Review Tour: The Color Of Summer by Anna Martin 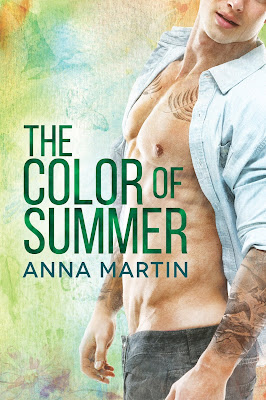 Reconnecting with Tyler helps Max settle back in, and it also leads to attraction. But when he tries to explore that connection at the grand opening of his tattoo studio—by kissing Tyler—awkwardness ensues. Max wants more, but has he misread Tyler’s signals?

As a single father raising a six-year-old daughter, Tyler doesn’t have much time to date. He’s ignored his attraction to men for years, but he can’t stop thinking about the kiss he shared with Max. If he can handle the complications of dating in a small town and the possible consequences to his career, this romance could blossom with all the colors of summer.

Oy vey! What happened here? I have 5-starred four of Anna Martin's books. I'm a fan of her writing style and can appreciate what she was going for with this small-town, sleepy, family-focused romance incorporating the "falling for my friend's older brother" trope.

The MCs take turns being half-hearted about the relationship. Initially, Tyler is leery of dating Max. The first time Max kisses him, Tyler tells Max he's not into men. But a couple chapters later, Tyler asks Max out on a date. He has moments of introspection, but for the most part, Tyler's sexual awakening seems to come out of nowhere.

Max is a tattoo artist who moved back to his small home town to be near his mom, who recently had a stroke. Max is fun and charming. He's crushing on Tyler, who's a cop and Max's best friend's older brother. Max is also not big into commitment, but he starts to fall for Tyler and Tyler's 6-year-old daughter Juniper.


I'm not always a fan of kids in romance novels, but June is a great characters. She's present without taking over every scene, and while she's clearly smart, she's still a kid. I liked the way she and Max interacted, especially when June was teaching Max sign language.

I didn't mind the slower pace of the story, which was interrupted by a dangerous situation Tyler gets involved in. This is really the only thing that happens in the story, and I was mostly okay with it, especially because it brought the MCs closer and lent an element of mild suspense to the plot.

What made me frown was Max's behavior in the last few chapters. He agrees to something only to immediately change his mind when his mom expresses her concern. I'm not even saying his mom was wrong, but Max is a grown-ass man and shouldn't let mommy make his decisions for him.


While the epilogue definitely throws a HEA our way, the story lacks that romantic vibe I crave in relationship-focused novels. Indeed, the MCs never utter the words “I love you." They THINK them, but they don't say them. Not cool.