Release Blitz: To Love and to Cherish by Tamryn Eradani

Kyle’s never been shy about going after what he wants. After two short term contracts, he wants something closer to permanent with Aidan. And what better way to bring them closer than to spend time apart? Being away from each other for the first time in their relationship might make them both realize they’d rather be together.

To Love and to Cherish
Tamryn Eradani © 2019
All Rights Reserved

Music filters through the speakers of the dance club, this song less deafening than the last. The singer’s voice is lower, crooning, and every beat of the bass reverberates through Kyle’s body. He moves with the music, chasing it, his movements too languid to ever completely catch it.

The guy behind him groans as Kyle grinds back against him. He splays his hands across Kyle’s hips and pulls Kyle back against him, as if there’s any space left between them at this point.

“You’re good at this,” the guy says, his breath hot against Kyle’s ear.

Kyle grins as he tips his head back against the guy’s shoulder. It shows off the long line of his throat, even in the dim lighting of the club. It’s a tease, all that skin, shiny with a sheen of sweat, more than Kyle meant it to be. The guy tightens his hold as he dips his lips to Kyle’s neck.

“Makes me wonder what else you’re good at,” the guy says.

Yep, definitely too much of a tease. Kyle stops the man’s hands from creeping up his shirt.

“I could persuade you.” He dips his thumbs into Kyle’s waistband. It’s his turn to grind against Kyle, and Kyle’s honest enough to admit the man’s packing a pretty persuasive argument.

It’s tempting, but he has someone even better waiting for him tonight.

“You can’t,” Kyle says, apologetic as he turns so they’re face to face.


The guy’s a couple of inches taller than Kyle, but he doesn’t make him feel small. He likes a bit of looming from his partners, and he’s met some people who pull it off even though they’re shorter than him, but this guy doesn’t manage it even with a natural advantage. It’s a good reminder that while this has been fun, this isn’t the guy he wants to spend the rest of his night with.

The man’s hands on are Kyle’s ass now. They roamed during the past two songs, touching what seems like every part of Kyle’s body. His skin is humming with it. He wants a harder touch, for them to slip under his clothes even though he just stopped the man from doing it.

Someone better is waiting for me at home.

It makes him wonder which of them he’s really teasing.

“One more dance or no?” Kyle asks, his tone light so the guy knows there’re no hard feelings either way.

He keeps Kyle like this, the two of them facing each other, as he draws him in closer. He’s rougher during this song, because it has a faster beat or because he knows this is the last few minutes he has before Kyle disappears into the crowd.

Honestly, Kyle doesn’t care what the reason is. He’s into the hands that try to touch all of him one last time and the press of the guy’s dick through his pants. He’s really into the way the guy loses the rhythm of the music as if Kyle’s more important than the dancing. By the end of the song, what they’re doing can’t be called dancing. Even with clothes on, it’s borderline indecent.

Kyle unwraps himself from the other man and flashes him a thumbs-up before heading to the bar for a drink. He asks the bartender for lemonade because he’s looking for a jolt of sugar.

He leans against the counter once he has his drink and looks out at the dance floor. It’s hard to see more than shapes, just a mass of bodies writhing together. He takes a drink, the coldness of his lemonade a contrast to his overheated skin.

He checks his watch. He has to stay here for at least a half hour longer. Probably more. He doesn’t want to seem too eager even though he is eager. All of this is to wind him up, and he’s not sure how much more of it he can stand.

He takes another long drink before he holds his glass to his forehead. His face is flushed, and he’s sweating. He’d worn one of his thinnest shirts in anticipation of a packed dance floor, and now it’s plastered against his skin, it’s practically see-through.

Once he finishes his drink, he leaves the cup and a tip for the bartender. There’s a line for the bathroom, and by the time he’s done, his clothes are sticky and uncomfortable from the sweat drying. Should he call it a night and head home? If he drives slowly enough, then he’ll show up at the earliest time he was given. He was hoping to make it a little longer, but the teasing will be worth it.

A guy with spiked hair and a hopeful smile slides up to him. He’s slimmer than Kyle and his cheeks are as pink as Kyle’s feel. He has eyelashes that make Kyle jealous, and his shirt, if possible, clings even more than Kyle’s is right now.

“You look like you’re trying to have a good time,” the guy says.

He isn’t Kyle’s type at all except he’s interested, and that’s Kyle’s biggest turn on, more than eye color or body shape or gender. Maybe it makes him vain, but he finds himself leaning toward the other man.

“Not too good a time,” Kyle cautions, because on a night like this, it’s important he doesn’t lead anyone on. Some guys assume he’s playing hard to get, and those are the ones he cuts loose after a dance. He is looking for a good time, but his end game isn’t anyone here.

The guy smiles, his teeth white and bright in the dark room. “That makes two of us.”

Kyle shrugs and lets the guy lead him to a part of the dance floor he hasn’t used yet tonight. It’s on the edge, in full view of the bar. Kyle prefers being in the middle of things, bodies packed tight all around him.

It takes a whole song for him to realize the guy’s looking over Kyle’s shoulder toward the bar.

Their plans for the night really are the same.

Kyle hooks his fingers through the man’s belt loops and tugs until he has his attention. “Do you have someone watching or someone you wish was watching?”

“Uh.” The guy’s gaze redirects to Kyle. He puts a few inches between them as if he’s nervous. He must see something on Kyle’s face that settles him because he says, “The first one.”

Which means whoever it is must be sitting at the bar. Kyle wants to turn around and see for himself, but he holds off. First, he runs his hands through the guy’s hair and tips his head back so they’re looking at each other.

“What am I allowed to do?” Kyle asks.

He knows all about putting on a show. Getting people’s attention is one of his best skills, and he’s more than happy to help this guy have his good night.

The guy’s eyebrows climb upwards. “You were definitely a good choice. You can do anything but kiss me.”

“Not hard. No marks.” His brow furrows. “Were you planning on it?”

“No, but you should be more careful offering blank checks to random guys you meet in dance clubs.” 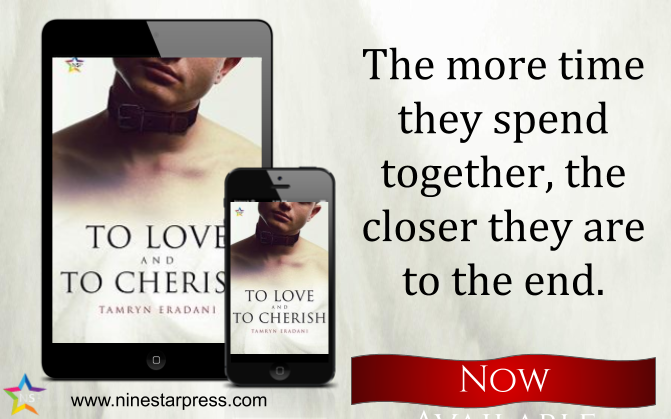 Tamryn studied English and Creative Writing in school but has been writing since she could first hold a pencil. Recently, she’s turned her focus towards writing erotica. She enjoys writing stories where sex comes first, then feelings, because doing things out of order can be fun.

Tamryn has spent the past few months writing the Daniel and Ryan series with a lovely view of mountains out her window, and she’s now searching for a new mountain range to serve as her backdrop as she begins her next project.