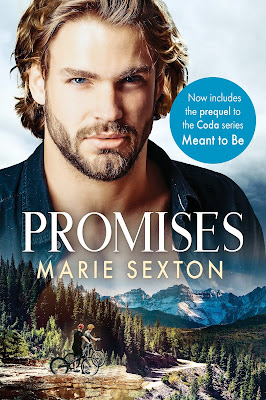 
Jared Thomas has lived in the mountain town of Coda, Colorado, his whole life. He can’t imagine living anywhere else. But Jared’s opportunities are limited—the only other gay man in town is twice his age, and although Jared originally planned to be a teacher, the backlash that might accompany the gig keeps him working at his family’s store instead.
Then Matt Richards moves to town.
Matt may not be into guys, but he doesn’t care that Jared is. A summer camping and mountain biking together cements their friendship, but when Matt realizes he’s attracted to Jared, he panics and withdraws, leaving Jared all too aware of what he’s missing.


Hello, everybody! I’m Marie Sexton, and I’m here today to celebrate the re-release of my very first novel, Promises. I wasn’t really sure what to talk about today, so I asked the members of my private Facebook group to give me some questions to answer. Here’s what they said they wanted to know.

I was curious to know if you did some changes on the new edition of Promises.

The book has been re-edited. Mostly that means I deleted a bunch of exclamation points and extraneous dialog tags and cleaned up passive voice. There are a few content changes, but most of them are so small, I doubt people will notice them. The one big difference is the scene where Cole comes for a visit. That scene has been expanded just a bit, much to Cole’s delight.

Do Jared and Matt know about / read RLP sports slash fanfiction? Or is their love for the game above such things?

I don’t think Matt and Jared would even be aware such a thing exists. Jared isn’t a reader at all. Matt reads a lot, but I see him being the guy who buys a box of used paperbacks at a yard sale without even bothering to read the blurbs. He methodically works his way through the box before donating them and moving on. I can’t imagine him looking around for fanfiction of any kind.

Did you base your town and the various locations on any real places? How much research went into the Coda series in regards to settings, etc?

Coda isn’t based on any real place. And I didn’t do much research. I’ve lived in Colorado most of my life. I’ve driven the various routes from Estes Park to the Front Range more times than I can count. (In my mind, Coda is about where Allenspark is - between Estes Park and Lyons on Hwy 7.) So it was more a matter of writing what I knew.

What are you habits for writing? Do you have to have certain plans before starting a new book?

Before starting a book, I need to know how it starts, have a rough idea of how it ends, and I need to know two or three key scenes along the way. In theory, I write on weekdays while my husband is at work and my daughter is at school. But really, I’m nowhere near that disciplined.

Have you ever thought of going off grid with a couple in a book and see how they make it in the outdoors?

I admit, I’ve never thought of this. I think Matt and Jared would do just fine, but it might be pretty damn funny to do to Jon and Cole.

As you are writing a series do you keep information on characters so you know who did who and who killed what?

I probably should, but no, I’m generally not that organized.

You had said that there would be a Coda/Tucker Springs connection in your next book--is that going to be a one book thing or are you planning on continuing that?

At this point, I only have plans for the one book, but I’ve learned in this business to never say never.

Does music inspire your writing? Do you have a soundtrack or theme song for your stories?


The simple answer is, sometimes. Matt and Jared’s song is “Savin’ Me” by Nickelback. (I know, everybody laughs at Nickelback. But this song is perfect for Promises, partly because of the “say it for me” refrain.) Shotgun was inspired by “Can’t Hold Back,” by Survivor. (And I’m pretty sure they have Nickelback beat when it comes to cheese.) Winter Oranges was written to “Counting Stars” by OneRepublic. But I have plenty of other books (like Trailer Trash and One Man’s Trash) that have no song or soundtrack at all.

Now that you have revisited them is there any chance we might see a short novella about where they all are now? Angelo have more to say?

I don’t have anything planned at the moment. But I’ve said that several times in the past and it hasn’t been true yet. ;-)

I’m curious how you got into writing? What drew you to romance, and specifically m/m romance when you don’t read it?

It’s kind of odd actually, because I’ve never been a romance reader. I used to read fantasy almost exclusively. Back in about 2007 or 2008, I read Lynn Flewelling’s Nightrunner series. At the end of the second book, the two male protagonists become a couple, and I was blown away. I don’t know why, but I found it so much more romantic and compelling than anything else I’d read. I started searching for more fantasy novels with gay protagonists. From there, I slid down a slippery slope into gay romance. I spent maybe 6-8 months reading every one I could lay my hands on (which wasn’t many, to be honest, because I was still reading paperbacks, and most bookstores didn’t carry gay romance). Then one day, I woke up with an idea in my head, and I ran with it. That idea turned into Promises. I haven’t really read much romance at all since I started writing it. I mostly read thrillers, horror, and mystery these days.

I'm a wee bit curious on the initial development, which character came first, Jared or Matt and was either 'voice' easier to write?

Matt and Jared arrived as a couple in my head. I actually had a dream about two men arguing in a hallway. I knew they loved each other, but one of them was deep in the closet and very conflicted about his attraction to the other. It took me a while to decide to dive in, because I wasn’t a writer. Outside of the creative writing class I’d taken in high school, I’d never written so much as a short story. But eventually, I started.

At that point, Jared definitely came easier. Promises is written entirely from his POV. But later, I ended up using Matt’s POV for The Promise, Putting Out Fires, The Letter Z, and Paris A to Z. Even ten years and thirty-odd books later, Matt is still one of my favorite characters to play with.

That’s everything! If there’s anything else you’d like to know, I’m always around and open to questions in my private FB group. You can find that here.

Thanks so much to My Fiction Nook for having me here today!