Blogtour: Coming Up For Air by Amanda Meuwissen 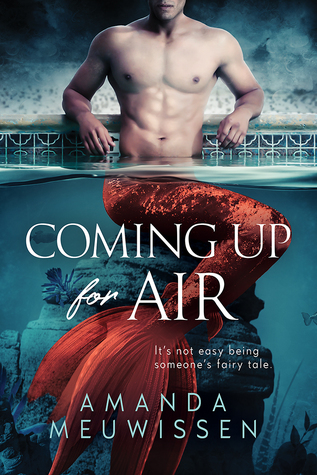 Writing often is (and I think should be) a community effort. My new release, Coming Up for Air, is dedicated to Regan Moore, an online friend of mine who is a master at coming up with prompts and matching imagery to inspire others.
In this case, she had the idea of a criminal being dropped in the river and then being saved by a merman who steps on land afterward to seek him out and find love, a sort of modern take on The Little Mermaid. I took that prompt, that starting idea, and ran with it, making it my own, but all because of the community of sharing and discourse that I’ve had the pleasure of participating in online.
I love when fellow writers want to take prompts I’ve come up with that I know I’m not going to write myself, and I have had so many inspirational ideas come from others, even if I end up changing a lot from starting idea to finished novel.
I often tell people that my favorite part about being an author is that we don’t compete with each other—or at least we shouldn’t. We compete with ourselves, to better ourselves with each new story, but we’re not fighting for the same readers. Readers want more to read all the time, so when we help each other, encourage each other, read and review for each other, we circulate a better community and make each other (and ourselves) more successful.

That’s why I never hesitate to offer to beta read for friends (when I have time, and sometimes even when I don’t) because I love seeing someone else succeed with their stories just as much as I enjoy success with my own.

Coming Up for Air allowed me to create not only a unique love story but some of my favorite side characters too, all my creation, but they never would have existed without Regan’s prompt. Copyright and being careful with our intellectual property are important, but so is coming together and remembering why we write to begin with—because we have stories to share.
I have more ideas in my back pocket for future books than I’ll likely ever be able to write, largely because of my online community of writers and readers. Thank you to everyone who has ever given me a prompt, whether I wrote a drabble from it or a novel, but a big thank you to Regan for giving me the inspiration for Coming Up for Air.

As author of the paranormal romance trilogy The Incubus Saga, young adult novel Life as a Teenage Vampire, the novelette The Collector, and superhero duology Lovesick Gods and Lovesick Titans, Amanda regularly attends local comic conventions for fun and to meet with fans, where she will often be seen in costume as one of her favorite fictional characters.

She lives in Minneapolis, Minnesota, with her husband, John, and their cat, Helga.