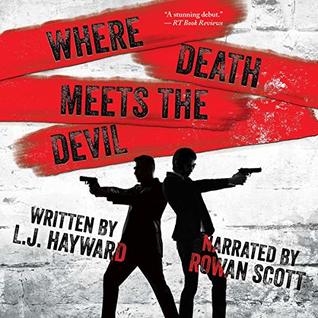 Jack Reardon, former SAS soldier and current Australian Meta-State asset, has seen some messy battles. But “messy” takes on a whole new meaning when he finds himself tied to a chair in a torture shack, his cover blown wide open, all thanks to notorious killer-for-hire Ethan Blade.

Blade is everything Jack doesn’t believe in: remorseless, detached, lawless. Yet, Jack’s only chance to survive is to strike a bargain with the devil and join forces with Blade. As they trek across a hostile desert, Jack learns that Blade is much more than a dead-eyed killer—and harder to resist than he should be.

A year later, Jack is home and finally getting his life on track. Then Ethan Blade reappears and throws it all into chaos once more. It’s impossible to trust the assassin, especially when his presence casts doubts on Jack’s loyalty to his country, but Jack cannot ignore what Blade’s return means: the mess that brought them together is far from over, and Ethan might just bring back the piece of Jack’s soul he thought he’d lost forever.

I tried...really I tried so freakin' hard but...

before I get to far down this rabbit hole I just need to say...no matter how hard I tried this one bored me. But in fairness to the book I think a solid part of the blame for this rest on my shoulders as well.

Honestly I've seen so many amazing reviews about this book that I'm not sure if any book stood a chance of meeting my expectations...yes, even my absolute #1 go to favorite because every book he writes is amazing author...Greg Iles, for those of you who don't already know this about me...well, I think even he may not have been able to meet the expectations that I had by the time I finally got to this audio book.

This was spies/hired assassins/espionage and I usually enjoy stories along these lines. But this time around the pacing was off and I just found that things were getting drawn out and taking to long to progress. I felt that this was at least due in part to the fact that things jumped back and forth along the time line on a fairly regular basis and for me the whole keeping track of whether events were in the present or the past just got to be a bit tedious and distracting resulting in me being distracted from my overall enjoyment of the story.

As for the characters Jack was ok. I didn't mind him nor did I really like him...he was there and as for the secondary characters they were there and truthfully no one really stuck out in my mind.


There were three things that were saving graces for me with this story...the first one was Ethan Blade. He was definitely both an interesting and unique character for this story. I love it when a character is morally ambiguous leaving the reader to wonder who is truly the hero and who's the villain or is it really a question that has a clear answer.

Overall the story line was solid and the connection between Jack and Blade lends itself quite nicely to future events both throwing these two men together as allies or possibly leaving them on opposite sides of a conflict. Whichever way it happens there are definite possibilities.

Last but not least Rowan Scott, a new to me narrator, did an excellent job of narrating this 10 hour and 31 minute story that was also by new to me author L.J. Hayward and played a very definite role in getting me through this one from start to finish.

While this wasn't an "over-the-moon-5-star-oh-my-god-give-me-more!" story for me. It was a story that turned out to be 'just ok' and also held some potential and I think for me the question is does it hold enough potential for me to want to continue with this series...right now my honest answer is "I don't know." but I will say if you liked this story I strongly encourage checking out the audio book...story aside I very much enjoyed the narration on this and I'm looking forward to opportunities to enjoy future narrations by Rowan Scott and as for the story mine is only one very dissenting opinion among the many who have read and truly loved this story so, in fairness to this story and yourself...sit back and check out the many other awesome reviews here on Goodreads before deciding.

An audio book of 'Where Death Meets the Devil' was graciously provided by the publisher in exchange for an honest review.

Reading give us someplace to go, when we have to stay where we are.  (Mason Cooley)