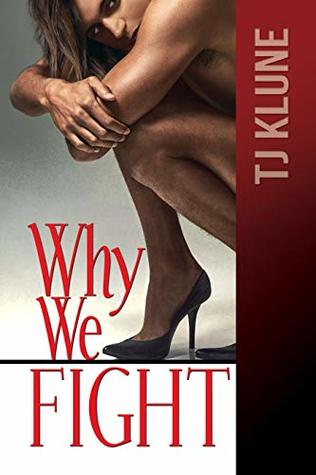 
Do you believe in love at first sight?

Corey Ellis sure doesn’t. Oh, everyone around him seems to have found their happy ending, but he’s far too busy to worry about such things. He’ll have plenty of time for romance after he survives his last summer before graduation. So what if he can’t get his former professor, Jeremy Olsen, out of his head? It’s just hero worship. And that’s the way it should stay.

Except that this summer, bigender Corey—aka Kori—is interning at Phoenix House, a LGBTQI youth center that recently hired an interim director. And because life is extraordinarily unfair, the director just so happens to be a certain former professor, now current boss.

Desperate to keep things professional as he and Jeremy grow closer, Corey makes a major mistake: he turns to his friends, Paul Auster and Sanford Stewart, for help.

But Paul and Sandy have some ideas of their own.

Set in the summer of 2016, Why We Fight is a celebration of queer life and being true to oneself… no matter the cost.

I feel somewhat bittersweet about Why We Fight, as I tend to with any series I enjoy coming to an end. This whole series is TJ Klune's trademark over the top comedic deliciousness, and Why We Fight is definitely funny. From the first chapter, I was having giggle fits and that continued throughout the book (and wait until you get to chapter 15).

Why We Fight takes place in 2016, before the election that brought to light just how much work we still have to do. Yes, there are some politics in this story. There has to be. We live in a time of bathroom bills and "religious freedom" laws. A time when the life expectancy of transgender women of color is 31 years. We've come a long way since my childhood, but we've a long way to go, still. While this book has so much humor in it, and ridiculous 80's movie plot situations, there is a thread of heaviness throughout.

I've been looking forward to Corey's/Kori's story since I first met them in The Art of Breathing. Being both bigender and biracial, they have had more than their fair share of life challenges. Growing up in the system offered even more. They are insightful, and amazing and I sure hope they decide to run for president, someday, because they also possess some amazing leadership skills and if anyone can change the world, it's them. As they would be the first to tell you, though, it's a team effort and we all need to work for a better future.


Jeremy Olsen is the son of Charlie's boyfriend, Robert, and a professor at the university where Corey/Kori is attending for their master's degree. There might be a little bit of a crush, there. It was easy to keep at bay during the school year because he was one of their professors and also because they were so busy. An entire summer working closely with him, though? They didn't stand a chance.

Jeremy was really the perfect person for Corey/Kori. Jeremy is 13 years older and settled in life. He doesn't make rash decisions and isn't impulsive. He's also not boring. Jeremy is full of life. He's a people person and he loves teaching and working at Phoenix House. Jeremy was a man looking for somewhere he fit. He was looking for people who really saw him and not just pieces. He had friends, sure, but no one who really knew him. He was lonely.

I enjoyed this book quite a lot, as I expected to. The ridiculousness of some of the situations Corey/Kori found themselves in made me so happy. There was even a bit of steam, which was hot and brought much needed relief (as temporary as it was) from all the delicious tension.

I feel bittersweet. I know I said that already, but it bears repeating. I feel sad that we're saying goodbye to characters that feel like family. But I also feel hope for their future.

Why do we fight? We fight for a better future. We fight to honor those who came before us; those that sacrificed so much. We fight because we must.

ARC of Why We Fight was generously provided by the publisher, in exchange for an honest review.