ARC Review: Starting from Zero (Starting From 1) by Lane Hayes 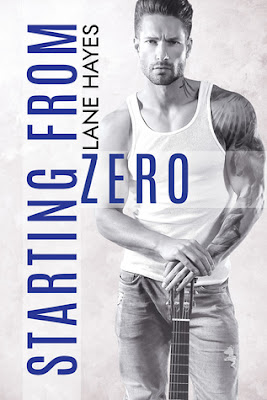 Gray Robertson has written dozens of hits and worked with some of the biggest names in the industry. But he’s never met anyone like Justin. The younger man is fiery, passionate, and smart. A powerful voice for a new generation. Other than an unforgettable one-night stand and a passion for music, the two men have nothing in common. Or do they? Justin knows the out-of-the-blue challenge to write a quintessential love song is a huge opportunity. And it’s the ultimate test for someone who’s doesn’t believe in happily ever after.

When sparks fly, Justin and Gray realize they have a shot something special if they start from zero together. Maybe even love.

It might make this too real. And it was already a little scary. Like finding yourself at the edge of a cliff where the view was incredible...and so was the fall.


I highlighted so many passages in this book. Lane Hayes' writing is DIVINE, and the dual first-person POV (not her usual style) added another dimension to an already complex story. I loved the unique voices of the MCs.

An aspiring song writer, Justin wants to get his band off the ground. Justin is a little rough around the edges. His brain goes a hundred miles a minutes; he's always thinking, always worrying.

Gray is a successful song writer. Eighteen years Justin's senior, Gray lives alone in a mansion with stunning views but without even a dog to keep him company. He's got a patchwork family and lives the good life, but something's missing.

Now I knew what it felt like to skateboard with my best friend, play guitar on the room, and make love with my eyes wide open and my heart fully exposed. Scary as fuck...but exhilarating.


Following a passionate night together (sex in a public restroom has never been so hot), Justin and Gray can't stop thinking about one another, and when Justin just happens to show up at Gray's house for a job interview (a surprise one at that), the two men connect like magnets.

The relationship angst is kept to a minimum, but the sex is on FIRE. Justin and Gray are positively smokin' when they're together.

The drama comes from Justin's band, eventually named Zero, trying to make it big. Justin is asked to collaborate on a song for a movie soundtrack with Gray and tries to get his band in on the deal. Meanwhile, Justin's bitchy ex-girlfriend is pressuring him to sign the contract, so she can have a moment in the spotlight, and Gray's ex, who's a big-time producer and just happens to be the band's manger's dad (stay with me), is a little jealous of Gray's relationship with Justin.

There's more to it than what I summarized, and at times the plot veered into melodrama territory, but it never crossed that fine line. Justin has to make some tough decisions, and both men need to own their bisexuality (Gray steps up in this regard with that beautiful scene in the last chapter!).

The epilogue gives us a sweet HEA, complete with kisses, cooking disasters, and a puppy!

This is a gorgeous story. I am so hooked on this series already (especially with all the great secondary characters serving as potential future MCs!).