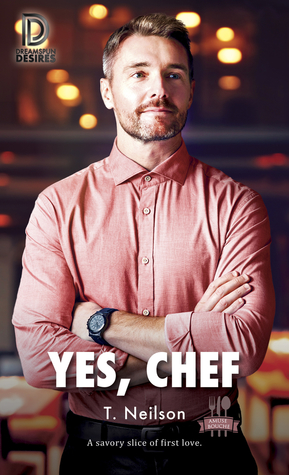 A savory slice of first love.

Simon’s dad died when he was young, leaving Simon to take the reins of the family restaurant business—and the responsibility for his mother and brothers. His commitment to his duty left Simon time for little else, least of all romance.

Argentinian celebrity chef Luke Ferreya has wanted Simon since their culinary-school days, but for Simon, family always came first. Now Luke’s back in Simon’s life—briefly before he returns to South America—and he’s determined to give Simon a sample of everything he’s missed out on.

Simon’s brothers are grown, and his mother is doing fine on her own, and Luke is offering a second chance for a future full of the pleasures of fine food, wine, and especially love. Without his obligations to hide behind, can Simon finally allow himself to say “Yes, Chef”?

Life in the kitchen gets hot, and restaurants are complicated

What happens when an old friend who is also a Michelin-starred chef walks into your little family restaurant in the middle of nowhere? And what happens when you realize you're in love with the man? Your maître d’ asks if you're going to faint, for a start.
That's what happens to Simon Love, the oldest of seven brothers, family patriarch, pseudo-dad, maintainer of the family business. Luke Ferreya, Michelin-starred chef, and culinary school compadre walks into the family restaurant in the middle of nowhere, USA, and sits down for a meal. And when that happens, Simon suddenly has to face the truth about who he is and what he wants.
As for Luke, if there was ever a man more tired of the food world, Luke can't imagine it. A talented chef and savvy businessman, Luke made it big in the world of fine dining, and hated every moment of it. Now he's leaving the food industry, and has sworn never to run a kitchen again. He's stepped into Simon's place before leaving the States for good, and nothing could make him stay. Except, maybe, Simon.

Someone touched his arm. Ginger, the maître d’. Her expression had gone from mildly amused to definitely and publicly amused. He bundled her out of sight of the chef’s table and the dining room.
“No,” he said, not sure exactly what he was addressing.
“Of course not,” she softly chided.
“No,” he blurted, “it’s not like that….” And then he glanced back around the corner at Luke because he couldn’t help it.
“Oh, boss,” Ginger said again, that time with a hint of scandal in her voice.
“It’s not.”
“It is.”
He shook his head. He had two gay siblings. He wasn’t gay. He wasn’t anything. He ran a fucking restaurant and a hotel. He was surrogate dad for six brothers. He looked after his mom. He didn’t have time for it.
Ginger nodded in the direction of the chef’s table. “Even I will acknowledge that one is awfully pretty to look at.”
Simon wished he could do or say something… anything. He wanted to locate some scrap of dignity and tell Ginger to mind her own business. Instead, all he felt was dizzy. Ginger gripped his forearms.
“Breathe, boss, or you’re going to faint.”
He wanted to slide down the wall and curl up into a ball or make a break for it and leave nothing but a Simon-shaped hole in the wall of the hotel. And Ginger wasn’t helping matters even a little.
“I’m not hot for him,” he hissed at last. “He’s a fucking two-star chef, and he’s here with a food critic, and I am woefully unprepared.”
Ginger gave him a look that was more than a little pitying. “Of course. Anything you say.”
He ignored that. “I’m going to the back. Call me if anything happens. If they ask for me. If they want to know about anything. Just….”


Ginger nodded. “Sure. You’re ready to wait on them hand and foot.”


“Damn right,” he answered. He didn’t exactly sprint toward his office. Not exactly.

T. Neilson is a writer and foodie who lives on Vancouver Island where the bread, beer, and coffee scene is a thing to behold. A romance writer since 2015, and a food industry die-hard for over a decade, Neilson decided to get out of coffee tasting and get into writing for good. These days Neilson spends a lot of time chasing after a toddler, thinking about upcoming books, and working toward the perfect hand-pie crust. It's not an easy life, but someone has to do it.