Hey! I’m Blue Saffire writing as Royal Blue. I’m probably best known for my Brothers Black Series, under my Blue Saffire pen name. However, I’m coming to you with my debut novel as Royal Blue, and I’m so freaking excited about it! If you know me then it’s the same pen game just a different lane. I’m still bringing that Alpha goodness with all of the feels and plenty of heat. I’ve got you on all fronts.

This book took me on an emotional rollercoaster that I loved. Kyle is a professional basketball player, struggling with past abuse, raising his nephew, and dodging a manipulative ex. Andy is a schoolteacher, self-conscious after a botched surgery. But together, two scarred souls can find love and healing.

Here’s a little taste! Have a peek. I promise you’ll want more. 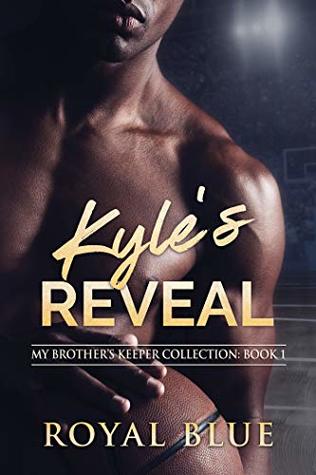 Some scars are on the body, while others exist only on the heart. But together, two scarred souls can find healing, love, and family.

Professional basketball player Kyle Tyson is suffocating beneath the weight of his responsibilities and his past. Childhood abuse left its mark, as did Kyle’s guilt over his sister’s death. Now, he’s trying to raise his young nephew, pursue his career, and dodge a narcissistic and manipulative ex who wants to out Kyle before he’s ready.

Schoolteacher Andy Connor found a shield in food as a boy, but that shield nearly took his life. He now bears the marks of a botched skin-tightening surgery following the dramatic weight loss that saved his life. Unfortunately, Andy’s scars have left him insecure about his body, causing him to find a shield in his shyness. Andy can scarcely believe someone like Kyle could be interested in him. But as they get to know each other, Andy starts to see himself through new eyes. Now if he can just help Kyle learn to love himself as much as Andy is growing to love him.


“Mason, do you want to tell me what happened?” I say gently.
I asked the principal to allow me to have a chat with Mason, before his guardian arrived, given that the boy had shut down and wouldn’t speak to anyone.
I care about all of my students, but this little boy has taken up a special place in my heart. He has been through so much in a short lifetime. He did well in the beginning. I’ve talked to Beth Ann, his teacher from last year. I remember him being a bright, outgoing student from the after-school program, but after the death of his mother he started to pull into himself, which is totally understandable. He’s five and has had such great loss. My heart bleeds for him.
“I don’t want to talk about it,” he pouts.
“Your uncle will be here soon. It would be helpful if I understood so I can explain things to him from your side.”
He turns his dark brown eyes up to me. His expression is almost pleading. He nods. I wait him out. Mason speaks so carefully for a small child, intent on selecting all the right words.
“Sean pushed me on the playground. My… my mommy wouldn’t like if I got in trouble for fighting. I need to be good. If I am, then maybe heaven will let her come back,” he explains, hope blooming in his voice.
It’s like someone just punched me through the heart. What do I say to that? I’d give anything to make this better for this sweet child, but I can’t help him with his ultimate wish. In my moment of silence, trying to find the right words, he continues instead.
“I tried to be the bigger man, like Uncle Beau taught me. But Sean pushed me again and started calling me names.” He shrugs his small shoulders. “So I put the brakes to him like Uncle Kyle would do.”
I bite my lip to keep from laughing. This is not the time to let my professionalism slip. Mason indeed put the brakes to Sean Novak. That little kid is a troublemaker and deserved the beatdown Mason gave him.
I’ve been trying to get Sean’s parents up here to the school for months. It’s funny how they appeared once their son became the victim. I don’t doubt that Mason’s uncle being Kyle Tyson had something to do with their sudden interest.
A loud groan sounds, pulling my attention. I lift my eyes to see the Kyle Tyson standing in the doorway of my classroom. I hadn’t thought about the chance of Kyle coming here, to my little classroom. I thought I’d have Mason back to the front office by the time of his arrival.
I’ve seen the man in passing a few times. Even at this distance his presence seems all-consuming. That deep, rich brown skin and those dark brown eyes are something to admire. The way his brows and lashes frame the windows to his soul displays something else entirely.
I feel like I’m being invited into a secret. Something dark and mysterious that only a precious few are able to get a glimpse of. I lower my eyes to his lips and have to keep myself from licking my own.
I’m five nine, but I’ve always been a sucker for taller men. Kyle has to be six five, maybe even six seven. His body reads every bit of the story of an athlete. Even the slight gaps to his stance send my pulse racing.
I shake my head clear. Kyle Tyson is like Jason Momoa—I’ll always have fantasies of him, but I’ll never have a shot.
Kyle moves into the room, squatting beside his nephew’s desk. His cologne is the second thing to engulf me, after his overwhelming presence. I watch silently, as Mason jumps into his uncle’s arms.
“I’m sorry. I didn’t mean to mess things up,” Mason sobs into Kyle’s neck.
“You didn’t mess anything up. I’m proud of you for trying to be the bigger man. You did what you needed to defend yourself in the end,” Kyle says softly.
“She’s not going to come back. I was a bad boy,” Mason whimpers.
Kyle’s dark eyes lift to meet mine, his thick brows knit. I can feel my eyes soften. Clearly he didn’t hear the beginning of our conversation. I place a soothing hand on Mason’s small back, as he sobs on his uncle.
I’ll explain, I mouth, not wanting to repeat the conversation in front of Mason. I think it’s something Kyle should have time to digest.
“Hey, buddy, I want to talk to Mr. Connor,” Kyle says. “Emma’s out in the hallway. Why don’t you go and say hi?”

I’m surprised by the feeling of irrational jealousy that hits in the pit of my stomach. I don’t know where it comes from. I mean this is Kyle Tyson, NBA player. I’m sure he has plenty of women in his life.
“Okay.” Mason sniffles, before taking off.
I shove my feelings back. Straightening in the little chair I suddenly feel ridiculous for sitting in, I turn my attention to Kyle.
Only you can manage to look silly in front of a god like this. Just great, Andy.


Kyle
I’ve seen Mr. Connor a time or two, and each time I’ve thought the same thing. This man should not be teaching children. He should be on someone’s magazine cover. He has the most striking blue-gray eyes. His square jaw is the only thing that keeps him from tipping over into pretty. His dark hair contrasts against his lightly tanned skin that yields to those full pink lips. There’s something about the way his long lashes cast a shadow over his cheeks, even with his lids open. His straight nose that’s slightly pointed at the tip. He’s a work of art.
Pushing that observation to the side, my mind turns to Mason’s words. My brows furrow. Mason hasn’t smiled as much as he used to in a long time. Still, the image of that long face and his sad eyes peering nervously at me tells me I’m going to be gutted when I get the answers I’m seeking.
“Just give it to me straight,” I blow out.
“Mason feels if he’s a good boy his mother will come back,” Mr. Connor says slowly.
I stagger to the side, bumping into the tiny desk next to my leg. It’s like I’ve just had my soul torn out. I’ve been trying to do everything I can to ease things for Mason.
“I… I don’t know what to do.” I voice the secret I’ve been holding since I lost my sister.
“You’re doing the best you can. He’s five. In time he will learn to understand she’s not coming back. I can suggest a counselor or two, if you like. I think the best thing you can do for him is be there,” he says soothingly.


I snort, drawing my hands down my face. “I’ve started camp for the season already, and preseason starts next month. I’ve thought about a traveling tutor and homeschooling, but he’s so little he needs friends, he needs to socialize. What was my sister thinking?”…

The color blue is known for trust and healing, as are the words of author Royal Blue. Blue started writing books to heal herself after losing her mother to breast cancer in 2007, followed by a miscarriage only eight months later. Books and words were one of the things that held her together.

As a young girl, Blue’s mother introduced her to the world of love and music through movies like Seven Brides for Seven Brothers, Bye Bye Birdie, and Neptune’s Daughter. Once she got her hands on books that sucked her into the magic that pages bring, an authoress was born. A story here, a few songs there, but she actually didn’t complete a manuscript until 2009.

However, books were piling up and collecting dust as fear clung and whispered evil thoughts. Yet, fear was silenced in 2015. Needing to write in order to breathe and wanting to share, Blue Saffire, Royal’s alter ego, rose from the ashes and entered the world.

The self-proclaimed hermit was born in Far Rockaway, NY, but is now a Long Island resident with her loving and supportive husband. The two work round the clock creating music and characters. There is no shortage of laughter or creativity in their home.

Never in a million years did she think the passion that saved her sanity would allow her to walk around with blue hair and spend her days dreaming of hot men to put on paper. After all, an MBA in Marketing and Project Management, as well as a MED in Curriculum Design and Instructional Technology, tell a very different story. Although, it’s safe to say Royal would rather be doing something Blue with her time.