Blogtour: The Doctor Takes A Detour by Bren Christopher

Hello everyone. I’m Bren Christopher and I’m excited to be here today to talk about my new release, The Doctor Takes a Detour. Thank you so much for joining me. During this blog tour, we’ll be chatting about the origin of the book, the research needed when writing a medical, and of course, all about the setting: my crazy home state of Florida. Please follow along as I go on this tour and comment for a chance to win the grand prize, a $25 Riptide gift card! The winner will be chosen randomly from comments across all tour stops. 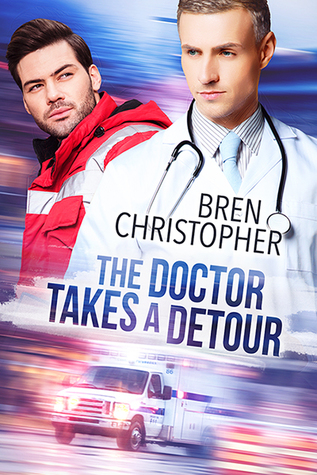 An unexpected detour sets two men on the path to love and healing.

After being attacked by a drug addict, Dr. Josh Parker fled New York, his career as an ER doctor, and a failed relationship. Determined to start fresh, he takes a job as a concierge doctor to the wealthy older population of sunny Naples, Florida. Nothing to fear there. No trauma. No stress.

It’s a good idea that doesn’t last long. Traveling to his new home, he discovers a car accident and is forced to make a detour to render aid. There he meets sexy paramedic Ian Manolas.

Since Ian returned from the Army, every day has been a struggle to atone for past mistakes. The Glades Free Clinic is his chosen path to redemption. The people Ian helps are a world away from Josh’s wealthy clients though. Addicts, prostitutes, gang members: they all come to Ian’s clinic for help, not judgment. He’ll do almost anything to keep the clinic going, including roping in one reluctant—and hot—ex-ER doctor.

The attraction is immediate, but Josh wants nothing to do with Ian’s clinic. For them to have a future, both men must work together to find a path to love, while helping those who need them most.

The Setting
Florida! Oh, Florida. So wacky and weird. A state divided against itself, so it seems at times. At least, as evidenced by the results of the many elections which are so close as to need recount after recount. But this just reflects the diversity that is Florida.

I chose Naples as the setting because it seemed the best place for the kind of concierge medicine that my doctor decided to practice after leaving the big city ER. Naples is a place of contrasts. On the west side of Florida, the beautiful Gulf Coast is filled with the wealthy elderly population, but just inland live the economically disadvantaged in the swamps of the Everglades and only two hours away is the rich cultural diversity of Miami.
Having visited the area many times, I knew what a great setting it would make and in fact, I used the Everglades in a previous book, Big Cypress Crossroads. That book was a gay romance as well, but more of a mystery and not a medical romance.

Bren Christopher is a multi-published romance author who currently resides in Florida. Although Bren has always been an avid reader in every genre, it wasn’t until she discovered gay romance that the characters who had been content to reside in her imagination started insisting they needed a wider audience. She has a lot of fun helping her folks come to life, and hopes the reader has just as much fun getting to know them.

Bren loves to hear from readers, so stop by her website or keep in touch via Facebook.


To celebrate the release of The Doctor Takes a Detour one lucky person will win a $25 Riptide Publishing gift card! Leave a comment with your contact info to enter the contest. Entries close at midnight, Eastern time, on April 13, 2019. Contest is NOT restricted to U.S. entries. Thanks for following along, and don’t forget to leave a way to reach you!