Themes: Learning to trust, regaining faith in your own abilities

Medium and clairvoyant Simon Kincaide owns a Myrtle Beach boardwalk shop where he runs ghost tours, holds séances, and offers private psychic readings, making a fresh start after his abilities cost him his lover and his job as a folklore professor. J

aded cop Vic D’Amato saw something supernatural he couldn’t explain during a shootout several years ago in Pittsburgh and relocated to Myrtle Beach to leave the past behind, still skeptical about the paranormal. But when the search for a serial killer hits a dead end, Vic battles his skepticism to ask Simon for help.

As the body count rises, Simon’s involvement makes him a target, and a suspect. But Simon can’t say no, even if it costs him his life and heart.

Buy Links and Listen to a sample here:

***The second book in the Badlands series, Lucky Town, is up for pre-order on March 29,

and the third book, The Rising, is coming soon to audio***

Good times in the Badlands!!!

It's been years since an encounter of the supernatural kind sent police officer Vic D'Amato away from Pittsburgh to Myrtle Beach looking for a fresh start. So the last thing he's looking for is an attraction to someone like Simon Kincaide...someone who runs a shop that caters to the those interested in the paranormal with ghost tours, seances and private psychic readings...someone with psychic powers of their own.

But that's exactly what happens when the search for a serial killer pushes Vic to take desperate measures when every lead that the police have in the case comes up as dead as the killer's victims.

Vic's more than a little resistant to both the idea of accepting help from Simon and being attracted to him...after all magics not real...is it? and Simon's been burned before by someone he should have been able to depend on...someone who was suppose to love him, but when the going got tough...that person got going and Simone found himself alone during one of the worst times of his life.

Vic and Simon have a love to hate you/hate to love you relationship but the one thing that they can both agree upon is that there's a killer that needs to be stopped.  These two were a prime example of we don't always get to pick the people we love. Despite all the reasons that they wouldn't work as a couple neither man is immune to the attraction that they share.

The relationship between these two was not only a slow start, it also held a definite one step forward, two steps back dance to it and I felt like that was very much due to the past relationship history that each of these men had...both of them were coming out of a relationship that for their own reasons ended badly and left them both a bit gun shy. So the shaky start they they got on their romance for me felt kind of natural if not inevitable.

However, on the professional side of things the main thing that bothered me was the fact that Simon was very adamant that if he called the police they wouldn't help...so why call them? And for me it seemed like Simon was in a damned if I do and damned if I don't situation which I think if we'd been given a stronger sense of any failed efforts in Simon's past to obtain police assistance would have helped to validate his reluctance to contact the police in the current situation giving Simon's point of view validity.

An audio book of 'Badlands' was graciously provided by 'Gay Book Promotions' in exchange for an honest review.

Other books include Witchbane, Burn, Dark Rivers, and Badlands. Watch for more in these series, plus new series coming soon! 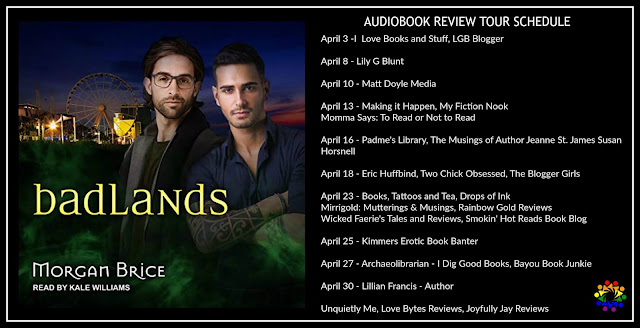