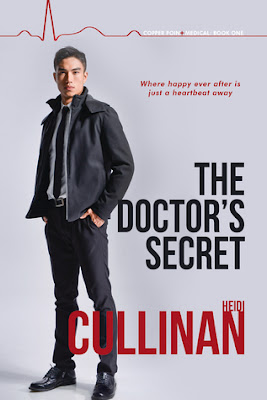 
Dr. Hong-Wei Wu has come to Copper Point, Wisconsin, after the pressures of a high-powered residency burned him out of his career before he started. Ashamed of letting his family down, he plans to live a quiet life as a surgeon in this tiny town. His plans, however, don’t include his outgoing, kind, and attractive surgical nurse, Simon Lane. The problem is, St. Ann’s has a strict no-dating policy between staff, which means their romance is off the table, unless they bend the rules. But a romance that keeps them in the closet (literally) can’t lead to happy ever after.

Simon doesn’t want to stay a secret, and Hong-Wei doesn’t want to keep himself removed from life—not anymore. To secure their happiness, they’ll have to change the administration’s mind. But what other secrets will they uncover along the way, about Copper Point and about each other?

Let's begin with Aaron Yan, who, according to Simon, looks a lot like Hong-Wei. Can we just agree that Aaron Yan is ridiculously gorgeous? Also, rumor has it that he's very gay. So is Dr. Wu: gorgeous AND gay.

Hong-Wei being Taiwanese is just the icing on an already decadent cake for Simon, although he is mildly disappointed to find out Hong-Wei isn't one for K-pop.

One of my favorite things about Heidi's work is that she seeps her books in pop culture and music. I still remember the songs Mitch & Sam (from Special Delivery) danced to in Vegas and cannot listen to RuPaul's Sissy That Walk without thinking of Baz & Elijah. While reading The Doctor's Secret, I had an overwhelming urge to crank up some K-pop.

I loved many things about this story:


- lack of relationship drama (it's pretty much love at first sight for the MCs, although they don't rush into a relationship);
- tight-knit friendship between Simon and his two besties, Owen and Jared, whose stories are coming up in books 2 and 3 of the series;
- heart-melting HEA (Hong-Wei's performance is everything!);
- focus on family (the one you're born into and the one you make);
- small-town setting with secondary characters that came alive on page (shout-out to the staff of the China Garden, Hong-Wei's supportive sister, Simon's mom, and pretty much everyone who worked at the hospital). There were so many fantastic supporting characters here, yet they never detracted from the story;
- medical drama worthy of ER (Hong-Wei performs an intense surgery, saving a man's life);
- and, of course, an Asian MC.

Let's talk about that last item for a second: Hong-Wei is Taiwanese. He immigrated to the States as a 10-year-old and is a brilliant surgeon. He is bilingual and proud of his heritage. The best part? He doesn't have "exotic" green eyes. His mom isn't Irish or whatever. He doesn't need to have white mixed in to be amazing!

I was the same age as Hong-Wei when I arrived in America, so I could relate to much of his experience, particularly the desire to be the best, to show your parents that leaving their life behind was worth it because their kids will live the American dream. (Let's face it: this is mostly a myth, but it's one immigrants still cling to.)

As I mentioned earlier, the relationship angst is pretty much MIA. Simon resists Hong-Wei's romantic gestures because he worries about being fired. The hospital where he and Hong-Wei work (Simon as a surgical nurse, Hong-Wei as a hotshot new surgeon) has a strict no-dating policy. Everyone is up in arms about this policy, although, honestly, I didn't find it that unusual; many workplaces stipulate that you can't date your supervisor.

All the tension in this story stems from this no-dating-colleagues rule. We are privy to hospital politics, especially as they relate to the board of directors, a bunch of old cronies who are completely out of touch with reality. This issue is resolved at the end, somewhat abruptly, I'd say.

Another thing I must mention is that the steam in this book is subdued. There's but one on-page sex scene about halfway through the story, and that's all she wrote. Granted, the romance is out in full force. Hong-Wei and Simon positively dote on each other, but I still would have appreciated more carnal pleasures.

Even so, The Doctor's Secret didn't disappoint. I loved the hospital setting and am dying (DYING!) to read the next book in the series.