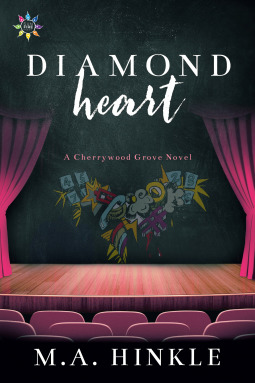 Gareth has a problem. He got expelled. Now he and his twin brother, Morgan, have to start over at an artsy new private school, and it’s all Gareth’s fault. Not to mention Morgan’s crippling social anxiety and Gareth’s resting jerk face aren’t making them any friends, and their father is furious with him. Gareth could live with this, but Morgan’s mad at him too, and Morgan is the only person alive who can make Gareth feel guilty.

Good thing Gareth has a plan. Cute, bubbly Felix, a student at their new school, has a crush on Morgan, and they both want to act in their school’s production of Midsummer Night’s Dream. Gareth figures it’s the perfect way to help Morgan come out of his shell and set him up with Felix. Then, maybe Morgan will forgive him, and Gareth can go back to not caring about anything or anyone.

But Gareth has another problem. He’s been cast as Oberon, and Felix is Titania. Oh, and Morgan doesn’t like Felix back. And maybe Gareth is enjoying the play and making new friends and having a good time at his new school. And maybe—just maybe—he’s got a crush on Felix. Can Gareth keep up his tough-guy act long enough to repair his relationship with Morgan, or will Felix get caught in the fallout of Gareth’s dumb schemes?

I FLOVED the first book in this series. I had high expectations for this one also, hoping to get Felix's POV, but realized from the blurb that we'd be hearing from Gareth, brother to Felix's initial love interest Morgan.

This book runs somewhat in parallel to Death Of A Bachelor. Gareth and Morgan are new to the school that Felix attends. Morgan suffers from sometimes severe anxiety and Gareth pretends to be a foul-mouthed punk who will fight anyone that comes even close to bothering his brother. What also doesn't help is that their father, according to Gareth, is remote and disinterested yet expects Gareth and Morgan to meet his standards.

Gareth is not a reliable narrator, obviously, and this book spends a whole lot of time on teenage angst. Where the first book had snarky one-liner after snarky one-liner, this second offering veered too far into mad-at-the-world-teenager territory for it to be fully enjoyable for me. Perhaps I should have realized it from the blur.

I did like many aspects of this book, and the story-telling prowess of the author is evident. There are many scenes during which I was able to empathize with Gareth. This isn't really a romance as such, but more so an account of a teenage boy rebelling for reasons that make sense to him, pushing people away out of fear that they'll let him down anyway, and secretly pining after the kind of warmth Felix's family gives off.


The school Gareth, Morgan, and Felix attend is chockful of the entire rainbow, with many of the students being into the arts and/or music, and everyone being accepting of LGBTQ students, without a single eye being batted, which doesn't sound entirely realistic but more like wishful thinking. It'd be awesome if that sort of thing existed, and maybe a school focused on the arts, on music, and liberal arts in general is more likely to support and embrace diversity.

At its heart, this book is about growing up, dealing with grief and anger and feeling misunderstood, which we often see in YA fare. I would recommend this book for older teenagers and young adults.