Book Review: Lost in a Moment (Trials of Fear 4) by Nicky James 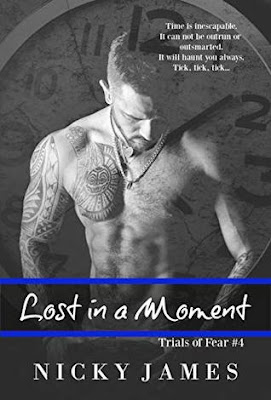 
One moment in time, one unfortunate accident, and Grayson Brooks’ life changed forever.Not only is he suffering physically, but as each day passes, he’s convinced he’s losing his mind. Terrorized by each passing minute, fighting to get back on track, Grayson only succeeds in slipping further into the clutches of his anxiety. He’s convinced time will heal all wounds. But time is his enemy. There is no escape.

Beckett O’Keefe has known Grayson all his life. Best friends to the end, he’s determined to help Grayson recover from his accident. Taking Grayson under his roof while his physical injuries heal seemed like a good idea at the time. But every day, Grayson slips further out of reach, and Beckett struggles to understand what haunts his friend’s mind.

To make matters worse, their close proximity has brought on feelings Beckett can’t understand. Beckett is straight… or so he thought. The heart says one thing. The mind says another. Has Beckett spent thirty years in the dark? Could he be falling for his best friend?Except, Grayson is only a shadow of the man he once was. If Beckett can’t help Grayson get back on track, there may be no future.

Have you ever been so engrossed in something, time slipped through your fingers like quicksand? You blink and realize hours have passed. When we're young, days seem to last forever, but as we get older, time speeds up.

After being trapped in his cold and dark basement for 60 hours, Gray lost the lower portion of his right leg and his sense of time. Now he's afraid of the dark and obsessed with clocks. Sometimes time moves so fast, Gray's entire world spins.

Lost in a Moment follows Gray and his best friend Beck, and contains hurt/comfort, best-friends-to-lovers, and bi-for-you themes.

Beck asks Gray to move in with him following Gray's accident so he can care for him. Gray is independent and doesn't want to burden anyone, but it's either his parents or Beck, so he chooses Beck. Never mind that being around his friend, the one he's had a crush on for ages, will be sheer torture.

Oh, and there's only one small bed. Plus, Beck already shares his flat with thousands of antiques and oddities, not to mention the Beatles: John and Paul, the beta fish; George, the mouthy parrot; and Ringo, the murderous cat. "Ringo did it," is George's mantra, and he's usually right.

I mention the Beatles because I love that Nicky James can weave in humor in the middle of an angsty story.

Beck worries about Gray's mood swings and nightmares, but anytime he tries to talk to Gray, Gray deflects. Beck also goes through a crisis of his own as he discovers that he has sexual feelings for his best friend and can't stop thinking about their explosive morning groping.

But before the men can be together, both need to overcome their insecurities and fears. Beck needs to get over his sexual crisis, and Gray must cope with his chronophobia.

This book is a complete standalone, but I recommend the entire series.