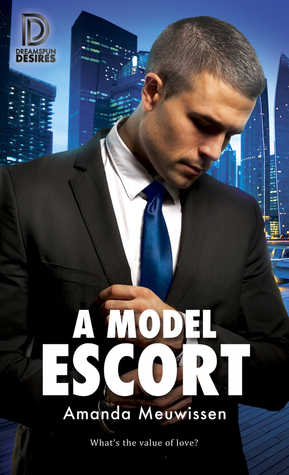 What’s the value of love?

Shy data scientist Owen Quinn is brilliant at predictive models but clueless at romance. Fortunately, a new career allows him to start over hundreds of miles from the ex he would rather forget. But the opportunity might go to waste since this isn’t the kind of problem he knows how to solve. The truth is, he’s terrible at making the first move and wishes a connection didn’t have to revolve around sex.

Cal Mercer works for the Nick of Time Escort Service. He’s picky about his clients and has never accepted a regular who is looking for companionship over sex—but can the right client change his mind? And can real feelings develop while money is changing hands? Owen and Cal might get to the root of their true feelings… if their pasts don’t interfere.

Text or Screen – which medium tells the best stories?
I created my own second major in college combining Creative Writing, Film, Media Studies, Acting, and Directing into "Creative Writing for Text & Screen," specifically looking at adaptation.
I studied novels, plays, television, and film, and asked the question of which stories were best told in certain ways and why. I even had the luxury of studying abroad in England and taking a course on adaptations of Shakespeare, where we read several plays, analyzed film adaptations, and created a screenplay script of our own to adapt the last play we covered – The Winter’s Tale.
Obviously, the answer to this overarching question isn’t that one medium overall is better than another, but that when using certain mediums, the way a story is told needs to change.
I can be a dialogue-heavy writer, so my style naturally lends itself to screenplays. A big different between setting a scene in prose versus a play or screenplay, however, is that you need to be concise to clearly get across everything a director or actor needs to know to convey the correct intent to the audience.
In prose, as the author, you have to do the work of the director and actors yourself, you’re all there is, so sometimes more is needed, and sometimes less can have an impact that simply can’t be translated with a performance.
Take Fight Club, one of my favorite books, as well as one of my favorite movies, but you know…I like the movie better, and even the author has said that he prefers the movie ending. Books can have softer endings and still leave us with catharsis, but often movies need to end bigger to leave a lasting impact.

The Fight Club movie ends with an explosion, while the book ends in a hospital room. Very different images and feelings evoked and—without giving spoilers for anyone unfamiliar—a complete 180 of the ending content.
This was also a case where the filmmaker chose to make use of voiceover narration that allowed for a lot of book moments to translate directly. Narration isn’t always the answer, but when it works, it can show a look inside a character’s mind that’s usually only reserved for narratives in novels.
My number one favorite book of all time, however, is Good Omens, so you can imagine my excitement that it is finally getting an adaptation in the form of an Amazon Prime TV series slated for release in May. I am extremely curious how they are going to get across the genius humor inherent in the narrator’s voice, especially since the book includes asides and notations, something I’ve never experienced in another fiction book.
Maybe they’ll have a voiceover, maybe not. Maybe it will be a successful adaptation, maybe it won’t, but this is definitely a case where the adaptation can’t simply be the book put to film exactly as it is.
How often do we hear, “the book was better,” but WHY? That’s part of why I was so interested in the topic for my major, because there are cases where adaptations are wonderful, or where something that was a movie, film, or play first should never have a novelization.


It’s all subjective, but it makes me stop and wonder what do I love in a good book, a good movie, a good series, and what are the differences? I can tell you that strict faithfulness does not a good adaptation make. It’s so much more than that, and sometimes straying from the canon material is necessary to make the most of the medium you’re in.

Amanda Meuwissen is a primarily gay romance writer, as well as Marketing Operations Manager for the software company Outsell. She has a Bachelor of Arts in a personally designed major from St. Olaf College in Creative Writing, and is an avid consumer of fiction through film, prose, and video games. As author of the paranormal romance trilogy The Incubus Saga, young adult novel Life as a Teenage Vampire, the novelette The Collector, and superhero duology Lovesick Gods and Lovesick Titans, Amanda regularly attends local comic conventions for fun and to meet with fans, where she will often be seen in costume as one of her favorite fictional characters. She lives in Minneapolis, Minnesota, with her husband, John, and their cat, Helga, and can be found at www.amandameuwissen.com.