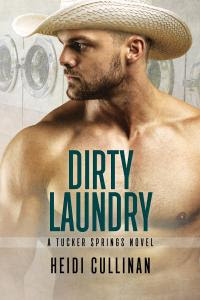 Sometimes you have to get dirty to come clean.

When muscle-bound Denver Rogers effortlessly dispatches the frat boys harassing grad student Adam Ellery at the Tucker Springs laundromat, Adam’s thank-you turns into impromptu sex over the laundry table. The problem comes when they exchange numbers. What if Adam wants to meet again and discovers Denver is a high school dropout with a learning disability who works as a bouncer at a local gay bar? Or what if Denver calls Adam only to learn while he might be brilliant in the lab, outside of it he has crippling social anxiety and obsessive-compulsive disorder?

Either way, neither of them can shake the memory of their laundromat encounter. Despite their fears of what the other might think, they can only remember how good the other one feels. The more they get together, the kinkier things become. They’re both a little bent, but in just the right ways.

Maybe the secret to staying together isn’t to keep things clean and proper. Maybe it’s best to keep their laundry just a little bit dirty.


Reissuing March 29, 2019 by Dreamspinner Press. Title is revised with some significance and expanded from original release.

Adam stood in a gas station restroom across from Lights Out, staring into a cracked and faded mirror, coaching himself out loud. “You can do this,” he repeated for what had to be the tenth time. “You can do this, Adam. You can do this.”
He didn’t believe it any more than he had the last nine times he’d said it to himself.
Stop by, Denver had said. Stop by Lights Out, like it was no big deal. It wasn’t a big deal to most people. However, Adam wasn’t most people, a point driven home by the fact that he was nearly hyperventilating over the dirtiness of the restroom and how he’d be wiping off his phone with a Wet Wipe before putting it back in his pocket.
He should have set things up better. He should have said he’d stop by another night, though the same problems would exist whenever he went. At least then he could have thought up a plan. He could have figured out how to get all the Bug Boys but Brad to come to the bar with him. He could have worked up more courage so he wouldn’t be swimming in a sea of Xanax.
He could have grown wings and flew.
I can do this, he told himself, trying to stop the spiral of self-loathing before it got out of control. All I have to do is go into the bar. Walk through the door, say hi to Denver, and see what happens. It’s not hard. People do it all the time, and they’re just fine. I’ll be fine too.
He’d be fine. Everything would be fine.
So long as no one slipped anything into his soda.
So long as he didn’t lose his cab money and have to walk home.
So long as he didn’t get jumped by hooligans in the alley.
In the mirror, Adam’s countenance went pale. He shut his eyes, drew a deep breath, and whispered to his reflection, “I can do this. I can do this. I can do this.”
He had on his usual club shirt, its familiar fabric like armor to Adam, but it made him nervous too. He’d been vain and gone without glasses, but now he obsessed about his contacts, whether he’d washed them enough, whether they had rolled back into his eyelids, whether they had defied factory tests and glued themselves permanently to his cornea.
The contacts, he knew now, had been a horrible mistake. He hadn’t counted on being this nervous when he’d put them in.
He should have waited to go out with the Bug Boys. Safety in the swarm, that was the joke, or it had been. That group, for him, had been fractured since Brad. The lab, the friendships, everything. He wasn’t ever sure if it was real or his imagination, if the others truly didn’t talk to him as much now or if that was simply how it seemed. Maybe they’d all been part of a fantasy of inclusion. Or maybe he was making his life a melodrama for no reason.
Feelings aren’t facts.He had this taped to the top of his bathroom mirror, over his kitchen sink, and a few other places now that he lived alone.
It was true, though, that he didn’t have anyone to go with him to Lights Out. The Bug Boys always went to bars closer to campus. If Adam asked them to go to Lights Out, they’d ask why. Which theoretically shouldn’t be bad, because they didn’t care that he was gay. In reality it would be, because they wouldn’t understand about Denver.
Adam wasn’t sure he understood about Denver.
Taking a deep breath, he tugged at his shirt, blinked to ensure the proper placement and lubrication of his contacts, and left the bathroom, using a Wet Wipe to turn the doorknob. It was a little hard-core OCD even for him, but he was determined not to let his disorder get a single foothold tonight. While things had been lonely since he’d left Crispin House, they’d been downright miserable since his encounter with Cowboy. All he could think about was how good it had felt. Not just the sex, but the way Denver seemed to be able to shut off his monkey mind like nothing else. He wanted that again. He wanted that so badly he ached.
You’re using him, his conscience whispered, and not for the first time.
Adam still wasn’t sure whether or not his conscience was right. Was he using Denver, or trying to? Did it matter if he did, if Denver consented? Really, it wasn’t like they had some kind of deep and abiding connection. They’d fucked in a goddamned laundromat. They hadn’t exchanged vows.
Adam still had butterflies when he got in line to enter the bar, but thanks to his drugs, he’d evened out. He could do this. He could totally do this. He was independent now, no more Brad. He lived on his own, and he’d never thought he could do that. He’d done his own laundry, which had gone a bit south, but then decidedly north.
This was about sex, pure and simple. He wasn’t trying to find a new Brad. He was angling for more hot sex. The new, independent Adam.
Or something.

What’s next for Heidi’s characters in Tucker Springs


Thanks so much for having me today! I’m here to celebrate the re-release of Dirty Laundry at Dreamspinner Press and talk about what’s next for me in the series.


A gay romance will be coming out next year from Dreamspinner, current title undecided. I’m not one hundred percent sure who the characters will be, but I’m pretty sure at least one of them will be one of the Bug Boys. Not Brad! Probably Ollie, but I’m in the early stages of planning so anything could happen. I do know I want to stick around the university. And of course Denver and Adam will play supporting roles, as will some of the guys from other books in the series.

Before you ask, yes, I do intend to write a story for Louisa, and she’s part of the other book I have planned. I see her more with someone from the Light District, maybe a shop owner. I’ve always wanted a good courtship arc for her, lots of wooing and camaraderie. But if the Bug Boy book is nebulous, hers is even more unformed! I’ll let the characters tell me where to go.

Writing in the Tucker Springs universe is always a pleasure. It’s not just that there are other authors present making the world richer, though that certainly is a plus. The world Marie and Lori built and allowed me to enter is such a great place. Who doesn’t want to go there? Of course, the goal is always to make the world as inviting to read as it is to write it. I’ll do my best to continue hitting that goal.

I hope you enjoy revisiting Tucker Springs, and I hope you look forward to new installments from me, L.A. Witt, and Marie Sexton.

Have you read Dirty Laundry’s first edition? What are YOU hoping I write about next in Tucker Springs?

Dirty Laundry is book three in the Tucker Springs series, a collaborative project between three authors. Find other books in the series at Dreamspinner Press and wherever books are sold.

Heidi is a two-time RITA® finalist and her books have been recommended by Library Journal, USA Today, RT Magazine, and Publisher’s Weekly. When Heidi isn't writing, she enjoys cooking, reading novels and manga, playing with her cats, and watching too much anime. Find out more at her website.