Audiobook Review Tour: Dance For You by Colette Davison 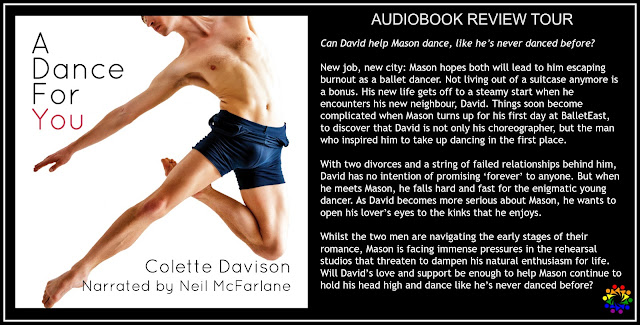 Book Title: A Dance for You

It’s the second of a pair of ballet-based books, but can be read as a standalone.

Can David help Mason dance, like he’s never danced before?

New job, new city: Mason hopes both will lead to him escaping burnout as a ballet dancer. Not living out of a suitcase anymore is a bonus. His new life gets off to a steamy start when he encounters his new neighbour, David. Things soon become complicated when Mason turns up for his first day at BalletEast, to discover that David is not only his choreographer, but the man who inspired him to take up dancing in the first place.

With two divorces and a string of failed relationships behind him, David has no intention of promising ‘forever’ to anyone. But when he meets Mason, he falls hard and fast for the enigmatic young dancer. As David becomes more serious about Mason, he wants to open his lover’s eyes to the kinks that he enjoys.

Whilst the two men are navigating the early stages of their romance, Mason is facing immense pressures in the rehearsal studios that threaten to dampen his natural enthusiasm for life. Will David’s love and support be enough to help Mason continue to hold his head high and dance like he’s never danced before?

Colette’s personal love story began at university, where she met her future husband. An evening of flirting, in the shadow of Lancaster castle, eventually led to a fairy-tale wedding. She’s enjoying her own ‘happy ever after’ in the north of England with her husband, two beautiful children and her writing.

‘A Dance for You’ is the second audio book by Colette Davison that I’ve been fortunate enough to enjoy and I admit I definitely enjoyed this one a bit more than ‘A Dance for Two’. Even though these books share a very similar title reading ‘A Dance for Two’ is not required in order for the reader/listener to enjoy ‘A Dance For You’. While we do meet Mason in the previous book and Luc, whom we met in ‘A Dance For Two’ is his best friend there’s really no over lap between that story and this so regardless of the fact that I’m glad, I listened to the audio book for ‘A Dance For Two’ I feel fairly safe in saying that it really had no impact one way or another on how much I enjoyed this one.

For me the fact that I enjoyed ‘A Dance for You’ more was directly attributable to other things…those things being in part…the subject matter. For Mason and David, the relationship issues were essentially twofold being their age difference and their work dynamics.

David is the guest choreographer for the production that Mason will be performing in at his new ballet company, BalletEast. So while their dynamic at present is one of employee/supervisor it’s not a permanent situation what is permanent is the age difference and since neither of these men are a minor and at no time did I feel like David was using his position to pressure Mason…I actually liked how the author dealt with both of these issues and as the story progressed they became non-issues for me.

The other issue addressed in this story that I found to be an interesting touch was the issue of bullying. We often times forget that this happens not just to children in the schoolyard but to adults in the workplace and while we don’t associate it with places that tend to present a more liberal minded attitudes it can and does still happen everywhere. I definitely appreciated how the author dealt with this because so often in the real world it’s the easy solution that’s taken and not necessarily the right one, as was the case here when it was the bully who was made to suffer the consequences of his actions as opposed to making the victim go away since it’s often times easier to make the victim go away than to make the bully accountable for their actions.

Neil Macfarlane was once again the narrator for this story, and I just didn’t feel like his voice held the same emotional level that was there during ‘A Dance for Two’. Don’t misunderstand; I’m not saying his voice was monotone because I didn’t feel it was that by any means either. So, this could once again very much be a case of it’s not you, it’s me; I may well find that listening to this another time and being in a different frame of mind it won’t seem this way, but for now it is what it is. While some things worked and some things didn’t work as well, at the end of things I’m left with a story that I enjoyed far more than I didn’t, and an author and narrator who have both gotten a spot on my radar as someone that I’d like to read and/or listen to again.

An audio book of ‘A Dance For You’ was graciously provided by the author in exchange for an honest review.