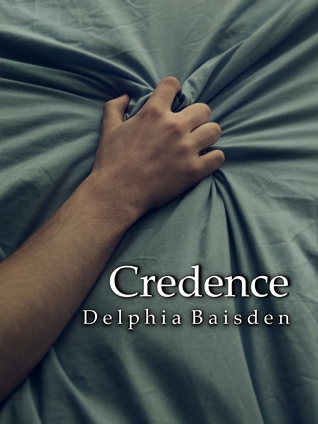 James Morgan, lead guitarist for the rock band Eden, seems to have it all. That is, until Theo, Eden’s lead singer and James’s secret lover, violently betrays him, sending James into a deep depression and cutting their current tour and the band’s life short.

Kieran Jackson, the lead vocalist for the less successful band Lost and Found, is at his wits’ end. At thirty-three, he never dreamed he’d still be opening for bands comprised of twentysomethings. When Eden pulls out of the last few shows of their summer tour, Kieran returns home burned out and heartbroken.

Over a year later, James, Phil, and David of Eden decide to reform under a different name with Kieran as their new vocalist. James, never having forgotten his single interaction with Kieran, nor the only time he ever listened to him perform, knows Kieran’s the best choice.

James is still closeted—and skittish after his last relationship—and one fumbling, drunken kiss threatens to undo everything he’s worked so hard to rebuild, as well as the cover he’s fought to maintain.

Can James overcome his past, confront his demons, and reclaim his former fame? Or will he and the newly formed True North remain in Eden’s shadow forever? Can he finally find comfort in who he is, accept his past, and reopen his heart? Or will the memories of Theo’s betrayal and the subsequent fallout dash any hope of finding—and trusting—love again?


Trigger warning: this book contains explicit rape, as well as one failed suicide attempt by a main character.

After thinking about it for some time, and then thinking some more, I feel it's only fair to give this book the full five stars.

Delphia Baisden has created an emotional, believable, and often heartbreaking story for which you should heed the trigger warnings. There is a graphic albeit short depiction of rape, and a graphic description of attempted suicide. If these are triggers for you, you may want to think twice about reading this book.

At its core, this is a novel of survival, of overcoming past hurts and acts of violence, finding strength in adversity, and finding love after pain and loss.

James Morgan is the lead guitarist for the rock band Eden, currently on tour, in the closet, and hiding a romantic relationship with the band's lead singer, Theo. Oh, and James is drowning his angst with alcohol more often than not. After one of their concerts, James is nearly pass-out drunk in Theo's hotel room when their make-out session turns violent and Theo takes something from James that wasn't his to take. The fallout from the rape brings about the end of their current tour, and James falls into a deep depression that culminates with him nearly committing suicide. Waking up in the hospital is a turning point for James but he's still haunted by what happened to him.

A year later, James and his bandmates (without Theo) are looking to start over and are in need of a new lead singer. Their search brings them to Kieran Jackson, whose band Lost And Found was on the same tour the previous year, opening for Eden. Kieran is hiding a bit of a secret as well.

The author did a fantastic job creating believable and relatable characters. It was heartbreaking to watch James fall deeper and deeper into the hole of depression, haunted by the memories, drowning his self-blame and self-doubt in alcohol, and contemplating ending his life to escape the demons. I hurt with him, flinched with him, and understood why he was blaming himself and why he felt he couldn't tell anyone what happened. I wanted to reach into the book and hug him and protect him and I watched with bated breath as he spiraled further and further downward.

Kieran too was tugging on my heartstrings. His tinnitus is interfering with his ability to hear clearly and causes some balance issues, though it hasn't affected his singing ability. He too is fighting demons of his own, not only due to his condition but also due to his perceived lack of success - he expected to be farther along in his career at his age, and is dispirited that he hasn't been more successful. What he is though is steadfast and supportive and patient and kind, especially as he and James begin to fall for each other. The tenderness with which he approached James made me sniffle more than once.


As James and Kieran become closer, their relationship grows steadily. I was rooting for them both, even as their romance unfolds slowly, understandably so. I cheered for James growing stronger, I cheered for Kieran starting to believe more in himself, and I rejoiced as they find in each other the solace they've been missing for so long. With crisp, fresh, and engaging writing, the author fully drew me into this novel, and I cannot wait to see what more she has in stock for her readers. The characters felt real, their interactions relatable, and the dialogue organic. There were a few moments when I sniffled, and there were moments when I laughed with the characters. Their bedroom interactions became increasingly more intimate and dripped with emotion.

As expected, Theo's reckoning comes as the truth about his actions finally comes out. I thought that once he had been given the consequences of his actions, we'd be done with the character, but the author did surprise me at the end. Can't say I expected that.

I also adored Phil, James' best friend. I think their relationship was giving James the foundation he needed to be able to trust someone again and open himself up to Kieran. Phil was supportive even if he didn't understand what was haunting James, and he was protective of him, and enraged on his behalf when the truth finally comes out.

This is not an easy read, considering how much angst is inside, but it is a worthy read. Don't expect to be able to put this book down once you start, and take your time to read every single word. There's not a superfluous scene nor any gratuitous sexy times, and the author appears to have done quite a bit of research for this novel.

So yeah... I loved this book. A fresh new voice. Gimme more!


** I received a free copy of this book from its author in exchange for an honest review. Thank you for being patient while I figured out what I wanted to say about your book.**

Buylink is provided as a courtesy. No affiliation exists between this blog and Amazon.