Release Blitz: Memoirs of a Triangle by Christine Twigg

When Edith instigates a new game with her two best friends, May and Peter, on a warm spring day in 1869, she ignites sexual awakenings that will influence and shape the rest of their lives.

Although Edith lusts for Peter, she is aware that May’s desires are directed toward her, and when their triangular involvement begins to splinter, she leaves her two best friends to begin a career in Boston.

However, even after choosing what they thought was the more stable path, they learn that the past is not so easily left behind.

On their separate, yet connected paths, they find themselves drawn together, experiencing eroticism, love, confusion, trust, and grief throughout the course of their lives.

Memoirs of a Triangle
Christine Twigg © 2019
All Rights Reserved

Seated in Ella’s suite at the Statler Hotel, Jeremy Harris looked at the yellowed papers Ella had put in his hand. A few moments later, he was leaning forward in his chair, completely absorbed. After several minutes, he set the pages down and looked at Ella questioningly.

“Is this what it appears to be?” he asked.

Ella nodded, sliding the remainder of the aged and stained papers over to him.

“I had a phone call from a Mr. Thomas Benson last week. He recently purchased Edie’s Fine and Rare Books, my mother’s old bookstore?” She paused, looking at him with raised brows to make sure he was following, and then continued, “Mother sold the business to her apprentice long ago, but apparently she retained ownership of the building. The last owner died, and it’s been untouched until now. Most of the inventory had been removed, but my mother’s office was exactly as it was when she was there. It was like a trip back in time, Jeremy,” she almost whispered.

“Mr. Benson tracked me down as the only person with rights to the contents. I came down the day after the call and I’ve been there all weekend. I found this file in the bottom of a drawer in my mom’s old desk. I almost threw it on the pile of trash, but something made me stop and read that first page…”

“I remember the bookstore,” Jeremy said wistfully, feeling the tug of something long forgotten. Aunt Edie, as he’d always known her, had taken him and Ella there many times when they were young children. “Just thinking of it now, I can remember the way it smelled: dusty and warm like all those old books, mingled with the scent of beeswax she used to polish the shelves.”

He looked into the past as he remembered the pile of large, worn cushions that sat on the floor near the front of the store. He smelled the warmth of books heated by the trapped sun and heard the ping of flies hitting the front windowpane. His eyes began to close as he heard the echo of the soft flutter of turning pages.

Ella had found a rough manuscript, written by her mother, Edith, with a prologue written by May, the woman who had given birth to Jeremy. Never really knowing what to call her, he had simply continued to think of her as Princess Maybelline.

The manuscript appeared to be the beginning chapters of a book about the somewhat shocking love affair Edith had had with Jeremy’s parents when they were in their late teens.

Ella had also found a package Jeremy’s mother, Eve, had sent to Edith after May died, containing May’s journals, a beautiful emerald pendant, and a few small paintings. She pulled two paintings out of a large, dog-eared envelope and gently nudged Jeremy with her bare foot, rousing him somewhat from his pleasant reverie. She used the same foot to slide a box over next to his chair.


Jeremy took the paintings in his hands, studying them. Tentatively, he ran his forefinger across the grooves of colorful, thick, oil paint. Tears began forming in his eyes, causing the colors to blur even more abstractedly. This was his real mother, the woman he’d heard fairy tales about as a small boy, come to life. He saw the worn journals, stacked neatly in the bottom of the box, and he felt the pull of a history that had shadowed him his whole life.

Ella saw he was overcome. She leaned in and put her hand on his shoulder and said, “Oh Jeremy… I’m sorry… She seems to have been a special woman.”

He picked up the pages again and continued to read… 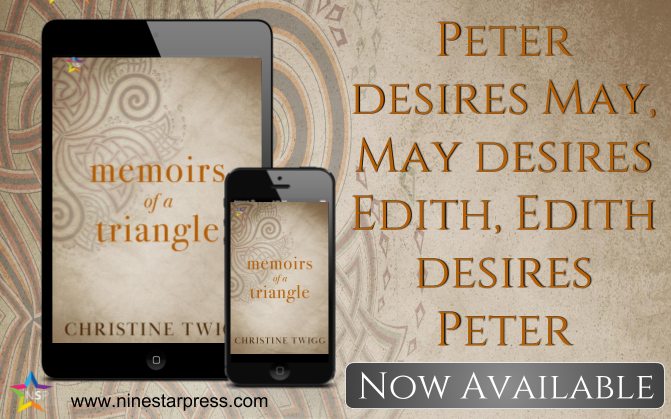 Chris Twigg lives near the shores of northern Lake Michigan. She is a healer, hypnotherapist and writer, along with being a mother, wife, and friend. She is an advocate of truth, honesty, and reason and believes in speaking her mind. Travel, good stories, nature and solitude fill her soul; feminism, politics, and equality fuel her fire.