Blogtour: Eye Of The Beholder by M.D. Grimm

Eye Of The Beholder


Hello everyone! My name is M.D. Grimm and I shall be your host today. Just want to say a quick thanks to My Fiction Nook for allowing me to visit with you all today.

To celebrate “Eye of the Beholder,” I wanted to share with you a short interview with Cassius, the Ancient Roman vampire that captured Vulcan’s heart. Since the story is entirely from Vulcan’s POV, I thought it would be nice to know Cassius’s thoughts on a few things.

This is M.D. Grimm joined by Marcus Cassius Vespillo, an Ancient Roman prefect and one of the oldest vampires alive.

Me: I really appreciate you sitting down and talking with us.

Me: Is there anything you want to say first before I start asking questions?

Cassius: I’m into younger men, history, and I enjoy long walks on the beach at night.

Cassius: I thought so.

Me: Let’s talk about your earlier life, before you became a vampire.

Me: Are you channeling Vulcan’s sarcasm right now?

Me: You agreed to this.

Me: As I stated earlier, you were a soldier for Rome.

Me: You also became a prefect and led a legion, correct?

Cassius: Yes. After I became vampire.

Me: Is there anything you can share with us about that?

Cassius: Blood, boredom, and death—the life of a soldier. I was dying and then I wasn’t. I became a special weapon for Rome until I grew tired of my nation’s depravity and left to travel.

Me: Where did you go first?

Me: Want to be more specific?

Me: You’re playing with me, aren’t you?

Me: It couldn’t have been easy to travel such far distances when the sun could easily turn you into a crispy critter.

Cassius: What a dreadful image. But you are correct. I had loyal servants to carry my coffin. They were my cherished retainers and my only friends.

Me: You didn’t seek out other vampires?

Cassius: No, not at first. Vampires are highly territorial, especially in those days. Many acted as dictators or even gods of more primitive human societies. They didn’t want an unknown vampire crashing their party.

Me: How many battles have you fought in?

Cassius: You really expect me to count?

Cassius: Let’s go with around one hundred.

Me: What were your favorite places?

Cassius: China, certainly. Egypt. Their monuments rivaled those of Rome. I have more affinity to desert areas. Although I spent a good deal of time on Britain, Ireland, and in Russia, I quickly grew sick of the cold, rain, and mud.

Me: Let’s move to modern times, now. What is your favorite modern invention?

Me: Rome had plumbing.

Cassius: Eh. Sort of. Nothing beats modern toilets and showers with multiple sprays. That shit is divine.

Me: Anything else strike you about modern times that are either different or similar to Rome?

Cassius: Everything moves faster. The world is certainly smaller with phones and internet. Rome would have conquered the entire world if they had even half of the technology currently in use.

Cassius: Humans are still as bloodthirsty as ever.

Cassius: While Reality TV is fake, it still bears resemblance to the gladiatorial games that were Rome’s favorite pastime. However, I think that Reality TV is more of a detriment to society than the games were. The games were real. Real men died. Slaughtered for the amusement of the crowd. But the things on TV are fake and so when a person sees a real crime they are shell shocked and unable to comprehend what to do. Both forms of entertainment end up numbing the viewer but at least Romans knew how to process violence. Present day violence is so remote or glamorized that the psyche of humanity is skewed.

Me: Yes, yes I did. Ahem. How about we move onto Vulcan?

Me: Was it love at first sight?

Cassius: Hmmm. I would say lust at first sight. I was intrigued by his intelligence and the excitement in his eyes when we met. I was in a... bad place mentally and he pulled me out of it by his enthusiasm alone. He’s a special man.

Me: And one that demands patience.

Cassius: Tell me about it.

Me: What was your first reaction to him when Cornelius introduced you?

Cassius: What is a human doing amidst so many vampires? And why the hell is he unclaimed?

Cassius: He amused me. He reminded me of a little puppy wagging his tail so hard his butt shakes.

Me: Don’t tell Vulcan that.

Cassius: Oh, I have. He’s cute when he’s irritated. His lips go all thin and his eyes narrow, and he looks like he wants to punch me.

Cassius: I’m able to distract him.

Cassius: You really want me to explain that?

Me: Probably not. Anything else about Vulcan you want to mention?

Cassius: I love him with every atom in my body. He’s also sexy as hell when he gets in his blacksmith mode and forges a sword. I just want to rip off his clothes and—

Me: Okay. Well. Thanks for that. Um... do you know your eyes are glowing?

Cassius: Hmmm? What? Oh. Sorry. I get that way sometimes when I think about him naked.

Cassius: If you don’t want the answers don’t ask the questions. Oh, excuse me. I just got a text.

Me: That’s okay. We should wrap this up anyway.

Cassius: He’s reminding me that the sun will be up in an hour, and that I should get my butt back to our coffin.

Me: Probably a good idea to listen to your better half.

Cassius: That’s been my experience.

Me: Well, thank you again for joining me, Cassius. And thanks to all you lovely readers for your interest in Vulcan and Cassius’s story “Eye of the Beholder,” out now, published by Dreamspinner Press. Don’t forget to check out my website and subscribe to my newsletter at www.mdgrimmwrites.com.

May dragons guard your dreams, 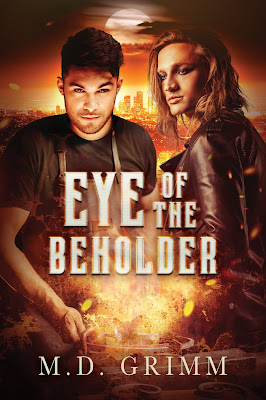 Is it better to risk it all… or never know what could have been?

After surviving an abusive childhood, Vulcan remade himself upon arriving in Los Angeles, California. He became a blacksmith for the paranormal community and strives to earn the respect of the vampire covens and werewolf packs that call LA home. He also prevents the pain of loss by keeping everyone at arm’s length.

But he never planned on meeting a former Roman soldier by the name of Marcus Cassius Vespillo. Something sparks between them and turns into a friendship he never considered possible. He can’t deny his intense attraction to the intelligent, courteous, ancient vampire. And it scares him.

Though Vulcan is wary of seeking more with Cassius, an attack leaves him at death’s door and forces him to reexamine his priorities. But Cassius has his own secret, one that promises tragedy and loss. And if that wasn’t enough, a slayer arrives in the States, one with a bloody connection to Cassius… and Vulcan himself.

M.D. Grimm decided to become an author in the second grade (kind of young to make life decisions, but whatever) and nothing has changed since then (well, plenty of things, actually, but not that!). Thankfully, she has indulgent parents who let her dream, but also made sure she understood she’d need a steady job to pay the bills (they never let her forget it!). After graduating from the University of Oregon and majoring in English (let’s be honest: useless degree, what else was she going to do with it?), she started on her writing career and couldn’t be happier. Working by day and writing by night (or any spare time she can carve out), she enjoys embarking on romantic quests and daring adventures (living vicariously, you could say) and creating characters that always triumph against the villain (or else what’s the point?), finding their soul mate in the process. 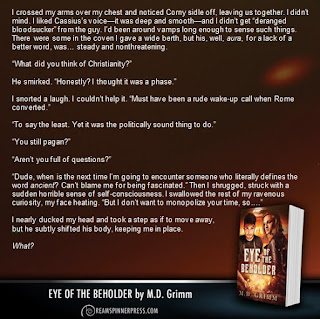