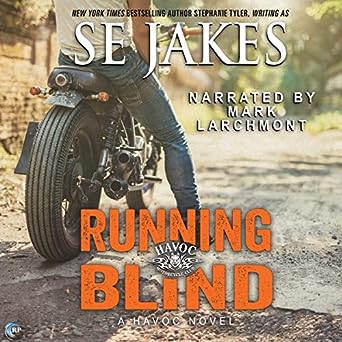 An ATF agent who lives for danger finds what he craves from an outlaw biker.

It’s impossible for a one-percenter motorcycle club member to simply walk away—and no one knows that better than undercover agent Bram, who’s almost killed for trying. His cover isn’t blown—yet—but it’s only a matter of time. The Heathens won’t be satisfied until he’s dead, so he decides to lay low and heal.

But when his younger brother’s disappearance throws a wrench into his plan, Bram ends up in Shades Run, a town ruled by the notorious Havoc MC. In less than twenty-four hours, Bram finds himself at the mercy of Sweet, Havoc’s president, as he throws himself into the undercover role of a lifetime: himself. A man who’s never belonged anywhere, and who will do anything to protect his younger brother.

When finding Linc seems impossible, Bram is torn between Sweet, Linc, and revealing his true identities . . . and there appears to be no way out. Once again, he risks it all trying to save it all. Only this time he’s got no backup to save him if he falls.

When I saw the title of this book I have to admit one of my first thoughts was I wonder if the author was a tiny bit motivated by the 1977 Jackson Brown song...'Running on Empty' when she picked the title for this book. I don't know about the rest of you but I graduated from high school that year? Anyways, it was just a random thought that floated through my brain when I saw the book title. The story not to confuse anyone is set in the present.

When Bram tries to leave 'The Heathens' Motorcycle Clue he learns the hard way that if getting in was painful getting out will damned near kill him. Bram's not really a biker but if 'The Heathens' find out that he's actually an undecover ATF agent what he will be is a dead man. So after a somewhat failed attempt to leave that nearly cost him his life and finding out that his brother Linc is missing he does the only logical thing he can...he heads to Shades Run the last place where his brother was known to be and in less than a day he captures the attention of 'Sweet', who's not just any Havoc member...nope, turns out he's the president of the Havoc MC and as much as he wants to stay off of any Motorcycle Club's radar finding himself on Havoc's also offers him a level of protection that like it or not he's going to need if he hopes to survive much less make progress in his search for his brother.

As Bram and Sweet work together to try and find Linc while each man tries to keep his secrets hidden both men find that they may be able to hide their secrets but they're not so good at guarding their heart.

Bram and Sweet's relationship is often times a case of come here, come here, get away, get away as both men keep trying to throw  up obstacles to why they shouldn't be together...to be fair Bram does this more often than Sweet, but Sweet manages to throw his obstacles in there as well all the time never letting them got in the way when he thinks Bram needs saving or protection.


And I have to admit that once again I found the Havoc MC to be an oxymoron all on it's own. They're bad-assed bikers who will mess you up in a heartbeat if you mess with them or break their code and all while helping you if you're in trouble and they feel your cause is just...in a sentence 'they are unlike any biker club I've ever heard of' but again it's fiction and the fun thing about that is the story can go pretty much where ever the author wants to take it. In spite of the fact that this may seem a little unlikely for me it's also reflective of the fact that in the real world things are often not always how they appear to be.

Overall I found that I enjoyed this story a bit more than 'Running Wild' however, I don't think I would have if I hadn't listened to that audio book first since a lot of the characters from 'Running Wild' play a role in this book some more so than others...such as sweet who was secondary character in 'Running Wild' but who's a main character here and while Bram is essentially new to the story Linc is a good friend to Noah and Sean (who is also known as 'Rush') and there are a some others but I'll leave them for readers to discover when they are enjoying the story.

Now about the narrator...I'm one of those people who usually like the consistency of the same narrator from story to story in a series...unless...that's right unless the MCs are different from story to story...of course having said that should a future story have Ryker and Sean as the MCs than I admit it I would be happiest having their voices reprised by Dorian Bane rather than another narrator...that's just how I roll.

Now back to this book and this narrator...Mark Larchmont is not only a new to me narrator but it would appear that he's new to the world of audio book narrating in general. 'Running Blind' is currently the only audio book he has to his credit on audible, however, when I had a peek at his site it tells me that he's currently working on another audio book for S.E. Jakes and there was a sound clip for a m/f book...that I was unable to find a title for. I found all this because I was honestly hoping that there were other books of his that I could check out. I really enjoyed this one and while I liked Dorian Bane's performance during 'Running Wild' I have to admit I think for me I enjoyed the audio on this one just a tiny bit more...hence the 3.5 stars and I'm definitely going to be looking out for more bu this narrator.

An audio  book of 'Running Blind' was graciously provided by the publisher in exchange for an honest review.