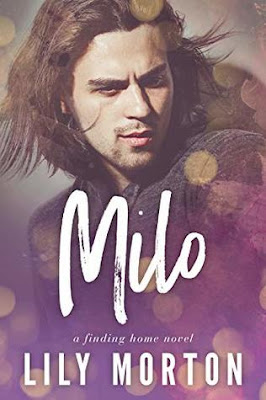 
Once upon a time a brave knight rescued a young man. Unfortunately, he then spent the next few years bossing the young man around and treating him like a child.

This is the second book in the Finding Home series, but it can be read as a standalone.

I love dual POV narratives, and both Niall and Milo are lovable MCs: Milo with his subdued sass and sarcastic remarks, and Niall, protective and commanding, but never controlling.

Milo fears that a relationship with an intense, possessive guy will make him feel small. His ex belittled and mocked him relentlessly. But Niall is nothing like Milo's nasty ex Thomas.

Niall is real and is starting to have (inconvenient but delicious) feelings for his best friend's little brother.

Why, why, WHY did Lily Morton have to go here? I just went off on a big rant about siblings sleeping with each other's exes in a review for another book. I despise that trope, and it got really weird here.

Gideon gets jealous and goads Milo about Niall's big cock and how good Niall is in bed. Raise your hand if you think trying to compare notes on a mutual lover with your sibling is disgusting.

Supposedly, Gideon was just doing this to make Milo see that he had deeper feelings for Niall, but the whole thing was super skeevy.

Plus, random secondary characters are introduced (the hussy, her sister, the sister's husband, some random guy named Sam) for no apparent reason. All the chapters set at Niall's villa/chateau seemed random and entirely unnecessary to me.

Had it not been for the Gideon situation and all the drama surrounding it, I would have given this book 5 stars. Even if Gideon and Niall being lovers had been mentioned but not so present on page (with various references to their sexual exploits), I could have let it go. Gideon and Niall could easily have been just close platonic friends or fuck buddies in their youth, but having sex with one brother and then screwing the other brother a few weeks later is a hard NO for me.

As much as it pains me because I typically ADORE Lily Morton's work, and despite the lovely HEA/epilogue and smoldering sex, I'm going with 3.5 stars.

A well-composed book is a magic carpet on which we are wafted to a world that we cannot enter in any other way.