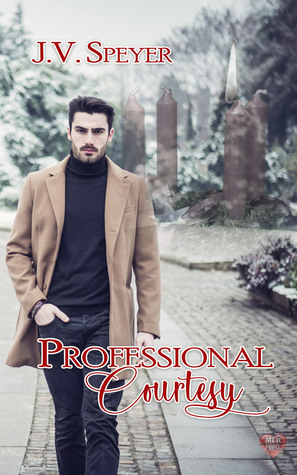 This is the story of two college professors who share an office and not much else – until the holiday season works its magic.

Eric’s semester hasn’t been going all that well. Not only have renovations to the English Department’s physical space forced him to share an office with the department’s newest faculty member, Mike Kistler, his mother showed up at the beginning of the semester with all her worldly possessions and a U-Haul. It’s not that he doesn’t care for his mother, but she’s disruptive. She keeps wanting to honor traditions they never cared about when he was growing up, starting with the giant antique advent calendar she dragged over from her parents’ house in Hamburg.

Eric has a solution, though. He might not have much interest in his mom’s traditions, but his irritating office mate does. He’ll bring Kistler over, and his mom will have someone who cares, and someone to speak German with, and Eric will be left alone to grade papers in peace.

Mike is the rising star of the English Department. He’s worked damn hard to get from homeless teen to young PhD, he’s proud of his accomplishment, and he loves to give back. He likes his work. He could live without his office mate, who’s attractive but stuffier than an overfull burrito. He’s shocked when Eric invites him to help his mother celebrate Advent, but intrigued by the old traditions. And it’s been more than ten years since he’s had anything like a family to celebrate anything with, so he agrees.

Moving from a cramped office to a family setting shifts things for Eric and Mike, and they start to see each other through different eyes. Can they find love, or will old family issues keep them apart forever?

EXCERPT:
“Hey,” he said in a feather-soft voice, one calculated to not wake Suzanne. “I wanted to say thanks for last night, but you were gone. Want me to make you breakfast instead?”
Eric could see, in Mike’s eyes, exactly how he’d wanted to thank him for last night. He could see the possibilities for the future stretching out in front of them. His chest hurt as he looked away. “Actually, I think they’ve gotten the roads clear. I’d better take you home.”
Eric heard Mike’s clothes rustle as his posture changed. He stood straighter. His whole body stiffened. Eric couldn’t make himself look at Mike’s beautiful face, but he heard the unmistakable chill in his voice when he said, “I see. Okay, then, let me grab my bag.” He moved swiftly and silently into the guest room to grab his things. A few moments later, he was back, his coat and shoes at the ready.
Eric bit his lip to keep from screaming. He had to do this. If he had to do it, why did it hurt so much? He grabbed his keys and his coat, and they headed over to the garage together in silence. Comm Ave was indeed clear, so Eric pulled out and got them onto the road.
“We shouldn’t have done that,” he said, once they were on their way toward Allston. “I enjoyed it. It might have the best night of my life. But we — I — shouldn’t have done it.”
Mike pressed his lips together. He stared straight out the windshield, without looking directly at Eric. Eric couldn’t tell if he was angry or hurt. He had every right to be either. “Well, we work together. So, I guess that makes sense.” He took a deep breath.
“That’s not it.” Eric gripped the steering wheel a little tighter. “It’s just… my mom. I know she’s nice to you and all that, but she’s never accepted my sexuality. When I came out they didn’t kick me out or anything, but they did tell me ‘not in our house.’ And this is her house now.”

“Okay.” Mike considered. “And you’ve made your choice. I’m not going to try to argue with you or change your mind. But it seems to me like your mother wasn’t very subtle about leaving us alone together last night.”
Eric choked on his own breath. “She didn’t mean it like that. Oh God. Not at all. Not even a little bit. I’ve known her a long time and her brain doesn’t work like that. She doesn’t think that way.” He fought down his nausea. It might have been nice if Mike at least tried to convince him to stick around, but Eric knew it would only be to flatter his ego. Eric didn’t deserve to have his ego puffed by anyone, least of all Mike. Not today.
“She’s your mom.” Mike turned his head to look out the window. His tone was resigned. “Thanks for everything, I guess. I’ll see you when the new semester starts up.”
“You’re not coming over next week?”
“Don’t you think that’s a little much to ask?”
“Yeah.” Eric slouched in his seat. “It is. Mike, I’m sorry. I really am. I just—”
Mike held up his hand. He looked exhausted. “Don’t. Please. Just… just don’t.”
“Okay.” Eric bowed his head and kept driving.
Mike’s street still hadn’t been plowed. It might not be plowed for days. Eric stopped the car at the end of his street and bit his lip again. “Is there someplace else I can take you, someplace you can go?”
Mike shook his head. “I’ll be fine. See you in January.” He hopped out of the car and climbed up onto the snowbank before Eric could argue. Eric couldn’t blame him. He’d want to get away as fast as he could too, if he were in the same position.
He drove home as quickly as he could. He hoped to get in before his mother got up, but she was already making breakfast by the time he walked in the door. She stared in surprise. “Eric, where did you go? I was just making breakfast for you and Michael! I’ve got bacon, and pancakes, and I’ve started the coffee. How late does he usually sleep?”
“I have no idea.” Eric hung his coat up. “He didn’t sleep very late today. I just dropped him off at home. He had papers he needed to correct. You know how it is.” His voice shocked him with its raspiness.
She stared at him for a moment. “I’m surprised he made you go out in all this. He seems like such a nice young man.”
“Oh, he didn’t ask me to. I noticed how nervous he was and I offered.” Eric squirmed. He hated lying to his mother. “It’s his first job as a professor, you know? He doesn’t want to feel like he’s slacking. I wasn’t much different.”
“I suppose.” She gave him a long, measuring look, and then she shrugged. “Well, this is a lot of bacon. I suppose we can use it in sandwiches, or quiches.”
Eric tried to choke down the breakfast his mother has gone to so much trouble for, but he couldn’t make much headway. When he’d done what he could, he excused himself and retreated to his room. There, he could indulge himself in a good cry.
He’d done the right thing. He knew he had. He just wished doing the right thing didn’t hurt so much.