I’m trying to remember where the idea for Unfamiliar Waters came from because it’s a very different premise for me.  Each year Dominic and I take a Caribbean cruise in order to ward off some of winter’s chill for a week or so and from the ship, we sometimes see islands in the distance.  And of course my writers mind takes off.  In the Bahamas as well as other places, there are whole or nearly whole islands that are privately owned and my mind started to imagine what life would be like if you were raised away from civilization on a private island paradise.   What would that be like and how would the intrusion of someone with a skeptical mind and suspicion change that dynamic?   At that moment Unfamiliar Waters was born.  But in the case of the story, the island is a paradise and the perfect place to fall in love. But not everything is as it appears and below the surface there are forces much darker than the Caribbean sun at work and with the intrusion of the outside world, those forces decide now is the time to act. 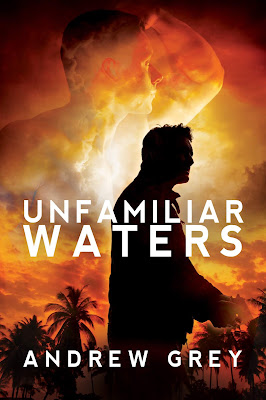 With the pressures of the job bearing down on him, police officer Garrett Wreckley needs a vacation—in fact, he isn’t given a choice in the matter. Since the water has always soothed Garrett’s soul, he heads to the Caribbean, hoping some time alone sailing on the open water will help him pull himself together. But even though he’s taking a break from law enforcement, Garrett can’t get rid of his cop’s instinct so easily.

He meets Nigel, a young man as innocent as he is beautiful, who grew up sheltered from the world, exploring the beaches and tropical forests with only the company of his aunt, his brother, and the wildlife and sea creatures he befriended.

As sweet, passionate love blooms, their time in paradise feels too good to be true… and Garrett’s gut and training tell him that might be the case. As he investigates, he quickly realizes everything is not as it seems. Will his snooping destroy not only their romance, but everything Nigel believes about his life?


Nigel swam back to shore, and Garrett followed. They sat once again near the stream in the shade of a coconut palm. “How long will you be here?” Nigel asked after a few minutes of silence.
“I don’t know. There’s no place I need to be.” God, it was peaceful. Tropical breezes blew through the trees, rustling the fronds, and Garrett would be happy to stay here forever. He sat up and tugged his shirt over his head before lying back down on the sand, then closed his eyes for a few minutes and just let himself be.
When he opened his eyes, he found Nigel looking at him, watching him, with naked desire in his eyes. It had been a long time since Garrett had seen that kind of unashamed longing without a hint of caution.

“You’re a very handsome man,” Nigel said softly.
“Thank you.” Warmth spread through him at the admiration and heat radiating from Nigel. Damn, it was heady being admired and ogled like that. Not that Garrett intended to do anything. The last thing he wanted was to pop the bubble of an innocent, and all indications were that Nigel was as innocent as they came. “Do you have friends here?”
“Like Sancho Panza and Don Quixote? No. There is no one here to be friends with like that.” Nigel turned away, staring out to sea. “There is just Jules and me. He is my friend and also my brother, but it’s not the same.”
“No, I suppose not,” Garrett said as a bell rang somewhere, the sound carried on the wind.
“I have to go.” Nigel jumped to his feet. “I’ll be back. Will you stay?” He was already heading toward the break in the trees that formed the path.
“Yes. I can stay for a few days,” Garrett agreed. This was as quiet a place as any, and the view was spectacular.
“Okay. I will be back later.” Nigel waved and disappeared down the path.
Garrett watched him go, blinking a few times. With Nigel gone, the only indication he’d been there at all were his footprints in the sand, and many of those were already disappearing in the tide. This whole encounter could have been part of his imagination if it wasn’t for the lingering heat that stayed behind, and the small pile of shells near the edge of the beach that Nigel had been gathering when he’d first arrived.