Trigger warning: While this post discusses a sweet hurt/comfort novel, it also touches on sexual trauma. If you find this topic disturbing, I would advise caution in reading it.

Illumined Shadows was a difficult story to write, for many reasons. I restarted it from scratch so many times that I have a 375,000-word file containing all the discarded scenes. That's almost four novels' worth of words that didn't work. Ouch.

The biggest problem was that I was trying to do too much with the story, which always meant Colby's healing process had to come off way too fast in order to fit it all in. Having survived my own sexual trauma, I knew this wasn't going to work. You don't recover overnight from something like that.

I recently read a book in which a young man goes from traumatized sexual captive to engaging in sexual D/s play with his rescuers in just TWO DAYS. I nearly threw the book across the room. It was so horribly unrealistic.

Yet that was where my own book was going, so I knew I had to pull the scope way back, stretching out the process of Colby's recovery into something that was far more reasonable.

Granted, each person is unique. We all handle our problems and our traumas in different ways and at different paces. I've heard of sexual assault survivors able to move on and become sexually active again within a matter of months, while others never get there. For me, it was almost four years before I became sexually active again, but I didn't like it. I wasn't truly ready. Another two years after that, it was a little easier.

For my own sake and for all the survivors out there—men, women, and children—who have had to endure that kind of violation, I wanted to do Colby's story justice. I wanted it believable. Especially since he's one of those precious characters that I dote upon (I'm sure all authors have at least one like that). The kind of character you just want to tuck into your pocket and carry around with you to keep him safe and warm.


It's no wonder Vic calls Colby his sweet boy, because he's mine, too. 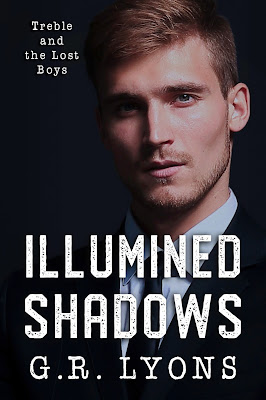 
When Victor Lucius was sixteen years old, a few cruel words out of his mouth led to a brutal tragedy, one that Vic has been trying to make up for ever since. Now, working as a missing persons expert, Vic tracks down and rescues people from abandonment or abuse, trying to alleviate the guilt constantly weighing him down.

His latest case—a boy who was kidnapped at the age of two and then held captive for nineteen years—is by far the darkest of his career. If there's any chance of Vic finally redeeming himself, helping this boy might be it.

But rescuing Colby from his basement prison is only the beginning, and brings a whole new struggle to Vic's life:


Treble and The Lost Boys Series

While daylighting as office manager for the family auto repair business, G.R. Lyons can often be found working on one of multiple manuscripts or desperately trying to keep up with the TBR pile.