Thank you so much for helping me celebrate the release of Devouring Flame! At the end of the tour, I’ll be giving away a prize—a $25 Dreamspinner gift card plus one of my backlist titles—to one commenter (chosen at random across all the tour posts), so please be sure to join the conversation!
Devouring Flame is the second book in my series centered around the employees of Enchanted Occasions Event Planning, where the word “enchanted” is quite literally, er, literal. The EO staff are all outcast from their supernatural home realms, most of them because they’re aitchers (short for half-and-half), part human and part other, and discriminated against by Pures of all races. But they’ve found a community with their EO co-workers, and job satisfaction staging magical events for their clients.


Of course, sometimes those events get… complicated. :-) 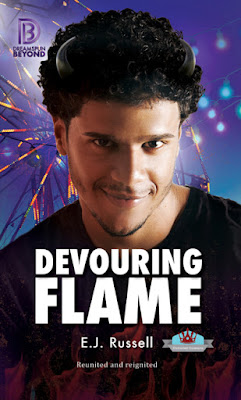 While cutting through the Interstices—the post-creation gap between realms—Smith, half-demon tech specialist for Enchanted Occasions Event Planning, spies the person he yearns for daily but dreads seeing again: the ifrit, Hashim of the Windrider clan.

On their one literally smoldering night together, Smith, stupidly besotted, revealed his true name—a demon’s greatest vulnerability. When Hashim didn’t return the favor, then split the next morning with no word? Message received, loud and clear: Thanks but no, thanks.

Although Hashim had burned to return Smith’s trust, it was impossible. The wizard who conjured him holds his true name in secret, and unless Hashim discovers it, he’ll never be free.

When their attraction sparks once more, the two unite to search for Hashim’s hidden name—which would be a hell of a lot easier if they didn’t have to contend with a convention full of food-crazed vampires on the one day out of the century they can consume something other than blood.

But if they fail, Hashim will be doomed to eternal slavery, and their reignited love will collapse in the ashes.

Luckily Smith is the guy who gets shit done. And Hashim is never afraid to heat things up.


“Hashim!” Ringmaster’s roar shook the windows and made Smith grind his molars. “What are you doing?”
Hashim flinched—as did the rest of the diners, and who could blame them? Way to promote a pleasant dining experience, asshole. Get much repeat business?
Lucifer’s balls, Smith never wanted to see that look on Hashim’s face again—bleak, that’s what it was. Hashim had screwed him over, but nobody deserved to be bullied like that. If that Ringmaster poser behaved like this in public, what would he do in private?
Part of him wondered why Hashim would put up with it, but regardless, Smith was now totally on board with Brooke’s plan to stick it to Ringmaster. In fact, he planned to go one better and teach the guy a lesson.
Although how he’d manage that—him, a defective demon aitcher working for an event-planning company—he had no idea. What could he do—cater the guy to death? Come to think of it, Chef could probably figure out a way to do that. Smith, though, had to depend on his tech kung fu and the demon ruthlessness that his mother always swore he had inside him somewhere.
Turns out I do. I just needed the right target.
Ringmaster stomped over to their table, obviously about to lay into Hashim again. Brooke’s eyes were as big as Smith’s fists. She gave a tiny shake of her head, so apparently he must be doing that smoldering intensity thing—or maybe just looking demon-edgy. Okay. No decapitating the owner of the venue. Damn it.
But he had to defuse the issue somehow, cut the bully off at the knees.

The kebab was still burning merrily so Smith plucked the skewer out of Hashim’s hand. Using his extended claws, Smith teased one of the flaming chunks of meat off the skewer and popped it—still on fire—into his mouth. Ahhhh. He closed his eyes in bliss. He’d convinced Chef to prepare well-done meat, but he’d never talked him into serving it when it was still on fire. This was fucking amazing.
He chewed and swallowed, the fire tingling in his mouth, singing in his blood. He opened his eyes to find Hashim staring at him, wide-eyed, with Ringmaster looming behind him like a red-coated refrigerator. “Perfect. Thank you, Hashim. It’s so rare to find a waiter who’s able to deliver my food exactly as I like.” He kept his expression bland as he nodded at Ringmaster. “My compliments. Your staff provides exemplary customer service.”
“Yes,” Brooke chirped. “I’m sure our clients will be ecstatic.”
Chill, Brooke. Don’t oversell it. This guy isn’t that stupid.
Ringmaster’s eyebrows bunched over his snout. He looked almost disappointed that Smith and Brooke weren’t angry, as if he wanted an excuse to rake Hashim over the coals. Take that, you douche canoe. “Well. I’m pleased that you weren’t inconvenienced by this one.” He flicked his claws at Hashim. “You may go.”
Hashim inclined his head in a brief bow and Smith’s anger boiled up again at the sign of subservience. He popped another hunk of beef into his mouth, although it wasn’t as satisfying since the flames were dying down.
He listened to Brooke’s discussion with Ringmaster with one ear, finishing his snack while keeping one eye on Hashim, who moved among the other occupied tables with noticeably tense shoulders and a false smile.
I’ve seen his real smile, and it looks nothing like that.
Finally Brooke finished her conversation and stood. “Thank you for your time. Our housekeeping staff will arrive promptly at five to begin the strictly janitorial tasks. I’ll let them know to avoid the upgrade crews.”
Ringmaster frowned at the table, which only contained the water pitcher, Brooke’s empty glass, and Smith’s bare skewer. “I thought you were going to eat lunch.”
“We did.” She smiled brilliantly. “Thank you. We’ll be going now.”
She jerked her head at Smith, and when he stood, she grabbed his elbow and towed him out of the café, not saying anything until they were off the grounds and nearing the Interstitial gate. “Neptune’s balls, Smith, I can’t believe it.”
He tried to pry her fingers off his arm—with no success. “Yeah. That Ringmaster guy was a total asshole.”
“Not him!” She finally let go, and Smith rubbed his elbow, still smarting from her nails. “You slept with Hashim!”
He rocked back on his heels. “I—What makes you think that?”
“Oh please.” She pivoted and marched toward the gate. “Don’t insult my intelligence. I know a lover’s quarrel when I see one.”
“Whatever you thought you saw, it had nothing to do with love.” Hashim had made sure of that. Although to be fair, he’d never promised Smith anything. They hadn’t done all that much talking, anyway.

E.J.’s paranormal romantic comedy, The Druid Next Door, was a 2018 RITA® finalist. She’s married to Curmudgeonly Husband, a man who cares even less about sports than she does. Luckily, C.H. also loves to cook, or all three of their children (Lovely Daughter and Darling Sons A and B) would have survived on nothing but Cheerios, beef jerky, and Satsuma mandarins (the extent of E.J.’s culinary skill set).