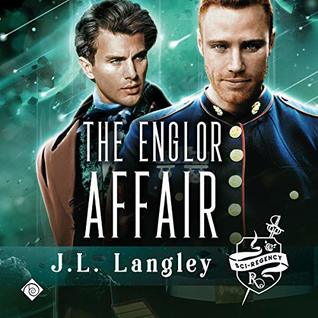 
In hiding who he was, Payton found himself...and the man he would grow to love.

After his brother is kidnapped, Prince Payton Townsend masquerades as an Admiral’s assistant in order to track the culprits through the tangled mysteries of the planet Englor. He finds way more than he bargained for in the form of Marine Colonel Simon Hollister.

Simon is no ordinary soldier. He’s heir to Englor and his life is mapped out for him: throne, bride, and eventually an heir. He never expected a dalliance with Payton to blossom into love, or that the organization that taught him to lead would threaten that love—and their lives.

Danger and intrigue abound as they learn more about their shared enemy, and about each other. What they learn could help them rise above to an enduring love—or pull them apart.

It's been a really, really long time since I've read this series. J.L. Langley was an early days author for me when it comes to m/m and I strongly remember how much I enjoyed these stories.

Sci-fi is another one of those genres that I rarely venture into. So while I'll be the first to admit I'm not expert in the world of sci-fi I am an pretty knowledgeable about what I like and I liked this series...probably even more on audio than I did the e-books.

We first met Prince Payton Townsend in 'My Fair Captain' the first book in this Sci-Regency series, he's the brother of Aiden one of the MCs in that story and in this book we see him traveling to the earth colony of Englor with his brother Aiden's husband, Nate Hawkins. It's on the planet Englor that Payton meets Colonel Simon Hollister and all this would have been simpler if Simon wasn't more than just an ordinary colonel...nope, Simon's the heir to the throne of Englor. But of course life is never simple for the royal family.

This one's got spies, intrigue, espionage, undercover escapades and ultimately a wedding to protect someone's honor...and oh how I loved this but I'm not telling the details about the who's and whys of it because for me this was just all too precious.

The Englor Affair is a thoroughly fun and enjoyable romp through a regency world of an entirely different creation. On the planet Regency being gay is not only accepted, it's preferred, but on the planet Englor it's a different story...being gay is only beginning to be accepted. Simon may be a prince but he's a prince with a homophobic biotch of a mother, a father who needs a bit more spine and his whole world is about to get upended when he suddenly finds that he's not the heir to the throne...he's inherited it.

'The Englor Affair' is a sexy, entertaining and enjoyable story narrated by Joseph Morton and as much as I enjoyed reading these stories more than a couple of years ago, enjoying the story on audio narrated by this new to me narrator has definitely added a whole new level of listening pleasure to it...one that I know I'll be revisiting again soon.

This is my second audio book narrated by Joseph Morton so while he's fairly new to me after having enjoyed his narrations for the first two books of this series this narrator has impressed me both times with a very solid and enjoyable audio experience.

While this may not be classic literature or even classic 'sci-fi' it is an enjoyable and fun read/listen with some humorous and fun moments that leaves the listener (meaning me) smiling and adding it to my mental 'I'll be listening to this again' list.

An audio book of 'The Englor Affair' was graciously provided by the publisher in exchange for an honest review.