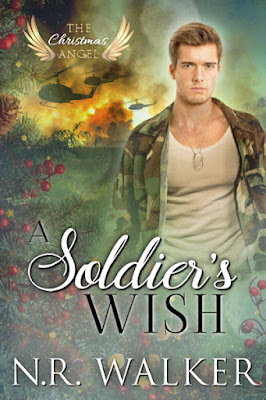 Richard Ronsman is a sheltered farm boy who lives in the shadow of his overbearing father. He’s hidden his darkest secret to earn his father’s love, but nothing is ever good enough—not even volunteering for the Vietnam War. And with just a few days left before he’s deployed, he’s invited by a striking hippie to join him at a music festival.

This story is one of seven stories which can all be read and enjoyed in any order.

Told in three distinct sections from a dual first-person POV, A Soldier’s Wish spans almost eight years and takes us from Woodstock to Vietnam to San Francisco. The mood of the story shifts from joyous exploration to fear and longing to quiet contentment.

Heavy on the hurt/comfort, this book is angsty but not so angsty that it leaves you feeling hopeless. The ending is a HEA, or as much of a HEA as two men in love could have in 1977.

The events of this story transpired before I was born, so I in no way claim to be an expert on this era. I wasn’t there. I didn’t live it. That being said, the setting and dialogue didn’t feel entirely authentic to me. The way Woodstock was described and the words the MCs used seemed like a cliché. I’m not saying Walker didn’t do her research, because she always does, just that I didn’t get a true Vietnam era vibe.

Setting that quibble aside, I still very much enjoyed this love story between a farm boy turned reluctant soldier and technology student who’s a hippie at heart. Gary invites Richard to come to Woodstock with him and his friends after seeing Richard staring forlornly out a café window. Richard, who’s never done a spontaneous thing in his life, throws caution to the wind and accepts the invitation.

Their time at Woodstock is magical. Being with a man, loving a man, is more than Richard had ever hoped for. Essentially pushed to join the military by his religious parents, Richard is desolate and uncertain. Being with kind, carefree Gary makes him feel whole. The three days they have together pass far too quickly, but the men keep their promise to stay in touch as Richard ships out to Vietnam.


Richard and Gary’s relationship is heartfelt and true. Even though Richard returns from the war a broken man, physically and emotionally, Gary never gives up, and Richard doesn’t want him to. Thank god there was no unnecessary drama with Richard pushing Gary away; the long separation was difficult enough.

The angel of the series title isn’t as prominent here as it was in the other books I’ve read. Richard finds the angel (or, rather, the angel finds him) in the last third of the book, and she becomes a symbol of good fortune for the men. Gary and Richard make wishes during the first Christmas they spend together, and both believe the angel had a hand in their wishes coming true.


“I did wish for something.”

“It already has … It was about you. And forever.”

This review wouldn’t be complete without a shout-out to Kat, a smart, free-spirited woman and a wonderful friend who’s entirely supportive of the men’s relationship and facilitates their reunion.

Kat reminded me of my mom, who was a hippie in her day and played beard to a dear friend (also named Richard) so he could be with his boyfriend. This was in the late-60s in a communist country where engaging in or aiding and abetting a homosexual act carried a severe penalty. Some people, like Kat, like my mom, are always tolerant and brave, despite strict societal rules.

Maybe they are the true angels after all.

She is many things; a mother, a wife, a sister, a writer. She has pretty, pretty boys who she gives them life with words.

She likes it when they do dirty, dirty things...but likes it even more when they fall in love. She used to think having people in her head talking to her was weird, until one day she happened across other writers who told her it was normal.

She’s been writing ever since...