(Christmas With the Yared Sheikhs, #1) 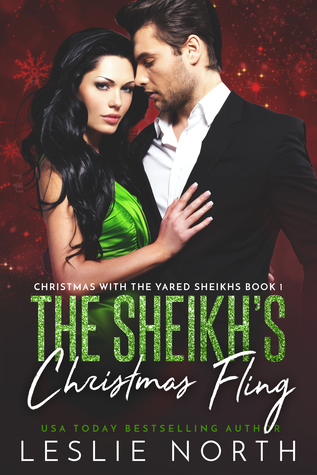 It’s the Christmas season in the tiny Kingdom of Maatkare, and the royal family needs a chef. Desperate to prove herself after her first restaurant failed, Ana Rizzo jumps at this chance for redemption and nabs the high-paying, short-term job.

The opportunity couldn’t be more perfect. Ana will be able to stretch her culinary skills, earn enough money to open another restaurant, and still be able to give her adopted daughter the attention she needs.

Her biggest challenge will be winning over the family’s elderly cook and getting Noel Yared, the middle son, to give her food his stamp of approval. She only cares about Noel’s palate, not his soulful brown eyes, his gorgeous runner’s body, and his amazing kisses. An avid runner herself, Ana pushes herself to keep up with Noel during their daily runs. But she’s finding the biggest challenge is resisting Noel’s charm.

Noel finds Ana endlessly fascinating and incredibly sexy. With a bit of charming persuasion from him, the two begin what they both know is a short-term affair. No rules, no heartache, just great sex and a bit of fun. So when he believes Ana has betrayed his family’s trust, he’s glad his heart wasn’t involved. Glad she’s gone. Glad he’ll never see her again.

Until he realizes a couple terrible truths too late: Ana was actually the one who was betrayed, and somehow he’s fallen hard for her. Now he needs a bit of Christmas magic to prove he’s worthy of her love.


Christmas traditions are a big part of my Christmas with the Yared Sheikhs series...and it involved a lot of research!

Not many Middle Eastern countries are Christian, but one tiny kingdom near Ethiopia has strong ties to Christianity, just as Ethiopia does, Maatkare—and it has strong Christmas traditions. One is that the days leading up to Christmas and those leading to Twelfth Night must be celebrated with love and laughter—and the Sheikhs of this country are serious about that tradition.


This year, the wife of the ruling Sheikh is in Switzerland to deal with chronic illness that has literally been sapping her life. The sheikh's sisters have also gone to Switzerland for support, and the only other royal women who used to make sure all traditions were upheld—decorations, food, and parties—have either left the country as brides to other countries, or old Grandma Zehra says she is too old.

The truth of the matter is she loves her fictional persona, Leslie North, more than her normal, day-to-day persona! Her bestselling books focus on strong characters and particularly women who aren’t afraid to challenge an alpha male. Inspired after years of travel, her stories are set all over the world, from the tough streets of Russia to the beautiful beaches of the middle east.

Leslie fell in love with romance when she first picked up a scrappy, dog-eared romance book from her local library. She began writing soon after and the rest, as they say, was history. She now lives in a cozy cottage on the British coast and enjoys taking long walks with her two Dalmatians, George and Fergie.

She LOVES reader feedback, and if you have any comments, don’t hesitate to contact her via e-mail: leslie@leslienorthbooks.com.