Audio Book Review: A Wish Upon the Stars by T.J. Klune 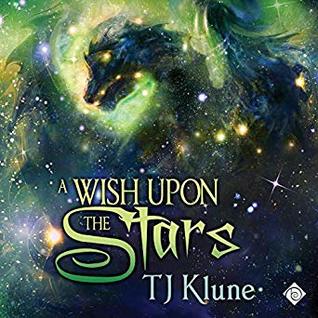 
Nearly a year ago, blinded by grief and betrayal, Sam of Wilds made a desperate decision to follow the Great White into the Dark Woods. Now, he emerges to a world changed.

The City of Lockes is a prison. The King has been locked away in the dungeons. The Kingdom of Verania has fallen, and the Dark wizard Myrin sits on the throne.

But soon after his return, Sam learns of a resistance fighting in his name led by a courageous knight, a defiant prince, a pissed-off unicorn, and a half-giant who wants to smash everything in sight. If he has any hope of defeating the villains who have taken their home, Sam must face the consequences of his choices—and the friends he left behind.

If you like dragons...how could you possibly not love this book...

I've actually been letting this one simmer in my mind for a couple of days now because... words...I was really hoping to find the words to explain how freakin' much I loved this book...this whole damned series.

I can honestly say this is one of the most unique and enjoyable series that I've ever read. Up until this final book I've both read and listened to the audio for all of the books in this series but time being what it is sometimes I had to make  choice and I decided that as much as I enjoy reading the books Michael Lesley's narration of these books has been such a treat and simply so delightful that I decided I was going to wait until he could read this last story to me and just let it all be a surprise and I'm so glad I did  this.

I think I've likened these stories to fairy tales before with their kings, princes, magicians, dragons, unicorns and other mystical creatures...but, I will also say this is not a fairy tale for the children or at least not until they're of age, ok?

One of the things I've loved the most about this series is that none of these stories are short which I know may seen like a strange thing, but what that's meant for me is that the author has taken the time to create the magic that's only ever found in a story that takes the time to paint a picture that draws the reader in allowing them to forget that their world isn't the one contained within the pages of that story. Allowing them to see everything in their mind's eye. To imagine what being somewhere maybe even someone else is like...just for a little while...to escape and that's not a bad thing for me it's just another way to exercise my imagination to use the words given to me by an author and see if I can create the world they're trying to show me.

As for the audio series one of my favorite things has been Michael Lesley and the amazing job that he's did with the narration and simply the fact that each one of these stories has been narrated by the same talented narrator...when it comes to listening to a series on audio, especially one that contains the same main characters from story to story, and having the continuity of the same narrator providing the same voice for those characters from story to story is nothing short of AMAZING!

'Tales From Verania' has been a wonderful adventure to go on with Sam and Knight Delicious Face (otherwise knows as Ryan Foxhart), Prince Justin, Gary, Tiggy, Kevin and all the other dragons!!! But with 'A Wish Upon the Stars' the final confrontation between out rag tag collection of heroes and the villains who have dogged their heels is looming and the question will no longer be if, but when will it happen.

I'm not going to talk about the actual story here because one...I refuse to spoil the epic awesomeness of this for anyone and I think the best explanation that anyone could give for this series is to simply say...Read it! Listen to the audio!!! Make it a part of your life!!! Because it's epic and awesome!!!  and yes, I might be borrowing from another story by this author...but that's only because it's whispering in my ears right now...but we'll talk about that another time, ok?

For now it's all about the epic awesomeness of Verania and it's colorful characters...seriously, it's a great place to visit and one I highly recommend... especially on audio, it's the chance to revisit the magic of childhood and fairy tales in the world of adulthood.

An audio book of 'A Wish Upon the Stars' was graciously provided by the publisher in exchange for an honest review.