ARC Review: Exit Through the Gift Shop by Kim Fielding 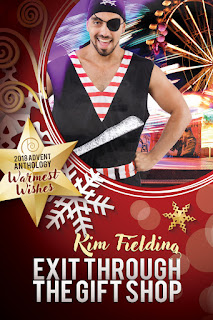 
Alex’s traditional family Christmas Compromise means spending the holiday at a second-rate theme park, Poseidon’s Planet, but Alex doesn’t mind. He enjoys the rides and the company of his family, and it’s a good break from his going-nowhere existence back in Indiana. Then he meets a certain sexy employee in a pirate costume, and Alex’s vacation gets even better. But thrill rides last only a short time, and sooner or later everyone has to return to real life. Alex long ago gave up on marrying a handsome prince—will he have to give up on his pirate as well?

I liked this story quite a bit. It's cute and sweet and celebrates an entirely secular version of Christmas spent at an amusement park where Alex, who's there for an annual family vacation, meets the glorious pirate Rory. Rory and Alex click immediately.

The story takes place over a couple days, and even though there's no steam, save for a few lingering kisses, and no epilogue, I bought Alex and Rory's HFN hook, line, and sinker.

After reading a few stories by inexperienced authors, I really appreciated Fielding's flair for language and dialogue.

I liked Alex's crazy but totally normal family and Rory's out-of-the-blue proposal. This is a short story, but I finished feeling happy and satisfied. And that's good enough.