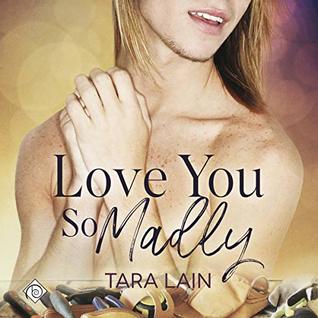 
A Love You So story.

Ben Shane has it all...and he'd like to give some of it back. While he loves his job heading a foundation that funds worthy causes around the world, his engagement to one of America's wealthiest men leaves him feeling more like a trophy wife than a valued partner. The first warning that his relationship might not be designed to last is his irresistible lust for Dusty Kincaid, the golden-haired, bright-eyed handyman for his company.

Though Dusty is odd for a 23-year-old - no liquor, no sugar, and he can't even drive - the more Ben gets to know Dusty, the more he admires him. But is Ben going to give up a guy who drives a Ferrari for one who takes the bus?

He must be mad. Dusty knows he and Ben can never work. After all, Ben's perfect...and Dusty isn't. But Ben might surprise everyone with proof that he's only mad in love.

"Love You Madly' is the second book in Tara Lain's 'Love You So' series and while I enjoyed the first one and liked that the MCs from that story made a bit of an appearance in this story but their role was't such that you'd need to read it before reading this one but it is a sweet story that makes for a light, pleasant read, however, I definitely enjoyed this one more and really it's not about one being better than the other...it's really just a case of this one appealed to me and I connected with it more.

Ben Shane has it all...not because he was born to wealth and privilege...which he wasn't nor was he born to poverty. Ben's parents have worked hard to have a comfortable life and in the process given Ben role model's that he wants to emulate. He's grown up in a home with parents who love him and each other, who have worked hard to earn the successes they've had and always wanted better and more for him so when he becomes engaged to Alan whose family are regulars on the society pages. On the surface it's everything that Ben's parents have ever wanted for him.

At 23 years old Dusty seems a bit unusual to the rest of the world...he doesn't drink or drive and he's way more diet conscious than the average 23 year old. Dusty also the sweetest young man you could imagine meeting but trust me this in no way makes him a pushover...oh no there's so much more to this young man than meets the eye. To say that I like Dusty is a bit of an understatement.  Dusty is a young man who in spite of the challenges that he's faced in his life has turned into a kind, sweet,  young man but also someone who can be strong and confident when needed.


Ben and Dusty made for an adorable couple and I loved that neither of them was trying to change they other but just wanted to spend time with and get to know each other for who they were.

My biggest issue and the problem that took away from this story for me was the length of time that Ben's ex was involved in the story because seriously this dude was annoying as nails on a chalkboard and I have to say that Ry Forest who was the narrator for this audio book captured not only 'Alan's annoying personality perfectly...nails on a chalkboard perfectly along with some of the other characters like Ben and Dusty but also the lovely Anastasia who was definitely a larger than life character and who without fail made me smile...I wasn't really fond of her laugh but that's life right, I mean really do any of us always like the sound of someone's laugh? No, I think not. I can honestly think of a couple of people I know who's laugh is worse  than Anastasia's so it is what it is.

'Love You so Madly' is my third time around listening to this narrator and so far definitely so good. I'm looking forward to future stories narrated by Ry Forest. I've enjoyed his narrations and while he hits all the basic check marks on my list of 'what I want in an audio narrator' I also find that as a narrator he imparts a feeling for depth to the characters making an enjoyable story even better.

An audio book of 'Love You so Madly' was graciously provided by the publisher in exchange for an honest review.