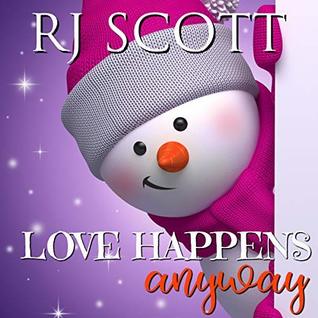 
Hiring a boyfriend for Christmas; what can go wrong?

Luke is twenty-thousand dollars short for the renovations on Halligans; his family’s bar in New York’s Financial District. A favor for a buddy has him agreeing to play the part of boyfriend to a guy with more money than sense.
But when the spirit of Christmas works its magic on the two men, and they begin to fall for each other, Derek runs scared, and Luke needs space.

I first read this story last year and found it to be a delightful holiday story about pretend boyfriends who fall in love. I was going to attempt write an entirely new review for this one but when I revisited my original review I found that much of what is there still very accurately reflects my thoughts about this sweet story so I'm just going to borrow some of what I wrote before and add my thoughts on the audio component of this story...

Derek feels like his life is spinning out of control. He’s feeling like the job he has is neither the job he was supposed to get or the one he wanted, he’s at odds with his parents and feels like they’re constantly trying to marry him off. If he could just catch a break, put a little distance between him and the rest of the world.

Derek finds his buffer in the form of Luke…a former fireman who’s in need of twenty thousand dollars to finish paying or the renovations to on Halligans, his family’s bar in NY’s Financial District. So, when Luke’s friend asks him for a favor…a favor that will bring in Luke’s much needed money. Luke finds himself reluctantly agreeing to be Derek’s pretend boyfriend for the holidays…4 dates that’s all he needs to get through and then he’ll have the money he needs…what could possibly go wrong with just 4 dates?

What neither Derek or Luke is prepared for is that things would go right…so much righter than either man is prepared for as they find that not only is there a definite attraction between them but as they get to know each other they’re also finding that they like each other.


I admit I was fairly certain that I was going to enjoy this one before I even opened the book…the author’s R.J. Scott and for me that pretty well makes it a done deal. For me Luke was the perfect person for Derek. He saw past Derek’s exterior with his pretense of confidence in an effort to cover his insecurities. Luke saw a talented man that he knew he could both like and respect. For Derek, Luke was his dream man come to life.

One of the things about this story that really capture my attention was the relationship dynamics between Derek and his parents. So often in stories the relationship between adult children and their parents are portrayed as either being good or not good but for Derek and his parents that’s not the case. Derek loves his parents and they love him and are supportive of him, but Derek doesn’t see it this way and that’s largely due to a communication issue or more accurately a case of miscommunication. Which for Derek is a more common event in his life than it needs to be because of the defensive barrier he’s built around himself.

Luke’s efforts to get past Derek and his façade of confidence has a trickle-down effect on Derek’s life allowing him to re-evaluate his interactions not just with Luke but a lot of the other people in his life…colleagues, friends and his parents.
For me the fake-boyfriend to boyfriend premise of this story was well done. It was sweet, and not only did we get to see the relationship develop between these two, but we got to find out a bit more about each of them, their past, their present and what they wanted for their future.

Sean Crisden was the narrator for this story, so along with revisiting a story I liked by an author I really like. I get to listen to one of my favorite narrators read said story. Sean Crisden is one of those narrators whose voice has this laid back tone to it that just draws me into a story allowing me to relax and just enjoy what I'm listening to. For me the whole choice of what audio narrators a person likes is such a personal and subjective issue because it's not just a matter of the narrator it's also about the right narrator for the right book and when it came to this book, I'm not saying that another narrator couldn't have also done a good job but I am saying that for me...Sean Crisden did an excellent job in capturing the characters and the spirit of the holiday season contained within the pages of this story.

An audio book of 'Love Happens Anyway' was graciously provided by Signal Boost Promo in exchange for an honest review.