Building Forever is the first in a series of standalone novels focused on older characters who think love has passed them by. I loved writing these second chance romances, and I hope you enjoy reading about the books—especially this one because Charlie and Simon will forever be the characters who started me on this journey. 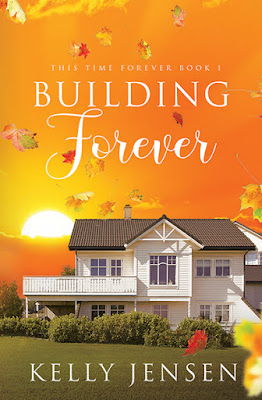 A new town, a new neighbor, and a new chance to build a forever.

Charlie King is doing fine. Sure, he’s a widower raising a teenage daughter who just got her first boyfriend, his book series isn’t writing itself, and he has a crush on his new neighbor — the guy next door. But everything’s just fine.

Simon Lynley is doing better. He moved to Bethlehem to fall out of love and rebuild his career. An affair with his neighbor isn’t part of the plan, but the attraction between them is too hard to ignore.

But when Simon’s ex follows him to Pennsylvania seeking reconciliation, and Charlie’s life starts to feel like a video on repeat, everything comes apart. Charlie worries that he’s failing as a father, and Simon is a distraction he can’t afford. Meanwhile Simon doesn’t know if he could survive being left again, and he hasn’t come all this way to make the same mistakes. But despite their fears, it’s only together that they’ll find the strength to slay old foes and build the forever they’ve been waiting for.

In this excerpt, Simon is being introduced to more than the town of Bethlehem. He’s also getting a good dose of nerd. After being gifted with a ceramic beholder that he has absolutely no idea what to do with, he follows Charlie to a bookshop where they look at Charlie’s books. Simon then proceeds to demonstrate just how out of the nerd loop he is, and Charlie, of course, thinks he’s precious.

I’m Gonna Keep You
Simon and Charlie left the stall and the next hour passed in a haze of names and faces spread across Simon’s temporal lobe like a game of Memory. One he was doomed to fail. With time, he’d make a few matches. He looked forward to the day when Bethlehem felt less like a trip to the other side of the world and more like home. Somewhere he belonged. He’d never have Charlie’s ease—the guy knew everyone—but quite liked the idea of eventually slotting into the community.
They ended their tour of the festival outside the Moravian Book Shop.
“Want to get some coffee, or something stronger?” Charlie asked.
Simon tipped his head toward the display in the shop’s front window. “Is your book in there?”
Charlie gripped the back of his neck in what had become a familiar and somewhat endearing gesture. “Books. Yeah. They’ve got the whole series.”
He had a series? “Let’s go look.”
Charlie hesitated only a second before recovering his sunny aspect and pulling open the door. “We’ll turn left when we get inside. That’s where the sci-fi is.”
To the left, a wall of bright and vivid covers vied for attention: Dragons and swords and spaceships and moons. An anxious knot formed in Simon’s gut. This was not his world. Art, he understood, and music was his passion. His love of architecture and sculpture went without saying. This imagining of other worlds was something else.
Though, he had to admit some of the covers spoke to him. There was art here.
He scanned the shelves until he caught sight of a book called Ride the Wind by C.R. King. A vortex-like thing twisted across the cover, in shades of blue and purple, with the silhouette of a small ship plunging through the middle. Four other books were shelved next to it, their spines all black with similar lettering and the same name. C.R. King.
Vaguely wondering about the R, Simon picked up Ride the Wind and turned it over to read the cover copy. Kaze Rider, wormhole travel, lost worlds, and an ancient evil.
Okay.
“What does the R stand for?” he asked.
Next to him, Charlie stopped fidgeting. “Not what I thought you were going to say.”
“Is it a rude question?”
“No, not at all. I get asked that in interviews all the time. It’s for Rothesay, which is my actual middle name. My mother had a crush on Prince Charles.”
“Oh my God.”
“I know.”
“You don’t have his ears.”
“And if that’s all I have to be thankful for in this life, I’ll take it.”
Simon chuckled. “So what did you expect me to say?”

“I figured you’d ask what the book was about.”
“I read the back. Wormholes, secret planets, and something evil. It sounds—”
“Weird.”
“Different.” And now he’d have to buy the book and read it—not that he’d planned to do otherwise. He could do weird. Hell, he was the proud owner of a beholder.
“So, you’ve seen the book. Time for coffee?” Charlie asked. “There’s a café next door.”
“Sure, let me just pay for this.”
“Oh, you don’t have—”
“Are there beholders in it? Like, is this book going to tell me what I have in this bag?”
Charlie froze in place for a second, and then he laughed. Hard. Almost-doubling-over, hiccupping type of laughter. The entire store turned to look at them. Charlie slapped his thigh, drawing attention again to one of his long, lean legs, and straightened, hands pressed to his gut. “Oh God.”
Simon responded with a feeble smile.
“You’re . . .” Charlie patted him on the arm, grinning, chuckling. “That is the absolute best. Yep. I think I’m gonna keep you.”
Simon fought the blush for as long as he could by concentrating on the clench in his gut. It was hunger. Or a need for coffee. Not a reaction to Charlie’s open face, wide smile, and warm hand on his arm.
“I’ve embarrassed you. God, I’m so sorry.” Charlie kept patting his arm, still chuckling.
Simon tried smiling more naturally. “No, not really.”
“I have. Sorry. C’mon, let’s get that coffee and I’ll tell you all about Dungeons & Dragons.”
Charlie could have told him there was a dragon living beneath the bookshop. All Simon heard was: “I’m gonna keep you.”
His gut flipped again.
If only . . .

About the This Time Forever Series
Small towns and second chances.
Simon, Frank, and Brian think love has passed them by. Each is facing down his fiftieth birthday—Simon in a few years, Frank next year, and Brian soon enough. Each has loved and lost. But for these men, everything old really is new again, and it’s only when they return to their roots that they’ll find their second chances and the happily ever after they’ve been waiting their whole lives for.
This time it’s forever.
This series includes:

To celebrate the release of Building Forever one lucky person will win a $25 Riptide Publishing gift card and a swag pack of stickers, art cards, and bookmarks! Leave a comment with your contact info to enter the contest. Entries close at midnight, Eastern time, on October 20, 2018. Contest is NOT restricted to U.S. entries. Thanks for following along, and don’t forget to leave your contact info!