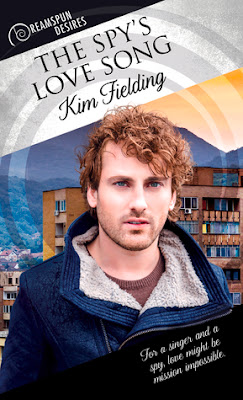 
Jaxon Powers has what most only dream of: fame, fortune, gold records and GRAMMY awards, lavish hotel suites, and an endless parade of eager bedmates. He’s adored all over the world—even in the remote, repressive country of Vasnytsia, where the tyrannical dictator is a big fan. The State Department hopes a performance might improve American relations with a dangerous enemy. But it means Jaxon’s going in alone—with one exception.

Secret agent Reid Stanfill has a covert agenda with global ramifications. Duty means everything to him, even when it involves protecting a jaded rock star. Jaxon and Reid’s mutual attraction is dangerous under Vasnytsia’s harsh laws—and matters get even worse when they’re trapped inside the borders. Romance will have to wait, assuming they make it out alive.

A rock star and his newly appointed bodyguard find themselves in the middle of murder and mayhem.

Jaxon knows nothing about Vasnytsia until he's cajoled into performing for the country's dictator. Reid, who speaks Vasnytisian, accompanies Jaxon.

What follows is a weird, scary, heart-pounding adventure in a country completely closed off from the outside world and ruled by a greedy, power-hungry man who suppresses all free speech and resistance. Think North Korea but in Eastern Europe.

Clearly, Vasnytsia is a fictional country, but its politics and policies are all too real.

When a woman dies drinking poisoned wine meant for Reid, Reid knows their time is up. Reid begs Jaxon to play dumb and leave Vasnytsia without him, but Jaxon won't have it. He and Reid, who (surprise!) is a spy, have bonded, and Jaxon won't leave him.

Jaxon is famous and easily recognizable, but despite his reputation, he's not a spoiled celebrity. He's damn brave and kind. I loved the interactions between Jaxon and the group of rebellious Vasnytsians who try to help him and Reid escape.

The romance is not the main focus of the story, and the steam is minimal, but I still felt the connection between Reid and Jaxon. You really get to know a person when your life is on the line.

Both men are loyal and selfless. They don't want to die, but they want to help the Vasnytsian people too, so they decide to go out in a blaze of glory.

The Spy's Love Song is exciting and fresh. The ending is somewhat abrupt but still a HEA, albeit a tentative one. Kim Fielding never disappoints. She's a wonderful storyteller and a stellar writer (no editing issues in sight). Big thumbs up this book!