Spotlight: The Boys Of Summer by Tucker McCallahan

Today we shine the spotlight on Tucker McCallahan and

The Boys Of Summer 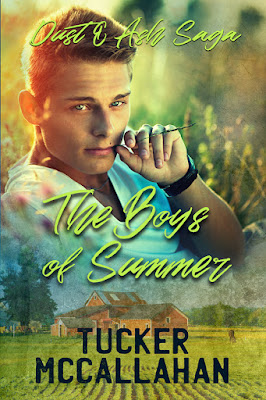 Ash Redvers, the lead singer of a family owned and operated wedding band, deals with the sudden need to replace his drummer after an unexpected accident. When Dustin Davis shows up, ready, willing, and able to play - not to mention gorgeous - Ash thinks it’s going to be the best season yet. But Ash has never had a boyfriend, and Dust isn’t willing to be a quick hook-up. As the summer heats up, they’ll have to decide whether all they can make together is music, or if there’s something more for them after the Boys of Summer are gone.

Thank you very much to Sandra for hosting this stop of my blog tour for Boys of Summer! My name is Tucker McCallahan and I’m very excited about this story and having the opportunity to share it with you. Boys of Summer is the first book in the Dust and Ash Saga, a story that has been a long time coming.

That said, I’ve included an excerpt for you to enjoy, below. Thank you for reading!

The next morning, Ash woke to an ungodly racket. The ringtone Ash chose for calls that didn’t come from his contact list, Ugly Kid Joe’s “Everything About You,” blared at maximum volume. Yawning, Ash let the call go to voicemail as he stretched and slowly dragged his body from the bed.

He’d barely finished up in the bathroom and was headed for the kitchen to see if there was any coffee in the freezer, when the phone went off again. Ash clenched his teeth and reversed direction. After striding back to his bedroom, he snatched the offensive device from his bed stand. Poking the screen to accept the call, Ash slapped the cell phone to his ear. “Hello?”

Ash worked not to grind his teeth together as he pulled clothes out of his bottom dresser drawer and closet. “That’s the trouble with gossip—it’s never accurate.”

“Steve Teague isn’t in the hospital?”


“Here’s what you need to know. You hired the Boys of Summer to play your wedding, and the Boys of Summer will be there, with a drummer, as promised.” Ash stepped into a pair of Frankie Morello shorts his best friend picked out for him several months earlier in New York City and tugged them up over his slim hips. Tucking his phone between his shoulder and his ear, Ash reached down, arranged himself, and straightened his trunks under his shorts.

“Oh, okay…. Well, great!” Valery’s sigh of relief was audible over the phone. “I’ll email the special song choices to you, then, like we discussed.”

“That’d be awesome, Valery.” Ash pulled his shirt over his head, stuck one arm through, and did the rapid ear-switch with his phone so he could fully don the garment. “Hey, I’d love to talk more, but I’m running late. You take care, okay?”

Ash disconnected and tossed his phone onto the bed. He stalked over to the full-length mirrors that covered his closet doors and struck a pose, staring at his reflection. Straightening the hem of the ridiculously overpriced shirt that made his shoulders look nine miles wide, Ash offered his reflection the smile he used from the front of every stage. Yeah. The outfit was a ten; worth every dollar. Ash’s body melted out of the pose. He retrieved his phone and hit the button to check his voicemail.

“Hi, Ash. This is Eliza Silver. Could you give me a call, please? I need to talk to you as soon as possible. Thanks. Bye.”

Ash groaned. Dropping his phone into his pocket, he stood and hunted around his bedroom until he found both of his shoes. He grabbed his wallet, then spent ten minutes searching the farmhouse for the keys to his Toyota 4Runner. He discovered them hiding in plain sight on the kitchen counter, beside the microwave and the box of movie theater butter microwave popcorn he and Dustin had picked up on their way home the night before.

Ash went out carefully so the screen door wouldn’t slam shut and wake Dustin. He hopped into his truck and took off for the nearest Starbucks and the biggest nonfat vanilla latte he could buy. If he was going to have to deal with anxious bridezillas all day, he needed as much caffeine as he could drink without flying to Columbia. Ash flipped the radio on and smiled. Dustin had been too tired to watch movies last night, and Jared had been out getting laid. Tonight they would all stay in, Ash decided. He’d be ready for a relaxing night at home, and besides… he wanted more up close and personal time with their new drummer.

I hope you enjoyed this bit of Boys of Summer. You can find it at Amazon and Smashwords. The second book is scheduled to release next spring and there will be six books in total.


I also have a giveaway, to celebrate this release. You can enter by liking my author page on Facebook, following me on Twitter, or – if you're already following me on FB and Twitter – leaving me a comment about your favorite music to listen to at a wedding reception. There are three gift cards as prizes and the winners will get to choose what they'd like to receive!

Winners will be announced on my blog on September 30th.

Link to the giveaway

Thank you again to My Fiction Nook for hosting this stop on my tour and I hope you enjoy Boys of Summer!

Tucker McCallahan has been lots of places, seen lots of things, and is still learning new stuff on the regular. Multi-published, bisexual, polyamorous, and slave to a big black cat named Emperor Inka, Tucker is a long-time member of the LGBT community and a proud educator/activist.