a States Of Love novella 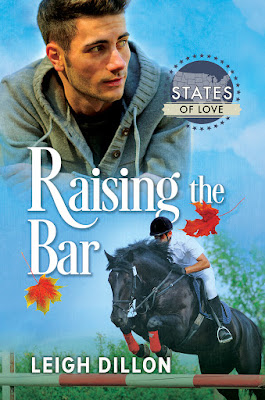 Destin Bellingham has inherited a problem. Thanks to his late playboy father, Destin faces putting a For Sale sign on his family’s historic horse farm. Getting his talented stallion, Black Sambuca, into the Grand Prix show ring would put Bellmeade back on the map—if only someone could make “Sam” behave like a show horse.

Disgraced top rider Tonio Benedetto has his own problems, but he can work magic with difficult jumpers, so Destin hires him despite his bad-boy reputation. The street-smart, openly gay loudmouth from Miami and the closeted, buttoned-down son of Old Dominion Virginia make a rocky pairing, but time is running out to save Bellmeade from bankruptcy.

Opposites attract, sparks of tension grow into flames of passion. But if Tonio fails to tame Sam, will true love become a lost cause too?

Hello, and thank you for stopping by to check out my new novella, Raising the Bar! Losing your home, especially when that home is a beautiful horse farm that’s been in the family for over two centuries, is a pretty stressful situation. Some authors like to roll with their angst—is there even such a thing as a happy Russian novel? Others go the comedy of errors route, but as a reader, I find that I can only laugh at other people’s catastrophes for so long before I start wanting to invite them over for a bottle of beer and a good cry. I confess to tending a bit toward the Russian approach in my own writing, but always with a mixer of humor. Because life is never pure tragedy, any more than it’s 24/7 straight-up comedy. There’s a running motif in this story of wiseacre Tonio telling poor, strait-laced Destin that he needs to work on his sense of humor. He’s right, of course, even though it takes a while for Tonio’s breezy attitude to rub off on his tradition-bound partner! Here’s a little preview of Tonio at work.

“So what’ve you got against the Maserati?” Tonio asked as the Rover crunched its way around the drive.
“I told you, the fob doesn’t work.”
Tonio closed his eyes and opened them again. “I mean, what’ve you got against the Maserati that a new battery wouldn’t fix?”
Destin chewed the inside of his cheek, unsure whether Tonio’s persistent nosiness was unwelcome or a relief. A lot of things needed saying, things nobody outside the Upperville social circle was likely to understand. But somehow telling those things to a stranger felt easier.
“Dad sold three good broodmares to buy that car,” Destin said. “If you wondered why the pastures are so empty, the Maserati is part of the answer.”
“So, if you sell it, you’ve got the price of at least two supergood mares.” Tonio worked his way around in the seat to face Destin, his leather jacket squeaking against the leather upholstery. “Pick a couple that’re a good match with Sam’s bloodlines. Then you’ll be ready to build up the bloodstock when Sam hits the ribbons. I’m kinda surprised you haven’t done that already.”
“I’ll get to it. I’m just… working through stuff.” Like a whole historic farm that fell on my head like a ton of granite. “Where am I supposed to find mares like that, anyway? I don’t have time to look at breeding stock right now.”
“Hey, I know some people,” Tonio said with a vague gesture toward the dark sweetgum trees flicking past the windows. “You want me to call them?”


“What kind of people?” Destin stopped at the end of the drive and lowered the window.
Tonio gave him a funny sidelong look. “International high-tech horse thieves,” he said, his voice dropping into a sinister croak. “They’ll get you anything you want. Change the lip tattoos, fake up some new pedigrees, badda bing!” Tonio paused and cocked his head. “Is that what you expected me to say?”
Destin, who had frozen with his hand over the gate keypad, goggled at Tonio. Tonio stared back at him, stone-faced. Then he smiled. The smile widened into a grin, and the grin became laughter.
“Oh my God. You thought I was serious. If I had a picture of your face…!” Tonio haw-hawed a few seconds longer and then got control of himself. “I meant I know legit bloodstock agents. I’ll call ’em if you like. Man, we have got to work on your sense of humor.”

Leigh Dillon is a native of horse-happy North Central Florida but has deep family roots in the Virginia and West Virginia areas. Coming of age in the dinosaur days of cable television, when fledgling channels filled their empty blocks of programming time by airing entire equestrian competitions, Leigh’s young brain became infected with a lifelong mania for show jumping, three-day eventing, and other exotic horse sports. Though tragically denied a pony of her own in childhood, Leigh has wreaked her revenge by including equine characters in almost everything she writes.

A bookbinder and librarian by trade, Leigh has also worked on local thoroughbred horse farms. Leigh’s short fiction has been featured twice in the Florida Writers Association annual story collection, and one of her book-length works received Book of the Year honors at the 2017 Royal Palm Literary Award.