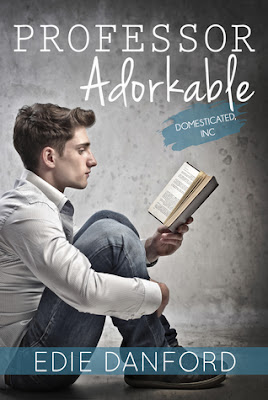 
What happens when a star-gazing professor falls for his hot young housekeeper? One heck of an earthy explosion…

Professor Marek Janos's genius at analyzing stellar explosions doesn't apply to his own disordered world. Forgetting to eat, sleep, and leave his lab has triggered some epic personal disasters. When his family insists he hire live-in help, he discovers home life has awesome benefits. His new housekeeper's smile sparks more energy than a supernova. And the way he moves? It rocks Marek's galaxy.

Pete Schulz took a tough fall from his high-flying life in Hollywood. But how does a guy whose best skill is getting dirty clean up his act? His new gig with Domesticated Inc seems like a great first step. Keeping house for a nerdy young astrophysics professor is exactly the low-key, no-chance-for-trouble job he needs, right?

Living together is surprisingly easy for both men. And fun. And more than a little hot. It's when they're faced with the idea of living apart that the truly messy work begins…

Those of you who haven't read Edie Danford's Ellery College series needn't worry. This book, while a crossover from that series, can absolutely be read as a standalone. Pete, one of the MCs of Professor Adorkable, was a secondary character in Unraveling Josh. I loved Josh and Nick's story but honestly didn't remember Pete.

In my review of that book, I wrote: "fucking Pete was the worst friend EVER; I wanted to kick his arse into next week." So obviously Pete did something. What, I can't recall. But I can imagine.

But Pete is trying to do better, BE better. That's why he has rules in place: no getting sexually involved with the boss (that would be Marek) and no falling in love (even if Marek, with his quirky speech patterns and dorky shoes, is hard to resist).

The book begins in the middle. Marek and Pete are already friends, and the attraction between them is like a live wire. I wish we'd gotten the meet-cute and seen the beginning of their relationship. I felt like I was missing a piece of the puzzle.

Even so, I really liked this story, and I absolutely ADORED Marek. Being in his head was a joy. He had a fondness for creative swear words and lists:

There weren't a lot of ways someone could interpret:

The book is told in a dual first-person POV, and each man's voice is distinct. Pete is lost and insecure; he now goes out in ratty sweats and doesn't manscape. But Marek doesn't care! He's fallen for Pete and doesn't want Pete to be just another part of a data set. The experiment is bound to fail when you've already arrived at the end result (and bought ALL the red balloons).

The interactions between Pete and Marek made this book. They bantered and talked about everything. They really worked so well together and had combustible chemistry.

I loved watching Marek interact with Zoe, one of his students. They had such a genuinely supportive friendship going, even if Zoe desperately wanted to give Marek a makeover. Speaking of makeovers, the scene where Marek gets a haircut was SO funny. Jealous Pete was jealous.

In the end, Marek needed to stand up to his controlling uncle and take charge of his own life. I actually liked that Pete left; this was an important catalyst in their relationship. They were no longer forced together, no longer employer/employee, and could begin a relationship on their own terms.

Edie Danford has such an engaging writing style. Her dialogue feels true to life, and there's plenty of humour and warmth in her stories. I am looking forward to more books in the Domesticated Inc. series.