ARC Review: Honeymoon for One by Keira Andrews 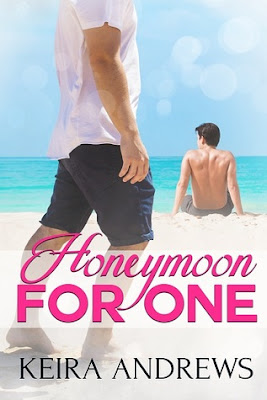 
Betrayed the night before his wedding by the supposed boy of his dreams, Ethan Robinson escapes the devastating fallout by going on his honeymoon alone to the other side of the world. Hard of hearing and still struggling with the repercussions of being late-deafened, traveling by himself leaves him feeling painfully isolated with his raw, broken heart.

Clay Kelly never expected to be starting life over in his forties. He got hitched young, but now his wife has divorced him and remarried, his kids are grown, and he’s left his rural Outback town. In a new career driving a tour bus on Australia’s East Coast, Clay reckons he's happy enough. He enjoys his cricket, a few beers, and a quiet life. If he's a bit lonely, it's not the end of the world.

Clay befriends Ethan, hoping he can cheer up the sad-eyed young man, and a crush on an unattainable straight guy is exactly the safe distraction Ethan needs. Yet as the days pass and their connection grows, long-repressed desires surface in Clay, and they are shocked to discover romance sparking. Clay is the sexy, rugged man of Ethan’s dreams, and as the clock counts down on their time together, neither wants this honeymoon to end.

Ethan lost his parents, his hearing, and his social identity all in the course of a few years. But he still had his boyfriend and his best friend. Michael and Todd were incredibly supportive as Ethan struggled with crippling depression.

The night before his wedding to Michael, Ethan is filled with nervous anticipation—a little doubt, but mostly joy. He rushes home to see his groom-to-be, only to be confronted by Michael's betrayal.

Ethan had my heart from page one. He was so gentle and vulnerable, too good for Michael and his cheating ways. Ethan wanted to marry the boy of his dreams, but the solo honeymoon to Australia would have to come before the wedding.

Clay is divorced and uninterested in dating. He actively resists his daughter's attempts at getting him to meet women through a dating app. Clay worked in the mines, a man's world, but quit following his divorce and now works as a tour guide, showing seniors the beauty of Australia. Clay notices Ethan, because Ethan is the youngest member of Clay's current tour group and the only one who's alone.

Ethan falls for Clay's Crocodile Dundee charm, his rugged looks, and his kindness. Clay just wants to help Ethan. He never shames Ethan when Ethan asks him to repeat something he said. He reminds others not to mumble and prints off notes so Ethan can read along with the tour. He goes with Ethan to buy a hat and tracks down extra hearing aid batteries.

Everything about Clay and Ethan's relationship rang true. The romance begins with friendship, but the scorching sexual tension is not far behind.

Clay is sixteen years older than Ethan and has never considered that he might not be straight. But Ethan is patient and doesn't push. The age gap matters naught when you stay up drinking beer and passing a note pad back and forth.

While the story is entirely relationship focused, the Australian setting comes alive. I dare you to watch this Quantas commercial and not get a little misty-eyed.

The chapters alternate between Clay and Ethan's POV, and the men's voices are distinct. Clay uses old-school Australian phrases, and his thought patterns differ from Ethan's. The author really paid attention to the details (when Ethan describes what Clay is wearing, he uses the word "tank top," but Clay refers to it as a "singlet"). Indeed, all the Australian characters sounded, well, Australian, not like glorified Americans.

(Disclaimer: I am not an expert as I am not Australian. I've never visited the land Down Under. But my colleague and good friend is from Australia, and I talk to her nearly every day. I am proud to say that after a year, I finally understand nearly everything she says.)

This story is perfect on so many levels: Clay's sexual awakening; the hot but ever-so-tender sex once the men get together; the complex secondary characters, particularly Clay's daughter Sam and his dog Gilly; the way Clay looks out for Ethan always; and the way Ethan is willing to risk everything to be with Clay.

The angst, once it arrives, doesn't linger. Clay acknowledges his fear and insecurity and comes to terms with his feelings. When Clay tells Ethan about his childhood and the homophobia he witnessed, it makes sense that he denied his sexual self for so long.

I really loved that while Ethan is hard of hearing, and the book doesn't sugarcoat the challenges he faces daily, Ethan's disability isn't the main focus of the story. Keira Andrews got everything right regarding the way Ethan dealt with life as a hard-of-hearing person. I say this with conviction because I am one, even though my impairment is more mild than Ethan's.

But I'm not surprised. Keira does her research always. There's a reason she's one of my favorite authors in this genre.

Lest I forget, I want to mention the ending, which has ALL. THE. FEELS. I would have been thrilled with just the last chapter because that kiss was everything, but we also get this incredible, heartwarming epilogue. Who knew cricket could be so damn sexy?

Spoiler: Ethan married the boy of his dreams. And they lived happily ever after.