ARC Review: Honey from the Lion (Love Across Time 2) by Jackie North 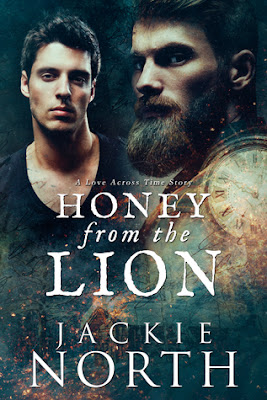 
Soulmates across time. A love that was meant to be.

The very first night a freak blizzard combined with a powerful meteor shower takes Laurie back to the year 1891. When he wakes up in a snowbank, his only refuge is an isolated cabin inhabited by the gruff, grouchy John Henton, who only wants to be left alone. His sense of duty prevails, however, and he takes Laurie under his care, teaching him how to survive on the wild frontier.

As winter approaches, Laurie's normal fun-loving manner make it difficult for him to connect with John, but in spite of John's old-fashioned ways, the chemistry between them grows.

Sparks fly as the blizzard rages outside the cabin. Can two men from different worlds and different times find happiness together?

In North's first Love Across Time book, a WWI soldier travels to the present. That story was told in an alternate POV, and both MCs were aware that one of them was a time traveler.

In Honey from the Lion, which is a standalone with no relation to the first book except for the time travel theme, one MC (Laurie, a 24-year-old software developer taking a much needed vacation on a Wyoming dude ranch to unwind and get away from it all) travels to the past (the year 1891 to be precise).

The story is told only from Laurie's perspective; the other MC (John, who works for the railroad and lives alone in a remote cabin in the Wyoming mountains) never finds out what the first MC sacrificed to be with him.

This story is intensely romantic and warm. It made me feel cozy and happy inside. Imagine the connection two people must share to be drawn together across centuries.

If you're a history fiend like me, you'll enjoy the descriptions of life in the late-19th century American frontier. I have always loved REAL history, not the wars and politics and treaties, not history written and rewritten by the "winners" (white, male, wealthy, hetero), but TRUE history about people and their everyday lives.

As such, I loved reading about Laurie and John making breakfast, sweeping snow out of the cabin, playing checkers, tending to their boots, and traveling to town to buy butter and bread.

If you're not a history buff, fair warning: this is a slow-burn, quiet story filled with minute details about life in an Old West cabin, entirely focused on the relationship between two men, one of whom has never known a man's (or, I suspect, a woman's) touch.

I wish John's voice had been included, because I adored his stoic ways and big, generous heart. I never felt like I truly got to know him.

The MCs seemed to exist solely for each other. We know Laurie has two close friends, but nothing else is said about his background or John's family. We learn only that John saw terrible, gruesome things at Wounded Knee Creek when he was serving in the cavalry. (Google "Wounded Knee Creek" to read the dark history of American genocide against Native Americans.)

The secondary characters, both in the present and past, were richly sketched. The steam, light and subdued, was appropriate to the story. The ending was happy but tentative.

I was disappointed that Laurie left his friends with no sign or message and that he never told John about from whence he'd arrived. I felt like he didn't trust John enough.

For stories such as these, ones that require a suspension of disbelief, I believe an epilogue is a necessity, but Jackie North doesn't write them. She leaves her endings with a vague They lived happily ever after, and it's not quite enough, at least for me.

Honey from the Lion is about following your heart's desire. It's about a man and his Little Red Fox, about sacrifices, the warmth of a wood fire, hot coffee and hearty stew. It's about a love so strong, it cares naught for time or space and will find you no matter when you are.