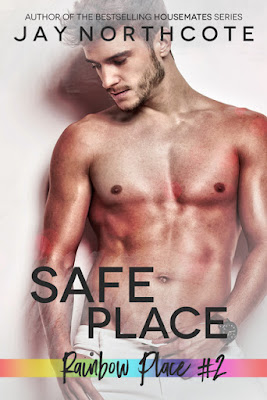 Where do you go when your home is no longer a safe place?

Alex is about to turn eighteen and is firmly in the closet. He’s been biding his time, waiting to escape to uni, and finally come out away from the oppressive influence of his homophobic father. When he flunks his exams, he’s stuck in the small town of Porthladock—and what’s worse is that he’s working for his dad. The only thing that makes it bearable is Cam.

Cam’s comfortable with his bisexuality, but he doesn’t broadcast it. Young, free, and single, his social life revolves around playing rugby and hanging out with his mates. He’s attracted to Alex, but with the six-year age gap, Cam’s wary of getting involved. Plus, he thinks Alex needs a friend more than he needs a lover, and as their friendship grows, Cam decides he’s not willing to risk ruining it for casual sex.

When Alex’s dad finds out about his sexuality, Alex is suddenly both jobless and homeless. He finds work at Rainbow Place, the local LGBT-friendly café and Cam lets Alex stay in his flat for a while. But Alex would rather be sleeping in Cam’s bed than on his sofa. With them both living under one roof, their feelings for each other grow stronger, and the sexual tension is hard to ignore. Will giving in to it ruin their friendship and complicate things for Alex even more?

Although this book is part of a linked series, it has a satisfying happy ending, and can be enjoyed as a standalone.

The second book in the Rainbow Place series explores the relationship between Alex, who’s nearly 18 and living in the closet due to his bigoted parents, and Cam, who’s 23 and works in landscaping.

Unlike the first book in the series, this one is a YA/NA romance. The first couple chapters of Safe Space overlap with Rainbow Place, but I think this story would work fine as a standalone.

Cam is bi and attracted to Alex, but he worries that Alex doesn’t the need the complication of a relationship. He also doesn’t want to ruin their friendship. And that, right there, is the main conflict in the story.

Alex values Cam’s supportive presence, but he wants more. When Alex is outed in the worst possible way, his cruel, hateful father throws him out. Cam and Wicksy, Cam’s hilarious straight-but-not-narrow roommate, give Alex free rein of their couch, and it becomes even more difficult to resist the sexual tension between them, what with Cam walking around in boxer briefs and all.

What I loved about this story: the secondary characters (Wicksy, plus Alex’s BFFs); the slow burn (and I mean turtle-slow; save for a couple of kisses, the guys don’t get together until 80 percent); the hopeful HFN (appropriate considering how young the MCs are); and the smooth flow of the writing (Jay’s stories never bore me).

What made me crazy: mostly Cam, who gave off mixed signals that were unfair to Alex. This story is also surprisingly low on the steam (there’s only one scene toward the end). I think it’s also worth mentioning that there is a . Shockingly, this didn’t bother me at all. I thought it was fitting and kind of wished Alex hadn’t been waited for Cam to change his mind quite so patiently.


I read this book in one sitting (or should I say lying; I stayed up past midnight to finish) and really enjoyed it. There are so many potential pairings in this series. I have my eye set on Dylan from the café and a certain mysterious gentleman.