Cover Reveal: The Nerd and the Prince by B.G. Thomas

We are delighted to reveal the cover for B.G. Thomas' upcoming release

The Nerd And The Prince

Prince Charming is the man next door.

Small-town business owner Jason Brewster has big dreams: world travel, adventure, and most of all, a passionate romance worthy of a fairy tale. But he doesn’t believe fantasies can come true….
Until Adam moves in next door.

He’s handsome, cultured, European, and best of all, interested in Jason. It’s like something out of the stories Jason loves.

But Adam—whose real name is Amadeo Montefalcone—has a secret. He's royalty, prince of the small country of Monterosia. Only he doesn't want to rule, and especially doesn't want the loveless marriage waiting for him at home. So he ran away in search of true love. With a man. And with Jason, he finds it.

But Adam can't run forever. The truth will come out. If Jason can forgive Adam’s deception, they might find their happily ever after. 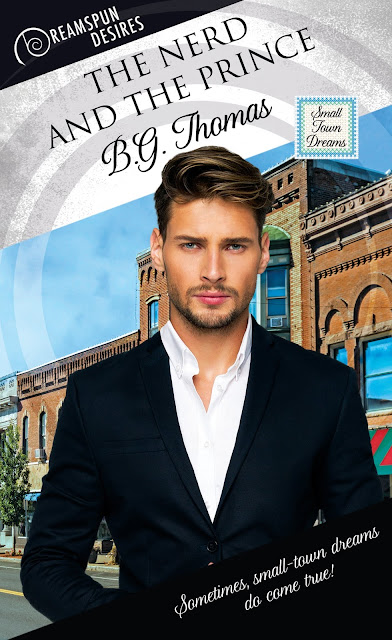 B.G. “Ben” Thomas lives in Kansas City with his husband of more than a decade and their delightful dogs Sarah Jane and Oliver. He is blessed to have a daughter as well as many extraordinary friends.

Ben loves romance, comedies, fantasy, science fiction, and even horror—as far as he is concerned, as long as the stories are entertaining and about people, it doesn’t matter the genre. He has gone to literature conventions his entire adult life where he’s been lucky enough to meet many of his favorite writers. They have inspired him to create his own stories; it is where he finds his joy.

In the nineties, he wrote for gay adult magazines but stopped because the editors wanted all sex without plot. “The sex is never as important as the characters,” he says. “Who cares what they are doing if we don’t care about them?” But then he discovered the growing male/male romance market and began writing again. He submitted a novella and was thrilled when it was accepted in four days. Since then the romantic tales have poured out of him.