Blogtour: Shelter From The Storm by Kate Sherwood

Shelter From The Storm 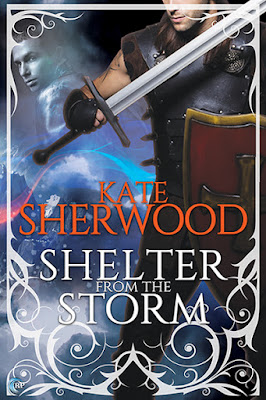 A healer and a warrior fight to survive the winter . . . and each other.

Grif is tired of life as a mercenary—tired of life, period. So he heads off into the mountains, not much caring whether he lives or dies. But when his indifference leaves him unconscious in a snowbank, a stranger finds him and insists on dragging him back from death.

Kiernan doesn’t really have time to nurse a stranger back to health; he’s on an important mission. He doesn’t know why the message he’s carrying is significant, but he’s determined to deliver it, even if it means risking his life in the winter mountains. Still, he can’t just walk away from a fellow traveler in need.

Winter Camping
I’m Canadian. I’m good with ice and snow and winter. When I spent almost a decade in balmy Vancouver, I missed the winters I was used to in Ontario and Quebec. Winter is good.
That said, I’m generally happiest experiencing winter with a couple hours of properly-dressed outdoor frolicking followed by the rest of the day curled up by the fireplace. I’ll glance over to the window now and then just to be sure it’s still winter outside, and then snuggle in a little deeper, smug in my warmth and comfort.
But sometimes, something calls to me. My pioneer ancestors remind me that I’ve got their blood in me and they were survivors, and I could be, too. They dare me to find a deeper experience of winter, to understand it the way they did. They tell me it’s time to go outside for real.
And, sometimes, when my common sense has gone completely off line, I listen to them.
Winter camping is not for the faint of heart or the easily chilled. I only do it in a very minor way (often only a hundred steps from my back door, or in a spot right next to my car so I could climb in and turn the heater on if things got bad). I’m not climbing Everest or anything!
I have a good four-season tent, a thick foam pad to keep me off the cold ground, and lots of dry clothes. And, of course, I have the house or car as a backup plan.


The characters in my new book, Shelter from the Storm, aren’t so lucky. They aren’t well-prepared for their ordeal and they’re stuck in the mountains for the whole winter, not just a quick overnight. So they have to get a bit more creative than I do.
My characters build snow burrows, an established technique for emergency shelter, so I built one, too, as soon as we finally got enough snow to manage it. (I ended up piling a lot of snow up with a shovel to create more of a quinzee situation rather than burrowing into a natural drift.) It was surprisingly cozy inside, but I was too worried about the possibility of collapse to sleep in it overnight. The risks you take in a mountain survival situation aren’t the same as the ones you take in a peaceful back yard!
My characters also had to worry about food, and scurvy, and, of course, each other—it’s hard to trust someone with your life when you think they may want you dead! I had none of these challenges.
But when I was curled up in my quinzee, warm and cozy while the wind howled outside? I felt safe. I felt sheltered. And if there’d been someone there beside me, someone who’d slaved away with me while I was digging the damn thing? I might be inclined to forgive him for past murder attempts. After all, I’d want his body heat to keep me warm!

Contemporary, suspense, scifi or fantasy--the settings are just the backdrop for her characters to answer the important questions. How much can they share, and what do they need to keep? Can they bring themselves to trust someone, after being disappointed so many times? Are they brave enough to take a chance on love?


To celebrate the release of Shelter from the Storm, Kate is giving away a $10 Riptide credit! Leave a comment with your contact info to enter the contest. Entries close at midnight, Eastern time, on August 26, 2018. Contest is NOT restricted to U.S. entries. Thanks for following along, and don’t forget to leave your contact info!