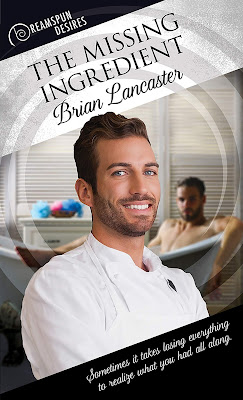 Sometimes it takes losing everything to realise what you had all along.

Up-and-coming London chef Marcus is poised on the edge of success, but apart from the occasional casual encounter, the only men who seem to stick around are investors. His best friend Lorraine Bradford—Raine—and her family used to keep him grounded, but a horrible accident took her life and left Marcus’s godchildren without a mother.

But if the death throws Marcus’s life into turmoil, it’s far worse for her husband, Tom—especially since she died in a car with a strange man. Tom is consumed by grief, and he shuns the help of friends. Until almost a year later, that is, when Marcus stumbles upon Tom out with his daughters and sees how far Tom has fallen. So he steps in and, bit by bit, helps them to rebuild their world until their lives return to a semblance of normality.

Then the unexpected happens: Tom confesses he has romantic feelings for Marcus, and nothing can ever be the same.

Ten minutes later Marcus heard Tom’s soft footfalls on the stairs.
“You want a beer?” said Marcus, twisting around and yanking open the fridge door as Tom hit the bottom step. “Got a couple of cold ones in here.”
“Actually, another reason I came back is because—” said Tom, hesitating momentarily before going on. “Because I wanted a chat with you.”
“Oh, shit,” Marcus hissed, two bottles of Asahi in one hand, and quietly closed the fridge door shut, his face falling. “What have I done now?”
Tom appeared genuinely mystified.
“Sorry?” he said, taken aback. “What do you mean?”
“Whenever you want to chat with me, it usually means you’re either going to tell me to fuck off or back off.”
“No, I—” said Tom, his eyebrows scrunched up in confusion, before he deflated with a sigh and gently shook his head. “Is that what you think? Hell, have I really been that much of a dick? After everything you’ve done for us, for me?”
“You’re not a dick, Tom. But you can be bloody stubborn at times. Beer?”
Tom ambled over and took the proffered beer bottle, twisted the lid, and took a long draft. Afterward, visibly relaxing, he perched on the barstool. Marcus went and joined him, leaving a sizable distance between them.
“What I meant was, I don’t get to hang out with you anymore. And I know that’s what I asked for, but in all honesty, I miss it, I miss our little chats.”
“Yes, well, whose fault is that?”
“I know, I know. I already claimed the dick card, remember?”

Marcus relaxed too, then leaned forward to clink the neck of his bottle with Tom’s. “Well, if it’s any consolation, Tom, I miss our grown-up time together too.”
And it suddenly dawned on Marcus how much he really had missed just chatting to Tom. If only he could master his infatuation. Maybe now would be a good time to win some points in the friends stakes, tell Tom about Damian Stone, tell him what they had found out. But while the thoughts swirled around in his head, Tom had started talking.
“I really do like that shirt on you, Marcus. Is it cotton?”
“Egyptian cotton,” said Marcus absently.
“Looks comfortable. Mind if I...?” Tom held a hand out as if waiting for permission to touch the material.
“Sure. Knock yourself out.”
Tom reached across the distance and pinched the material beneath Marcus’s collar between his thumb and forefinger.
“This Indian tailor round the back of Edgware Road makes them for me. Has done for a couple of years. If you want, I can—”
When Marcus raised his eyes to meet Tom’s, all thoughts left him, the dark heat in that gaze blistering. A sudden memory came back, of Tom sitting on the garden rug, staring angrily at him. Except it had not been anger at all but lust. Instinctively he inhaled a deep breath as Tom fisted the shirt and pulled Marcus out of his chair toward him. Even as Tom brought their mouths together, Marcus hesitated, fully expecting him to recoil, to reevaluate in disgust what he had initiated. But the moment never came. Closemouthed lips pressed onto Marcus’s own—firm, urgent, yet still a little unsure. And then, a second later, the essence of Tom Bradford hit Marcus hard, spicy aftershave mixed with Tom’s natural body scent and heat, so masculine, intoxicating and addictive. Instinctively Marcus’s arms found their way around Tom’s neck and he stepped into the man’s body, molding himself into the embrace. When he pushed his tongue between Tom’s lips, forcing them to part, Marcus took control of the kiss, touching, stroking, exploring, snaking his own tongue around Tom’s. In response, Tom shuddered and released a deep moan, before lifting Marcus off the floor and walking him backward until he had him pinned up against the fridge door. Breathless, Marcus pulled his mouth away.
“Well. That’s one mystery solved,” whispered Tom as he lowered Marcus back to earth, his lips tickling Marcus’s ear.
“What do you mean?”
“I wondered if my attraction to you was all in my head” came Tom’s husky voice before he thrust his substantial rock-hard groin into Marcus’s own arousal.
“Apparently not.”

Author note: This scene was deleted due to the darker nature of the subject matter – the funeral – which the publisher thought unnecessary, and also the removal of Lorraine’s sister, Christine, from the story.


A coldness reflected in what filled his insides, on the day he’d not only lost his best friend, but her whole family.

BRIAN LANCASTER is an author of gay romantic fiction in multiple genres, including contemporary, paranormal, fantasy, crime, mystery, and anything else his muse provides. Born in the sleepy South of England, the setting of many of his stories, he moved to Southeast Asia in 1998, where he shares a home with his longtime partner and two of the laziest cats on the planet.

Brian Lancaster once believed that writing gay romantic fiction would be easy and cathartic. He also believed in Santa Claus and the Jolly Green Giant. At least he still has fantasies about those two.

Born in the rural South of England in a town with its own clock tower and cricket pitch, he moved to Hong Kong in 1998. Life went from calm and curious to fast and furious. On the upside, the people he has since met provide inspiration for a whole new cast of characters in his stories. He also has his long-term, long-suffering partner and two cats to keep him grounded.

After winning two short story competitions in 2006 and being published in a compendium, he decided to dive into writing full- length novels. Diving proved to be easy; the challenge has been in treading water and trying to remain afloat. Cynical enough to be classed a curable romantic, he is not seeking an antidote. When not working or writing, he enjoys acting in community theater productions, composing music, hosting pub quizzes, and any socializing that involves Chardonnay. And for the record, he would like to remind all those self-righteous white wine drinkers that White Burgundy, Chablis, and Champagne are still essentially Chardonnays.