Trespassers break into the Lovely Pines Winery, steal nothing, and commit no vandalism.
What Gives?

This could have been a local headline at the opening of Don Travis’s The Lovely Pines. This, the fourth in his BJ Vinson Mystery Series, is centered around three main characters: BJ Vinson, Paul Barton, and the state of New Mexico. 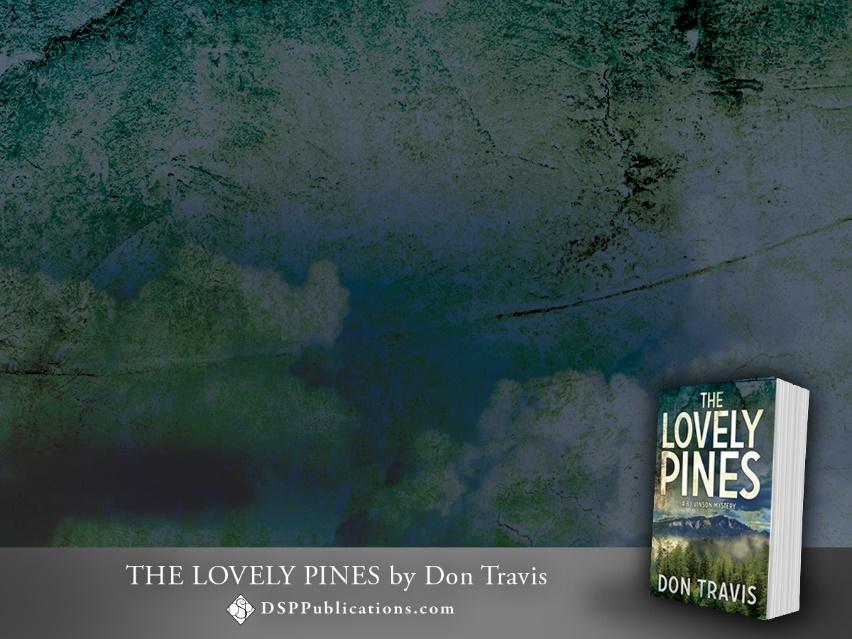 BJ is a gay, former marine, ex-Albuquerque cop turned confidential investigator who does the heavy lifting on his sometimes interesting and challenging cases. Paul, a grad student in UNM’s School of Journalism, provides a different sort of interesting challenge on the home front. And New Mexico is the beautiful setting for all the books in the series.

The Zozobra Incident takes place in Albuquerque and Santa Fe. The Bisti Business exposes the reader to Taos and Farmington and the other-worldly Bisti-de-Na-Zin Wilderness area. City of Rocks explores the bootheel country, and this novel, The Lovely Pines, takes us to the wine country north of Albuquerque and to Las Cruces and Carlsbad. The upcoming Abaddon’s Locusts takes place largely on the Navajo Reservations (yes, I said reservations—plural). The novel emerging from my pen as we speak, The Voxlightner Scandal, is centered in Albuquerque and the Sandia Mountains looming to the east. So you see, I consider my adopted state as a equal, complex, and colorful character in my novels. I just hope my word pictures do her justice.

The blurb for The Lovely Pines gives the reader the flavor of the novel: 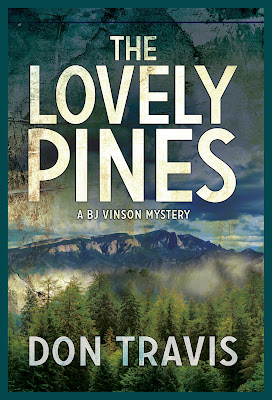 When Ariel Gonda’s winery, the Lovely Pines, suffers a break-in, the police write the incident off as a prank since nothing was taken. But Ariel knows something is wrong—small clues are beginning to add up—and he turns to private investigator BJ Vinson for help.

BJ soon discovers the incident is anything but harmless. When a vineyard worker—who is also more than he seems—is killed, there are plenty of suspects to go around. But are the two crimes even related? As BJ and his significant other, Paul Barton, follow the trail from the central New Mexico wine country south to Las Cruces and Carlsbad, they discover a tangled web involving members of the US military, a mistaken identity, a family fortune in dispute, and even a secret baby. The body count is rising, and a child may be in danger. BJ will need all his skills to survive because, between a deadly sniper and sabotage, someone is determined to make sure this case goes unsolved.


Need more? Okay, here’s an excerpt from the end of Chapter 1. BJ has just been engaged by Ariel Gonda, the owner of The Lovely Pines Winery and Vineyard, to investigate a break-in. I chose this passage not for action but because it gives insight into some characters in the novel”

After submitting to another half hour of questions, Gonda executed my standard contract, handed over a check for the retainer, and made arrangements for me to visit the Lovely Pines. Then he took his leave.
“Such a distinguished gentleman,” Hazel observed when she came to collect the contract and the check. And the two bottles.
“You’re just a sucker for an accent.” I handed over the digital recorder for transcription, as well. Earlier this year, Hazel had threatened rebellion if I didn’t do away with the tape recorder I’d used for years. I’d probably have ignored her except the thing was virtually worn out. Might as well join the twenty-first century, right?
My formerly dowdy office manager scoffed. “I can take them, or I can leave them.”
She had blossomed since she and Charlie Weeks were married in a civil ceremony held in my living room last New Year’s Eve. Like me, Charlie was a retired cop. But he’d put in his time at the Albuquerque Police Department, whereas I was medically retired by a gunshot wound to the thigh. Last year he earned his way into a partnership as the only other full-time investigator in the firm. After the legal documents formalizing this were signed, I made a big deal out of having the gold lettering on the outer office door redone to read “Vinson and Weeks, Confidential Investigations,” but Hazel insisted I’d only done it because someone scratched a hole in the paint on the letter C.
“There will be a lot of background investigations on this one,” I told her.
“Deep?”


“Record checking for the most part, I imagine. Unless that turns up something that needs to be pursued.”
“Hmm.” She left for the outer office.
I swiveled my chair to the window and took in the view that anchored me to my third-floor suite of offices in a renovated, downtown historic building on the southwest corner of Copper and Fifth NW. I enjoyed looking out the north-facing window and imagining I could look down on my home at 5229 Post Oak Drive NW. By craning my neck to the west, I could almost see Old Town where the twelve original families settled the new Villa de Alburquerque in 1706. Day or night, the scene outside that pane of glass always grabbed me.
Like a lot of confidential investigators, I preferred working for attorneys. They understood the limitations of my profession. We were fact collectors, not sleuths in the popular sense of the word. Movies and TV programs and novels had skewed the public perception of my trade to the point that private citizens often suffered an unrealistic expectation of what our job really was. I worried that the dramatic outcome of that nasty Bisti business might have led Ariel Gonda to the same misconception.
Turning back to the desk, I picked up the file I was currently working. Local attorney Del Dahlman—who was my significant other before I was shot while serving with the Albuquerque Police—had hired me to look over the shoulder of the city’s fire department as they conducted an arson investigation. One of his client’s warehouses burned to the ground in a spectacularly stubborn blaze a few days ago. Del was concerned about where the inquiry might lead. I was beginning to think the case was heading precisely where he did not want it to go.
After phoning the lieutenant heading the arson investigation, I drove out to meet him at the scene of the fire for another walk-through. Like most cops—and ex cops—I wanted to see the scene of the crime up close and personal. More than once.
That walk-through took the remainder of the day, so I headed straight home from the South Broadway site to clean off the soot and mud. With any luck, the cleaners could salvage my suit pants. If not, I’d add the cost of a new pair to Del’s bill.
I was surprised to find Paul home when I arrived. In his second year of a UNM graduate program in journalism and holding down a job as a swim instructor and lifeguard at the North Valley Country Club, Paul Barton carried a lot on his plate. Although we’d been together for almost three years now, I sometimes felt we were ships passing in the night. The nights were perfect, of course, but our schedules didn’t allow us much time in between.
I’d offered him a job at the office, but he was an independent cuss and turned me down. He was still driving his ancient, purple Plymouth coupe even though he could have afforded a newer model. But he was determined to finish his education without any debt hanging over his head.
I returned his smile as he stood up from the kitchen table where he’d been studying. After a gentle but stimulating kiss, a pot of his very special stew percolating on the stove captured my attention. The savory aroma of green chili and chicken and potatoes sent my sudden hunger wandering back and forth between the gastronomic and the carnal.
“With warm flour tortillas?” I asked.
“And butter.” He grinned. “After dinner, I’ll expect a reward for my culinary efforts.”

Now for the uninteresting part. The part about me. I’m an Okie born and raised who rambled around Germany while in the US Army and Denver and Albuquerque while in the business world. A tubercular child, I grew up in the library of my small hometown rather than on the sports fields. So what else should I do but write? Well, I was a paint artist for a while—oils and still-life mostly—but that didn’t scratch my creative itch like writing did. I put away the brushes and took up the pen… well, the computer. Finding myself widowed in 2009, I flirted with moving back to Texas where most of my family has resettled, but the pull of New Mexico proved too strong. Here is where I choose to be and here I will remain.


Heartfelt thanks to Sandra at My Fiction Nook for permitting this guest post. Appreciate it, New Mexico style (that is with roasting green chili and wide-open spaces).