Blogtour: The Long Way Around by Quinn Anderson

The Long Way Around

I’m Quinn Anderson, author of Fourteen Summers and the Murmur Inc. series. Welcome to my blog tour for The Long Way Around! Stay tuned to get fun facts about this release, learn about our leading men, and hear about the many road trips I took in my antique car, Lou. Leave comments for a chance to win a $10 Riptide gift card. I look forward to chatting with you all! 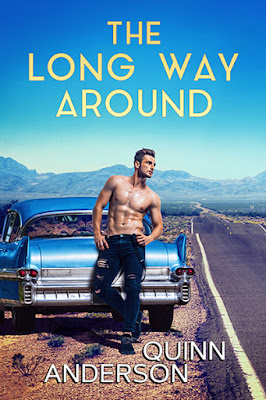 Sam Cooper is the definition of an introvert: shy, bookish, and the sort to think a wild Friday night involves ordering takeout. He enjoys his quiet life, but after a bad breakup, he’s been yearning for a change of scenery. Luckily, his best friend and former college roommate has the solution.

Wesley Reed—a jokester and expert Sam-handler—proposes an epic road trip to a wedding across the country. They’re both between jobs and boyfriends. Why not hit the open road and make some memories?

Stuck in close quarters for the first time since their dorm days, they’re both surprised at the heat that springs up between them. As best friends, they’ve shared so much over the years, so why does sharing a hotel room—and occasionally a bed—make them want more? Chemistry this smoldering is hard to ignore, but there are road blocks to their romance. Wesley’s keeping a secret, and Sam can’t rely on Wesley to drag him out of his comfort zone forever. If they’re not careful, their relationship may take the ultimate wrong turn.

My Second Road Trip, or the Story of How I Lost My Voice

The second road trip I ever went on was with my best friend, Teal. She and I met freshman year of college through mutual friends, though we didn’t bond until much later. I apparently made enough of an impression that when we randomly took the same class two years later, she remembered my name and insisted on sitting together. We were inseparable from pretty much that day forward.
Our senior year, we decided to drive to a state neither of us had ever been to: Alabama. There was a convention going on called KamiCon, and some of our favorite voice actors were going to be there, including LittleKuriboh and the creators of Marble Hornets. Plus, I had an internet friend who lived near the Con named Katie. She was actually a huge fan of my fanfiction before I ever started writing books, and she offered to let us sleep on her air mattress if we came up. That pretty much clinched it for us. We had some concerns, however, because Katie lived outside of the city the Con was happening in. Like, way outside. In the dark, creepy woods. Prime territory for two co-eds like us to get lost down a backroad and murdered, horror-movie style. But Teal and I decided to put our faith in the heart of the cards and take a chance.
We were rewarded with a hell of a good time. The Con was a ton of fun, we got to meet everyone we wanted to meet, and my Internet friend and I finally became irl friends. But the funny thing is, one of the best moments of the whole trip happened before we even got where we were going. It was an eight-hour drive to the Con, and we had to make it in one day. I knew there were going to be dull moments, so I made a playlist for Teal and me to listen to on the drive there. Not just any playlist either, but a mixture of pop, ridiculous country music (naturally, Sweet Home Alabama made the list), and joke songs that I thought we could laugh over.
One of the “funny” songs I included on the list was the Thong Song. Remember the Thong Song? Well, that was meant to be a one-off nostalgia-listen we could giggle over, but instead it became the anthem of the entire trip. We listened to it on repeat. It’s a surprisingly majestic song if you pay far, far too much attention to it. We invented operatic covers of it. We sang it with different celebrity voices. By the end of the trip, we could have sung it backwards. It’s an inside joke between Teal and me to this day, and I don’t think I’ll ever be able to explain why it resonated with us so much at that particular moment in our lives.


By the time we got home, we were exhausted and about one more song away from losing our voices, but it was an amazing trip. Far more amazing than I was expecting. I really didn’t think I was going to like Alabama, but it was beautiful, and we got to see southern hospitality in action. I know everyone says that road trips are about the journey, not the destination, but in this case, we got both. 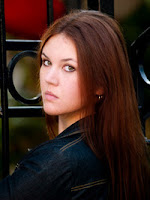 To celebrate the release of The Long Way Around, Quinn is giving away a $10 Riptide credit! Leave a comment with your contact info to enter the contest. Entries close at midnight, Eastern time, on August 11, 2018. Contest is NOT restricted to U.S. entries. Thanks for following along, and don’t forget to leave your contact info!