Thank you to My Fiction Nook for hosting me today!

In The Gentle Dom, Barclay is a stuntman. He loves his job, he loves doing parkour and for him the American Ninja Warrior course the Iron Eagle Gym has added is such a good idea. Now, during the course of this novel, he isn’t doing any of that because he’s injured, but that doesn’t mean I can’t share with you my top five favorite American Ninja Warrior participants.

I absolutely love the show. The athleticism of these men and women is amazing. And so are their bodies. One of my favorite things about ANW though is the way the athletes all support each other through their runs. I love that. Just because they each want to excel doesn’t man they can’t support and encourage each other to excel as well.

So without further ado, here are my Top Five Favorite ANW athletes.

5. Isaac Caldiero – the very first to win the million dollars for complete the course. He would have been in my top five even before winning, though. He was always amazing to watch working his way through the course.

4. Kevin Bull – the bald one. He’s got alopecia, which gives him a very unique and memorable look. He’s also a hero to kids with the alopecia and adore that he mentors them, and that a bunch of them always show up to support his runs.

3. Drew Dressel – I think he’s all around one of the best ninja warriors out there. He seems to excel at each and every type of obstacle. It’s a little surprising that he hasn’t finished the finals course yet. I’d love to see him do it this year.

2. Grant McCartney – The Island Ninja. I love his joy. I love his little dances throughout the course. It just makes me happy to watch him.

1. Jessie Graff – first female to finish the first stage of the finals course. First female to finish the second stage of the finals course. There is nothing this woman can’t do. They have a rule where the top five female city qualifiers go to the city finals and the top two female city final qualifiers go to the big finals course – no matter where they fall in the rankings. Jessie thumbs her nose at that rule – she qualifies on her own merits. Hell, one year she was the first person to make it all the way through to the buzzer on the city finals and when she finishes on the finals courses, her time is right up there with the top finishers. So there. Plus, she has the sexiest abs, man or woman in the ninja warrior community!

Who are your favorites? 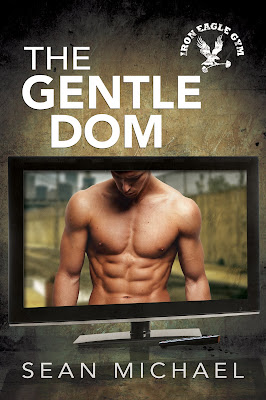 When one of their own is threatened, the men of the Iron Eagle Gym will stand together and prove they are stronger as a family.

Stuntman Barclay Drambor suspects his fall from a roof was no accident. He believes his abusive ex was responsible, but he can’t prove it. Fortunately, a year has gone by with no word from Duncan, letting Barclay move on with his life—and that means dealing with the aftermath of his injuries. He finds personal trainer Reece “Rec” Gordon through a member of the gym, and it’s not long before their workouts together become much more intimate. Rec is gentle and goes out of his way to make Barclay comfortable, and in no time there’s talk of moving in together….

But just as Barclay is healing and finding a place to belong, Duncan returns to destroy his happiness. Though Duncan will learn he’s messing with the wrong group of men, in the end, Barclay must face him. Will Rec’s love and the friendship of the others at the gym give him the confidence to stand up for himself?


Best-selling author Sean Michael is a maple leaf–loving Canadian who spends hours hiding out in used book stores. With far more ideas than time, Sean keeps several documents open at all times. From romance to fantasy, paranormal and sci-fi, Sean is limited only by the need for sleep—and the periodic Beaver Tail.