Blogtour: The 7th Of Victorica by Beau Schemery

The 7th Of Victorica 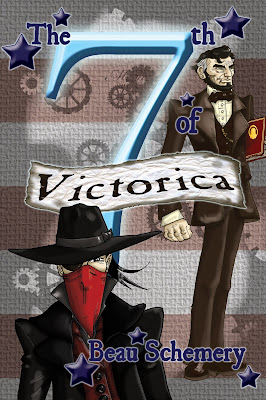 After freeing Queen Victoria from the evil plans of the wizard Fairgate and reuniting London once again, Seven, still contending with the ghost of a previous enemy, is called on to turn his unique brand of problem solving to the colony across the pond, Victorica. The former free states of America have a cancer growing within: slavery, perpetrated and protected by the Confederacy of the South. A wealthy group of Southern landowners and businessmen have seized power in Victorica, and rumors are flying about assembling an army and threatening war.

When Seven and his lover, Silas Kettlebent, are sent to investigate, they find the cancer runs deeper than anticipated and may be even more malignant than they’d first thought. With a ragtag team of slaves, criminals, politicians, and Abraham Lincoln, Sev and Silas must find a way to avert a civil war and, as far as Sev is concerned, free the colonies and citizens of Victorica as well.

But Sev’s indiscriminate use of magic he doesn’t quite understand has awakened another’s ire and stoked a thirst for revenge over the events in London. 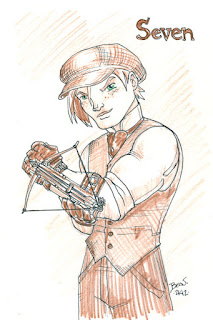 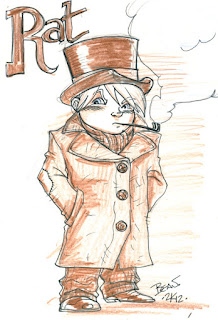 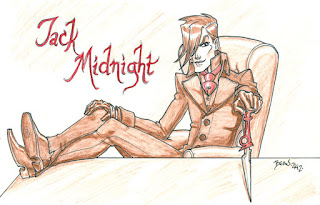 As a writer there are always people offering advice or suggestions. Things happen or conversations occur and inevitably someone tell you, “You need to put that in a book.” Sometimes they’re right. Once in a while a crazy situation occurs that, as an author, you just feel needs to go in a book. A lot of times those are the parts of books that people find the most far-fetched. Go figure. Often an author’s friends think they would make great characters in a book. Sometimes an author’s friend more or less demands to be in a book.

My friend James is that douchey friend. He’s also one of my oldest and best friends. That’s how he found himself as a major character in The 7th of Victorica. His family is in there too, and a lot of the in jokes, and history that we’ve shared had a major influence on their characters and the course they take. I think it really strengthened the work because I think you can really fell their reality.

The other plus is those characters aren’t really your friends so it’s your duty to really mess with them. Or not. But one of the things I’m most excited to see is how my buddy, James reacts to his portrayal in this book. I won’t tell you which character is based on him, but he’ll know. And ultimately, I think he’ll be entertained with how his character ends up in this book and will be even more excited to see how he progresses into the next book. Because there will be at least one more book in the series to wrap up Sev’s story. It will be the biggest challenge Seven has faced yet, and my friend’s character will be a major part of it. But for now, enjoy an excerpt from The 7Th of Victorica, Gadgets and Shadows Book 2:


Wrathsbury sat across from them. “How much do you know about the colonies, Sev?”
He shifted in his seat. “Not much,” he admitted. “I know Fairgate managed t’talk Her Majesty int’retakin’ them with the Steamcoats.” He paused, studying Wrathsbury’s and Silas’s expressions. “But beyond that? Not a bit. I’d considered takin’ a trip there but haven’t found the time. There are Indians, savages attacking the western settlements. There are outlaws and lawmen. I’ve read a few chapbooks about ’em.”
Wrathsbury nodded. “That’s the consensus. But it’s certainly not the whole story.”
“No?” Sev asked.
“No,” Silas agreed. “The entire system of government in the colonies is terribly corrupt.”
“Isn’t all government corrupt?” Sev suddenly realized what he’d just said. “No offense,” he added, looking at Wrathsbury.
“None taken.” Wrathsbury sipped his scotch with a smile. “And for the most part, you’re correct. Sadly. But the state of the colonies is extra troubling.”
“Fairgate’s people largely ignored the problem because the offending parties were filtering money to him. He used his mystical influence over the queen to dismiss the questionable behavior of the colonists,” Silas explained.
“Questionable behavior?” Sev asked.
“Slavery.” Wrathsbury fixed Sev with a serious gaze.
“Slavery?” Sev had heard the rumors. He wondered if it was anything like he and the other children had experienced in the factories.
“It’s despicable.” Wrathsbury drained his scotch and stood to pour another. “Our government has tolerated it for too long, and I don’t know if we can fight it now.”
“How so?” Sev asked.
“Victorica is polarized philosophically and financially,” Silas stated. “It’s ironic in a way.” He sipped his tea.
“The North and the South are splitting like our East and West at this time some years ago,” Wrathsbury added. “The North has become extremely industrialized like Blackside.”
Silas nodded. “And the South is affluent and decadent.”
“And they’ve purchased most, if not all, of the major factories and financial institutions of the North. They have basically wrested control of the entire industrial system and, in extension, the governing bodies of the colonies.”
“States,” Sev said without thinking.
“Hmm?” Wrathsbury hummed.
“Don’t they call them states?” Sev asked.
“Oh. Oh yes. I suppose they do.” Wrathsbury frowned. “At any rate,” he continued, regaining his composure, “the Southern aristocracy, as it were, basically controls the entire country. The Northerners don’t agree with their Southern brothers’ philosophy on slavery, and their attempts at offering safe harbor for freemen has resulted in most of those slaves taking jobs in Southern-owned factories in the north.”
“They escape from slavery to slavery,” Sev said, realizing the futility of the slaves’ situation. “Damn.”
“Indeed.” Wrathsbury sipped his scotch. “I have created a Shadow Ministry, something of a secret police force for just such endeavors, and at the moment, Silas is my sole agent.”
“The Ministry of Shadow?” Sev asked.


Wrathsbury shrugged. “MoS. That’s what we’ve been calling it. But a police force must be more than one man.”
“What does this have to do with me?” Sev asked, fearing the duke’s answer.
“I want you to join the agency,” Wrathsbury stated.
“I work for Midnight,” Sev answered.
“This isn’t an exclusive position,” Wrathsbury explained. “And your status in Midnight’s fold may serve the purposes of the MoS.”
“I don’t know if I like that,” Sev snarled. “I’m not goin’ t’be a double agent.”
“No. No.” Wrathsbury waved his hands in dismissal. “It’s nothing like that. You just may have contacts with information that would prove valuable to our interests.” Wrathsbury smiled. “I would never ask you to betray our Midnight.”
“Oh.” Sev raised an eyebrow. “Well, I suppose that’s all right, then.”
Silas had been silent through this exchange, and his expression unnerved Sev. He could tell Wrathsbury was wondering what Silas was thinking as well. “What do you think, Mr. Kettlebent?” Wrathsbury asked.
“I’m not sure, to be honest,” Silas said with a scratch to his chin. “Sev would make a fantastic agent, but I worry about his ties to the underworld.”
“Undertown, not Underworld,” Sev responded snarkily.
“Sev,” Silas began.
Sev held up a hand to stop him. “Just playin’ devil’s advocate. I’m not really a joiner, William. That’s not t’say I’m not willin’ t’help out.”
Wrathsbury winked at Sev. “I knew you wouldn’t let the Queen and Crown down.”
“And I knew he’d never join MoS,” Silas added.
“Who do we stop?” Sev asked. “Who needs t’be eliminated, removed, or what have you?”
“What?” Wrathsbury asked, flabbergasted.
“Who’s our target?” Sev asked. The last time they had Fairgate. Surely there was someone to stop this time as well.
“We don’t have a target,” Wrathsbury stated.
“Not a single target,” Silas added.
“Wait. There’s no ‘Fairgate’ to take out?” Sev asked.
“No.” Silas stood suddenly.
“There’s nearly an entire government that must be dealt with,” Wrathsbury answered.
“How are we supposed to do that?” Sev asked.
“You’ll have to make friends,” Wrathsbury told him. “You’ll have to find those who are loyal to the North and infiltrate the South. You’ll have to determine who can be trusted.”
“We can do that.” Silas nodded.
“Can we?” Sev asked. “I’m not so sure.”
“You’ll have whatever resources you’ll need at your disposal,” Wrathsbury assured him.
“Forgive me, Your Grace,” Sev responded, “but this doesn’t seem like something we can throw money at and make it go away.”
“Touché.” Wrathsbury chuckled. “I try terribly hard to put myself in the positions of others, but I can’t help but revert to my aristocratic ways.” He paused and poured himself more scotch. “That’s why I appreciate other opinions, Seven.”
“Well, my opinion is: this is hopeless.”
“I appreciate that, but I cannot believe it,” Wrathsbury answered.
“I agree,” Silas added.


Sev rubbed his face and raked his fingers through his hair. “I think ye’re both out o’yer bloody skulls.”

Beau Schemery and his robot sidekick quietly fight crime and mediocrity in northcentral Pennsylvania. Beau is attempting to complete six lifetimes in one: he’s been a comic writer/illustrator, an actor and a playwright, as well as an amateur cook and costume-maker. He enjoys sewing, reading, and playing the Xbox when he isn’t crafting exciting worlds for the characters in his brain. Beau is currently a vegetarian and hopes to grow up to be a time-traveling squirrel. He would dearly love to meet a dragon and is reasonably sure that Batman could pretty much beat anybody in a fight.