Audio Book Review: Love You So Hard by Tara Lain 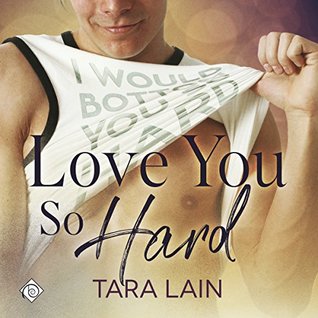 Craig Elson's life has hit rock bottom. Even though he's one of the best strategic planners around, a more confident guy takes credit for his work, and despite being a good-looking man, he suffers insults from the slimiest creep at the bar. Taking care of his beloved mom, who has Alzheimer's, uses all his funds, leaving him in a plain, depressing car...and a plain, depressing life.

Until he sees gorgeous grad student Jesse Randall and his T-shirt that reads "I Would Bottom You So Hard". The message seeps into Craig's soul, and he asks Jesse to teach him to top.

Jesse's had his eye on the quiet hottie who comes into the coffee shop, and he's more than eager to perfect his tutoring. He sets out to get Craig a new job, a new apartment, and a new life so far outside plain and depressing that it's unrecognizable.The problem is, Craig loves his lessons - and his teacher - too much to want to graduate. How can Craig reach the top without losing his sassy bottom?

When Craig Elson gets passed over for a much deserved promotion it's the straw that breaks the camel's back and Craig takes it as a sign that he maybe should take a little vacation after all he hasn't done so in years so he's got the time and then some.

One of the first things that Craig does is he goes to his favorite coffee house so he can get a look at the 'hottie' with the tee shirt that says "I would bottom you so hard." something that no one's ever let Craig do and something that Craig spends a lot of times wanting to do with said hottie (otherwise known as Jesse). When Jesse approaches Craig the last thing that Craig figured would happen is that he'd ask Jesse to tutor him, but that's what he does...he pulls on his big boy pants and ask Jesse to tutor him on how to be a top and what follows is a warm, sweet, sometimes funny adventure of Jesse and Craig as Jesse helps Craig to become the top that he knows he can be.

First off I loved Jesse...he was just too freakin' cute for words...like this guy was seriously adorable and perky...I don't think I could handle him first thing in the morning...just sayin'.  Also on a random thought here, that I'm hoping someone who's more familiar with this authors works than I am can clarify for me. I'm somehow feeling like maybe we've met Jesse before...say, in one of the Laguna Beach stories? If you have a definite answer for me on this feel free to let me know in the comments, thanks.

And then there was Craig, I liked him...a lot! He was just so lacking in self esteem but he was also such a sweet guy. I loved how he was with his mom and really with everyone. What I didn't love was how some people took advantage of his sweet and unassuming nature but hey, what goes around comes around and I think in the end everyone got what they deserved especially Craig and Jesse...because they got each other.


Sadly what took this from 'I love it' to 'it was ok' for me was the sex...I just felt like Jesse and Craig's relationship was too dependent on it and I know all things considered this probably seems a bit weird since their relationship started out with Craig asking Jesse to teach him how to be a top...but, I guess I was hoping that the sex would ease back and there would be a bit more focus on an actual relationship developing...I don't maybe, I'm just being to picky or quirky here but still at the end of the day it's how I felt.

I fully realize that while 'Love You So Hard' isn't a complicated or profound story, it is a sweet, fun and totally feel good story about discovering how to be the best person you can be and finding love along the way and in reality that rarely happens between the sheets so as fun and sweet as it was this left me feeling a little disappointed.

From a purely audio perspective though this was my second chance to enjoy the narrations of Ry Forest and I have to say his narration was absolutely delightful. I truly can't wait to see what's next with this narrator and will definitely be keeping an eye out for his name on future audio books.

An audio book of 'Love You So Hard' was graciously provided by the publisher in exchange for an honest review.