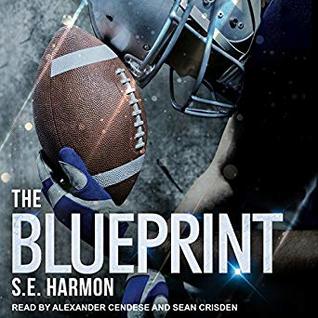 It's going to take hail mary pass for this one to work out...

Britton 'Blue' Montgomery is living the dream. He's the star tight end of an NFL football team and he's got his best friend Kelly Cannon...except lately it seems like Kelly's avoiding him. He doesn't return his calls and just doesn't seem to be himself...Blue's not sure what's wrong but Kelly's been his friend for most of his life and he's not putting up with this. Kelly's damned well going to tell him what wrong whether he wants to or not.

Kelly's life is good. He's got his dream job as a teacher and he's got a nice little place of his own with an awesome family and a great group of friends...especially his best friend...whom he's fallen in love with...his straight best friend.

'The Blueprint' is an enjoyable and entertaining story of coming out/GFY and friends to lovers and I thoroughly enjoyed the relationship between these two men. The banter between Blue and Kelly frequently had me laughing out loud, While the friendship between Kelly and Blue had a very organic feel to it and I found that it really wasn't very challenging for me to imagine that somewhere in this world there's a Kelly and his best friend Britton 'Blue' somewhere trading friendly insults and banter.

I also really liked how these two were there for each other...when Blue was sidelined because of an injury Kelly visited him at the hospital and took him home so that he could convalesce at his house and have someone with him for at least part of the day and someone to be a barrier between him and the world that wanted him to return to the game before his body was ready...Kelly was there to ensure that Blue had the time and quiet that he needed to ensure his recovery was stress free. Something that while the average person may not need it someone who's a high profile personality like a star football player would not only appreciate but probably be in desperate need of.

When Blue finally confronts Kelly and Kelly is honest about how he feels things go from bad to worse for both of them. Blue wants Kelly but being a star NFL football player, he knows that whatever they have can't be out in the open and Kelly as much as he wants Blue, doesn't want to have anything in the closet besides his shoes and clothes.

While I enjoyed a lot of this story I was also a little frustrated with how oblivious to things Blue could be at times. He couldn't be out and with Kelly but damned if he wanted Kelly to be with anyone else. However, in spite of these issues there was no excessive angst and drama in regards to them and I'm good with a character giving me a bit of an emotional roller coaster ride which both Blue and Kelly did at times. Things went back and forth between these two and all things considered that seemed about right for the relationship dynamics. Their best friends who are trying to figure out how to redefine their relationship when they realize that while their feelings are changing neither man is willing to let go of a life long friendship as they try to maneuver through the potential landmines that await them in their efforts to keep their friendship and see what the future holds for them as a couple which leads me to the one issue that kept this from being a 5 star read for me and that was...the ending.

Without going into a lot of details there was one thing that totally kept this from being a 5 star read for me and that was the ending. I just didn't understand some of the choices that were made...especially by Kelly and while I would have at least liked a Happy For Now with a strong promise of a happily ever after what I feel like I got was more like a 'this'll probably all be good'. It just felt like after every thing that Blue and Kelly went through and put each other through things should have been more solid.

'The Blueprint' was narrated by Sean Crisden and Alexander Cendese and while Mr. Cendese is a new to me narrator Sean Crisden is not and I have enjoyed many an audio book narrated by him and this one was no exception to this and happily Alexander Cendese held his own providing me with a totally enjoyable audio book experience that I'm looking forward to enjoying more of in the future when I re-play this audio book and hopefully discover other titles by one or both of these narrators.

An audio book of 'The Blueprint' was graciously provided by the publisher in exchange for an honest review.